Was human DNA found in a sample of Priorix Tetra MMRV vaccine? 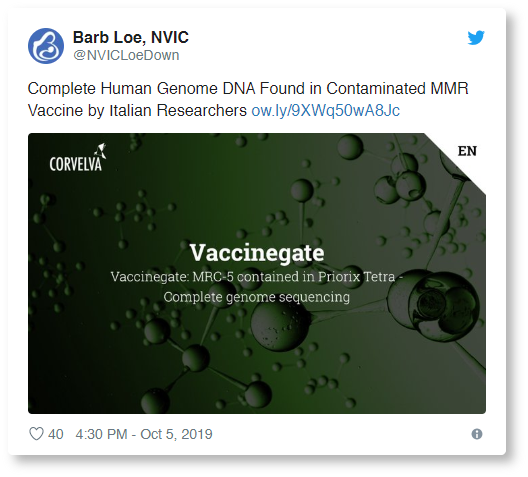 The claim is that a group of scientists from Corvelva tested a sample of MMRV and determined that it contained human DNA.

Here is the article linked in the tweet, which provides links to the source Corvela and their report pdf.

Results
The human reference genome was found to be matched by 99.76% reads from vaccine DNA, that means nearly in all its entirety. The human fetal DNA presented in this vaccine is a single entire genome, that means the vaccine contains genomic DNA with all the chromosomes of a male individual (in fact MRC-5 originates from a male fetus).

For context, from the full report:

Below is an extract of the document kindly provided by Dr. Theresa Deisher:

● The rubella portion of the MMR vaccine contains human derived fetal DNA contaminants of about 175 ngs, more than 10x over the recommended WHO threshold of 10 ng per vaccine dose.

● No other drug on the market would receive FDA approval without thorough toxicity profiling (FDA follows international ICH guidelines) -> this was never conducted by the pharmaceutical industry for the DNA contamination in the MMR vaccine.

● Vaccines produced with human fetal cell lines contain cell debris and contaminating residual human DNA, which cannot be fully eliminated during the downstream purification process of the virus. Moreover, DNA is not only characterized by its sequence (ATCG), but also by its epigenetic modification (e.g. DNA methylation pattern etc.). This decoration is highly species specific, which is why non-human DNA will be eliminated, while this is not necessarily the case with fetal human DNA.
Injecting our children with human fetal DNA contaminants bears the risk of causing two well-established pathologies:

The results that we obtained in this first part of sequencing of the complete MRC-5 genome present in the vaccine (the second part is the sequencing of the entire genome of the MRC-5 cell line used to cultivate the vaccine virus and the comparative analysis with the Fetal DNA vaccine) considerably strengthen the experimental observations of Dr. Deisher and above all the fact that the contaminating fetal DNA present in all the samples analyzed in variable quantities (therefore not controlled) is up to 300 times higher than the limit imposed by the EMA for the carcinogenic DNA (10 ng / dose, corresponding to the DNA contained in about 1000 tumor cells, obtained on the basis of a statistical calculation, while the precautionary limit is 100 pg / dose) limit that must necessarily be applied also to the fetal DNA that inevitably contaminates the Priorix ® tetra.

As a consequence, this vaccine should be considered defective and potentially dangerous for human health, in particular of the pediatric population, who is much more vulnerable to genetic and autoimmune damage due to immaturity in their repair systems.

While I can't find info directly related to the Corvelva site claim, there are numerous articles that criticize the claims made by Dr Theresa Deisher.

Such as, via healthfeedback.org Article claiming vaccines cause autoimmunity and autism due to fetal DNA contaminants found unsupported and implausible

Three scientists analyzed the article and estimate its overall scientific credibility to be 'low'. A majority of reviewers tagged the article as: Cherry picking, Clickbait headline, Conflate facts and opinions, Inappropriate sources, Misleading.

This article by Vaccine Impact, published on 19 May 2019 and shared more than 13,000 times, reproduces an open letter written by Dr. Theresa Deisher to legislators about the purported dangers of fetal DNA in vaccines produced with fetal-derived cell lines. The letter claims to discuss “unrefuted scientific facts about fetal DNA contaminants in the MMR vaccine”, founded in large part on a study co-authored by Dr. Deisher herself.

Immunologists who reviewed the open letter found its claims to be unsupported and implausible. They acknowledged that certain vaccines are produced using human fetal-derived cell lines, but pointed out that the study of Deisher et al. does not actually demonstrate that fetal DNA is present in vaccines, let alone in a high concentration, having methodological problems that call into question its findings.

While the letter provides a reference list that appears to lend support to its claims, a closer examination shows that the citations are not used appropriately, being misinterpreted or taken out of context.

Nevertheless, the letter maintains the assumption that high levels of fetal DNA are present in vaccines, coupling it with the fact that Toll-like Receptor (TLR) 9 activates a proinflammatory response upon sensing DNA to claim that fetal DNA in vaccines causes autoimmunity. While it is true that TLR9 is involved in autoimmune diseases, reviewers also explain that TLR9 senses only unmethylated DNA (like that of bacteria and viruses), whereas human DNA would be methylated. This means that even if fetal DNA was present – which was not even proven by Deisher et al. to begin with – it would not be able to activate TLR9 anyway.

They also point out that it is implausible for homologous recombination of fetal DNA after vaccination to cause autoimmunity and autism, since it necessitates a chain of events that are extremely unlikely to happen all together, especially in the biological context of a living person and not the artificial environment of a test tube. Another problem with the claim of insertational mutagenesis is the fact that pregnant women, who have higher levels of circulating fetal DNA constantly over 9 months, do not have a higher incidence of cancer. It is therefore unlikely that mutagenesis would occur in children after vaccination – an event that is spread out over several periods – with much lower amounts of fetal cell line-derived DNA.

The study that Deisher cites is this one.

There's also a critique of the study on Science-Based Medicine here.

Regarding the claim that the human DNA can cause auto-immune diseases, Dr David Gorski addresses this claim on his blog here:

Deisher isn’t the only one who’s been making this claim. For instance, I discussed a similar claim made by Helen Ratajczak, who specified that homologous recombination of fetal DNA in various vaccines with the DNA in babies’ brains results in altered proteins on the surface of neurons, provoking an autoimmune reaction. Homologous recombination is a process by which DNA strands with the same or very similar sequences can break and recombine.

This is an incredibly implausible hypothesis. If the fetal DNA did undergo homologous recombination, it would still be human DNA making human proteins. The body recognizes a cell as foreign or “altered” through the expression of its cell surface proteins. Consequently, the only likely currently known mechanism by which homologous recombination of human DNA from vaccines might conceivably result in such an autoimmunity phenomenon would be if the DNA from the vaccine somehow resulted in the expression of a foreign or altered protein on the cell surface that the immune system could recognize as foreign. That would mean either integrating into the gene for a cell surface protein or producing a cell surface protein itself. While not impossible, that’s pretty darned unlikely to happen on a scale that would affect more than a single cell, a few at most.

24
Was SIDS unheard of before "modern vaccine schedules"?
34
Length of uncoiled human DNA
16
Do corporations own human DNA sequences?
18
Was measles vaccine introduced after the disease was under control
2
Was X-ray crystallography used in DNA sequencing mostly developed by the wool industry?
104
Is 8% of human DNA from viruses?
43
Can an RNA vaccine change your DNA permanently?
5
Are or were aborted human fetal cells used in vaccine production?