Are men more attracted to women who are ovulating over those who are not?

In 2016, a Business Insider article by Rebecca Harrington asserted that there have been multiple studies supporting the notion that men are preferentially attracted to women who are ovulating:

Multiple studies have concluded that men find women more attractive during ovulation. Scientists have had men smell women's T-shirts and underarm patches, and men consistently rate the women who are ovulating as more attractive. It's unclear, however, how powerful this effect might be; other factors that shape our perception of attraction are likely far stronger in the real world.

This is a notion that is also asserted by Professor Janet E. Smith in the podcast Contraception: Cracking the Myths:

However, given the exagerated claims from some perfume industries that pheromones can cause someone to be more attracted to them, I am wary of the assertions made in the article and podcast. The sentence "other factors that shape our perception of attraction are likely far stronger in the real world" prompted me to ask this question.

Yes, although it is generally said that humans do not have estrous cycles in the way most mammals do, there are indeed multiple peer-reviewed studies suggesting that people (not just men, and in some cases other women especially) find ovulating women more attractive. The mechanisms for this are multiple, including both physical and behavioral changes. However, I should emphasize that the effect of each mechanism tested in various experiments is generally small but still enough to be considered statistically significant.

I have no particular expertise in psychology, physiology, etc. so I'm just going to dump some references and findings here without trying to analyze their methodology in depth. The articles I provide full references for are readily available on the open web.

This study follows up on earlier research regarding physical attractiveness.

The authors of this particular study used pairs of images of women and had both men and women rate their attractiveness. The article provides a detailed explanation of how the experiment was controlled. Here are sample images provided in the article, in which the women on the right (column "ii") are ovulating. Although I don't personally see a noticeable difference in attractiveness here, I do think the subtle changes in skin tone and symmetry of features described above are perceptible here if you are looking for them. 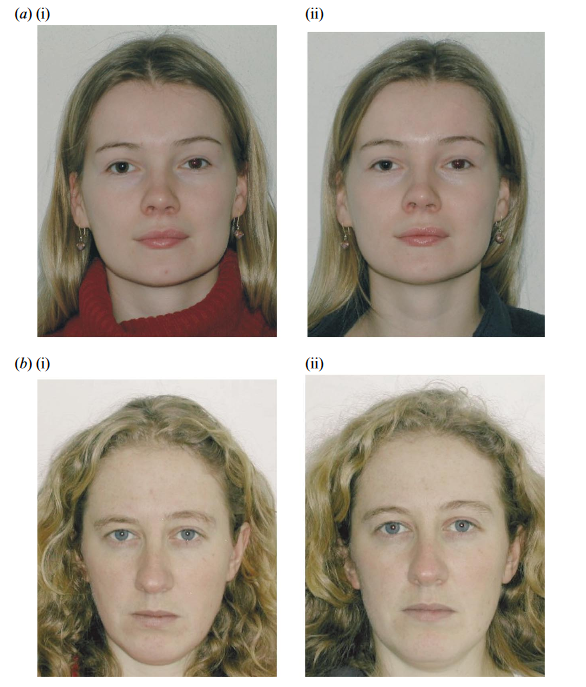 Here is an excerpt of the authors' conclusions:

Our results indicate that the perceived attractiveness of womens’ faces varies across the menstrual cycle and is higher in the periovulatory than in the luteal phase. This increase in facial attractiveness is clearly subtle and the mean effect size is small. [...] Our results also show that potentially additive information about the stage of the menstrual cycle is available in hairstyle and/or condition (hairstyle was usually but not always constant across the two samples). Surprisingly, this information appears to be used only by other women, suggesting that women may be more aware or better able to discriminate these subtle differences, and that men might fail to detect some available cues to fertility.

This study focuses on how women dress when they are ovulating. It suggests that these women are more likely to wear "nicer" clothes, lacy tops and short skirts that expose their legs. Male and female judges were asked to look at photos of women and to rate whether the women in the photos were "trying to look attractive". The faces of the women were concealed. Here is a plot of the data showing a correlation between this and their estimated days to ovulation. 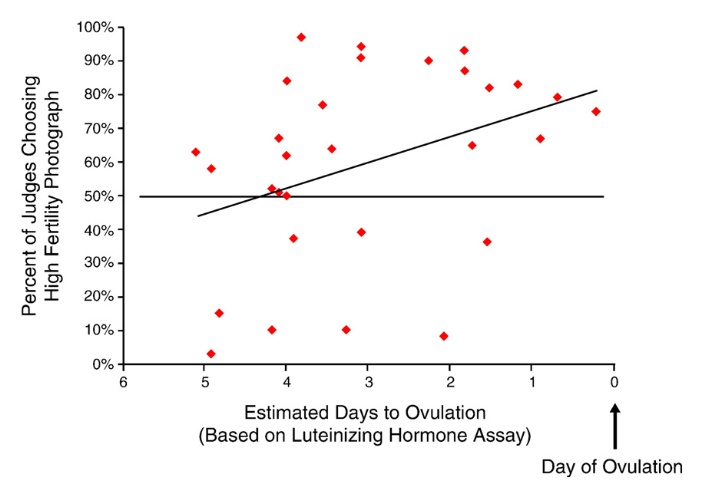 In this study, a blind smell test showed that men preferred the body odor of the same women when they were ovulating over when they were not at "above-chance levels" (56%). The study also looked at men's ability to discern the scents of ovulating and non-ovulating women; where that discernment was more accurate, the preference was stronger. A number of earlier studies have also supported the hypothesis that odor plays a role in the attractiveness of ovulating women.

This one documents an increase in the pitch of women's voices just before ovulation. It does not measure whether it effects the perceived attractiveness of the voice.

This is a small-scale economic study of tip earnings by 18 lap dancers.

In their analysis, the authors argue that this is more likely due to "cyclic shifts in women's attractiveness are driving our tip earnings results—rather than the well-documented shifts in sexual receptivity, proceptivity, or selectivity for good genes".

This one is a small meta-study which finds "that there are discernible cues of fertility in women’s social behaviors, body scents, voices, and, possibly, aspects of physical beauty." Here is a graph comparing the results of various studies. It suggests that the effect of a change in voice is small compared to scent and behavior. 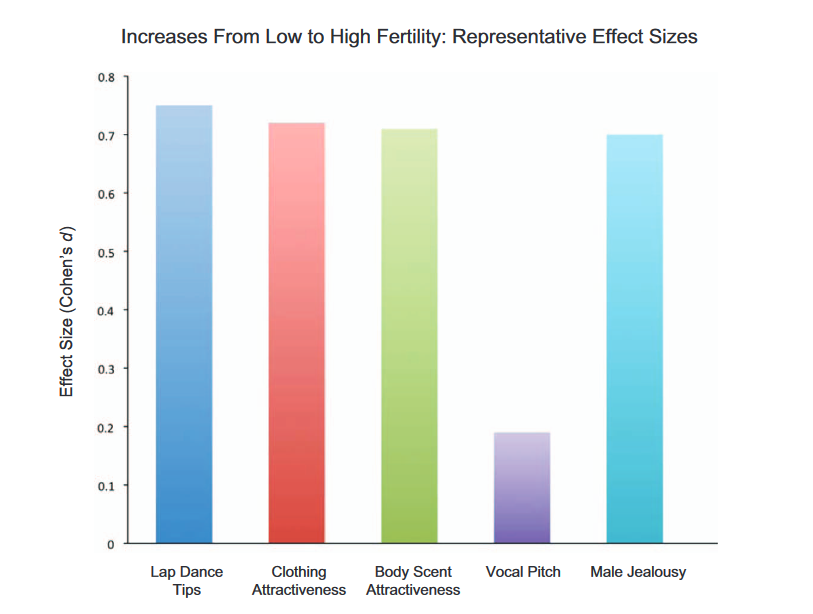 Not the answer you're looking for? Browse other questions tagged physiology behavior fertility menstrual-cycle .

12
Do the "rhythm" or "standard days" methods of birth control eventually cause more embryonic death than other methods?
11
Can men mentally rotate images better than women?
17
Are sperm counts in men decreasing significantly?
18
Are women more sensitive to high-pitched noises than men?
29
Do women who live together get synchronized menstrual cycles?
14
Are specific scents sexually attractive to women or men?
11
Do women have smaller bladders than men?
20
Can lions sense menstruating women?