Was there a trial by combat between a man and a dog in medieval France?

This website makes the claim that in 1400 a man by the name of "Chevalier Maquer" fought in a judicial duel against a greyhound, after it was suspected that Maquer had killed the greyhound's owner. 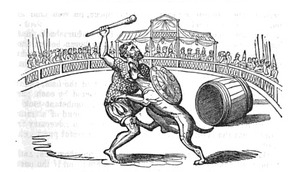 In France, a very interesting judicial duel was fought in 1400 between a suspected murderer and his accuser, a dog. When Chevalier Maquer killed Aubrey de Montdidier in the Forest of Bondy, near Paris, he figured he would get off scott-free since the only witness to the crime was Montdidier’s greyhound... the dog went back to town to a friend of his master’s and led the friend to the spot...

Not too long after his former master’s murder, the dog came into contact with Maquer and attacked him viciously... This began to draw suspicion from the dog’s new owner and others and eventually it was brought to the king. His Royal Highness came to the conclusion that the behaviour of the dog was actually an accusation and arranged for the single-combat trial. The fight took place on the Ile de France in Paris...

Are there any reliable historical sources to back this up or at least verify that it is a legend from that time period?

The oldest source that I can partially access is Dueling: The Cult of Honor in Fin-de-Siècle Germany which references The Duel: A History of Duelling, which I can't access. The latter is from the 1970s.

This appears to be a folk tale with little contemporary evidence of the event actually happening, but the tale itself does seem to date to the 15th century.

According to Volume 17 of the 1911 Encyclopedia Britannica, the tale is told in a few ways:

MACAIRE, a French chanson de geste. Macaire (12th century) and La reine Sibille (14th century) are two versions of the story of the false accusation brought against the queen of Charlemagne, called Blanchefleur in Macaire and Sibille in the later poem... Macaire is the product of the fusion of two legends: that of the unjustly repudiated wife and that of the dog who detects the murderer of his master. For the former motive see Geneviève of Brabant. The second is found in Plutarch, Script. moral., ed. Didot (1186), where a dog, like Aubri's hound, stayed three days without food by the body of its master, and subsequently attacked the murderers, thus leading to their discovery. The duel between Macaire and the dog is paralleled by an interpolation by Giraldus Cambrensis in a MS. of the Hexameron of Saint Ambrose. Aubri's hound received the name of the “dog of Montargis,” because a representation of the story was painted on a chimney-piece in the château of Montargis in the 15th century.

Further evidence of this tale can be found in the 1814 French play The Dog of Montarges:

That night, in the Forest of Bondy, through which Aubri with his dog, Dragon, is passing to deliver a packet on behalf of the Colonel, Macaire and Landry attack and murder Aubri. They bury his body, confident that nobody witnessed the crime. Dragon runs away and Macaire and Landry flee the scene.

However in that rendition there is no judicial fight:

In the end he needs help from Aubry's dog Dragon, which is also mute. The dramatisation does not end in a fight like the legend; the mythical narrative is replaced by a search for clues like a modern detective story. The dog is killed by Aubry's foes, but the murderer is recognized by using a belt with which he had tied the dog on the scene.

And in case you ever take a trip to the town of Montargis in France, you can visit two landmarks commemorating the legend: a stained glass window of a similar style to the image in the claim, and a bronze statue in the courtyard of city hall.

As a side note, the general tale of "dog helps finds those who murdered it's master" predates this french tale by more than a thousand years. As told by Plutarch in On the Intelligence of Animals in the mid-1st century:

And King Pyrrhus on a journey chanced upon a dog guarding the body of a murdered man; in answer to his questions he was told that the dog had remained there without eating for three days and refused to leave. ... But when it saw its master's murderers filing past, it rushed at them with furious barking and, as it voiced its accusation, turned to look at the king so that not only he, but everyone present, became suspicious of the men. They were at once arrested and when put to the question, with the help of some bits of external evidence as well, they confessed the murder and were punished.

A book, The 14th Century, seems to back the claim up somewhat, but places the duel earlier than 1400, during the reign of Charles V of France, which was from 1364 until his death in 1380.

The book in question, which is available from the Library of Princeton University, gives greater details and was written in 1869.

The relevant portion is reproduced here

The Chevalier Maquer, in sight of all Paris, entered with a dog in mortal combat. The spot which was the scene of the singular encounter is still shown.

Maquer made a thrust, but the dog, springing aside, seized him by the throat, and threw him down. Thereupon the villain confessed his crime, and Charles, in order that the faithful animal might be handed down to posterity, caused to be erected to him, in the forest where the murder was committed, a marble monument, with a suitable inscription.

It should also be noted that, according to multiple sources, the last Trial by Combat in France took place in 1386, 14 years before the date in the story.

7
Was there a deep US involvement with Saddam, Osama and Gaddafi?
15
Did Benjamin Franklin almost cause a war between England and France over a hoax letter to a London newspaper?
5
Is there an alignment between Giza pyramid complex and Orion's Belt?
7
Was there a co-regency of Tiberius and Augustus?
7
Was there a "samurai duel" between a Montenegrin and a Japanese warrior?
20
Were there no "white" people in Virginia between 1619 and 1679?