The Milankovitch Cycles is the effect on the climate caused by variations in astronomical movements by the Earth relative to the Sun.

A recent Natural News article attributes of the recent effects of climate change to Milankovitch Cycles:

For more than 60 years, the National Aeronautics and Space Administration (NASA) has known that the changes occurring to planetary weather patterns are completely natural and normal. But the space agency, for whatever reason, has chosen to let the man-made global warming hoax persist and spread, to the detriment of human freedom.

I read through the linked NASA articles but I didn't find anything corresponding to warming of the Earth whatsoever.

Another example of the claim: Hal Turner Radio Show article

The articles try to do some sleight-of-hand poorly. It goes on at great length about the accepted Milankovitch cycles (mostly taken straight from the NASA article, the same agency which is supposed to be untrustworthy) to pad its scientific credibility. Then leaps to its conclusion while providing no evidence, instead banging on about conspiracies.

The article itself contains the central problem with their thesis.

“… orbital variations remain the most thoroughly examined mechanism of climatic change on time scales of tens of thousands of years and are by far the clearest case of a direct effect of changing insolation on the lower atmosphere of Earth.”

(Note that Milankovitch cycles' effect on long-term climate is not clear. This quote is pulled, out of context, from 1982, 37 years ago. We've gotten better at climate science since.)

Milankovitch cycles happen on a scale of tens of thousands of years. And we are indeed in an interglacial warm period. However those long-term cycles do not explain the observed temperature variations in mere decades.

Furthermore, the observed changes in solar radiation, 0.05 Watts/m^2, do not match with the change necessary to produce the observed climate change of about 2.8 Watts/m^2. 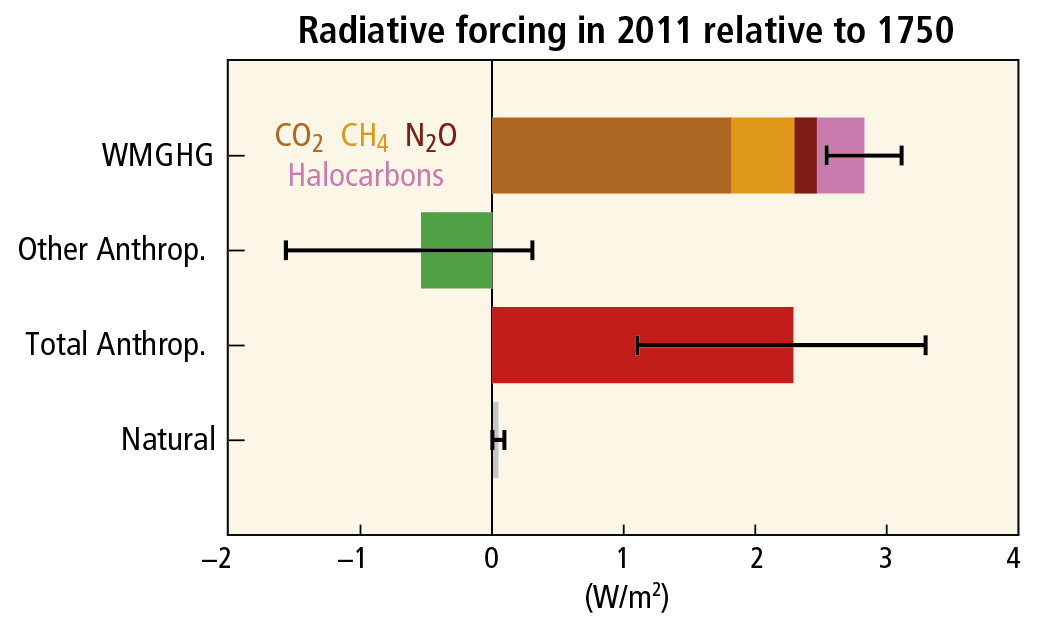 These sort of "gotcha" articles come from a gross misunderstanding of how climate models work. They disingenuously expect naivety on the part of thousands of climate scientists to not have included something as obvious as Milankovitch cycles in their models while offering no models of their own.

Good climate models contain known natural and human factors. They include radiative forcing, changes in how much energy we receive and retain from the Sun. These include the very well known Milankovitch cycles. The models which exclude human factors do not match our observations. The ones which do include human factors match.

As you can see, solar variability is a component of their model and does not explain the recent warming trends of the last couple decades.

The Union Of Concerned Scientists has this to say about the effect of solar radiation on climate change.

In its Fifth Assessment Report, IPCC scientists evaluated simulations of historical climate variables using a number of numerical models. They first assumed no increase in heat-trapping gases since 1750, so that the temperatures calculated were those that would have been achieved if only solar variability, volcanic eruptions, and other natural climate drivers were included.

The temperature results were similar to observed temperatures only for the first half of the century, but the models did not accurately show the general warming trend that has been recorded during the second half of the twentieth century.

When computer models include human-induced heat-trapping gases, they accurately reproduce the observed warming during the twentieth and twenty-first centuries.

The evidence shows that although fluctuations in the amount of solar energy reaching our atmosphere do influence our climate, the global warming trend of the past six decades cannot be attributed to changes in the sun.

No, there is no proof that the Milankovitch Cycle fully explains the current global warming tendencies. The article you linked to includes a sensationalist headline which the article itself makes no attempt to support, and in fact explicitly denies. The headline states:

NASA admits that climate change occurs because of changes in Earth’s solar orbit, and NOT because of SUVs and fossil fuels

However, the article itself makes no such claim, instead merely asserting that NASA observed in 1958 that changes in the earths orbit and tilt cause warming and cooling of the climate, and published information about the Milankovitch Cycles on their website in 2000. It goes on to explain the discovery and gradual acceptance of the Milankovitch Cycle theory, which is now the accepted explanation for the glacial and interglacial cycles on earth over the past million years or so as explained here, for example.

The article contains many sensationalist statements, but they are all the words of the author, rather than anything sourced from NASA. The article directly contradicts its own headline with the statement

But NASA has thus far failed to set the record straight, and has instead chosen to sit silently back and watch as liberals freak out about the world supposedly ending in 12 years because of too much livestock, or too many plastic straws.

So clearly, NASA has not "admitted" that climate change is "...NOT because of SUVs and fossil fuels."

No. The problem is the unfortunate use of the weasel-worded term "climate change" when people really mean global warming, and almost always ANTHROPOGENIC global warming.

Milankovich cycles do a pretty good job of explaining past changes in climate. That climate change is a natural process driven in large part by those cycles. (Though of course there are other factors.) Global warming is the result of humans adding lots of CO2 to the atmosphere by burning fossil fuels. Not related to the Milankovitch cycles at all - indeed, IIRC the natural cycle should have the planet in a very gradual cooling trend: https://en.wikipedia.org/wiki/Milankovitch_cycles#Present_and_future_conditions

This means that the well-known curves that show a correlation between temperatures and CO2 in the atmosphere in a time frame of hundreds of thousands of years -- the classic Al Gore curve -- shows CO2 varying as a consequence of changing sea temperature, not temperature varying due to changes in CO2. We know very well about this mechanism -- when oceans get warmer, CO2 is released from the water into the atmosphere and vice versa.

We also know about the greenhouse effect, but if those two mechanisms: CO2 moving between sea and air, and the greenhouse effect, were the two dominating factors, the climate would run amok as soon as we got a shift in balance, since they provide positive feedback to each other. In other words, there are also other factors.

Climate is very complex, and the subject of clouds alone is both very important and difficult to understand. Clouds can both make the earth hotter and cooler, depending on time of day, altitude, type of cloud etc. We're slowly learning more about this. For instance, the CLOUD experiment at CERN is discovering new things about the formation of clouds. It turns out that there are a number of different things that can act as cloud seeds, or enhance cloud formation. Both cosmic rays (which can be blocked by sunwind) and aerosols emitted by forests contribute to cloud formation.

If we look many millions of years back, we know that temperatures have gone up and down at different times, and neither Milankovich cycles nor CO2 explains it all. Other factors that impact climate are volcanic activity, as well as meteorites, but we're pretty sure dramatic biological changes have also had dramatic impact on the climate through time.

Not the answer you're looking for? Browse other questions tagged climate-change nasa .

150
Do human activities contribute to climate change?
21
Are the 16 scientists who claim that climate change is not something to worry about climate scientists?
31
Does this graph show climate-change predictions don't meet observations?
15
Is climate change currently good for the world economy?
20
Have global surface temperatures not shown significant warming since the late 1990s?
205
Is this news article from 1912, essentially explaining climate change, real?
12
Is the "walrus scene" a result of climate change?