Has no UK party won a majority of seats with around 35% of the popular vote?

In Yahoo news from today, it is said that despite the Conservative party's lead in opinion polls, it is headed for a hung Parliament. One of the arguments is that

The statement doesn't actually quantify the current share of the Conservative party, but from the (2nd) graph in the article it's somewhere between 30-35%.

So, is this a correct statement regarding UK (electoral) history?

The claims appears historically correct at least for elections since 1918, given this (official) graph: 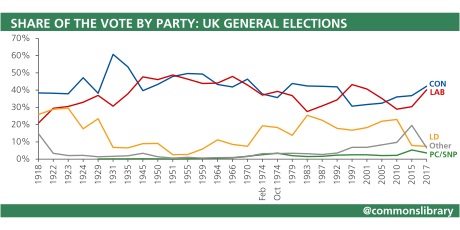 One of the low points in the graph, the February 1974 election, which brought minority Labour government in power, had the popular vote breakdown as 37.9% Conservative and 37.2% Labour. Labour had won more MPs, but still short of a majority of seats.

So the margin by which this history claim is correct is pretty small if we take the (current) Conservatives vote share reaching 35%.

Finally, if I'm also permitted a comment on the inference from the news piece, given that Farage set out the terms under which his party won't contest the seats that the Conservatives could win (basically he just called Johnson to embrace a no-deal Brexit), and given the share of the voting intention for Farage's party is around 15% (again from the Yahoo news piece), concluding that Conservatives cannot win a majority in the current circumstance seems rather tenuous. For more context, in 2015 Farage's party did contest the election and won 12.6% of the popular vote, but only one seat.

11
Did the Donner party resort to cannibalism while snowbound in 1846-7?
48
Has India invaded any country in the last 10,000 years?
57
Did the UK slip to sixth largest world economy from fifth, less than 24 hours after the EU referendum vote?
9
Has freedom of movement of people lead to a reduction in wages and worsening of working conditions in the UK?
3
Did The Beatles write “Norwegian Wood” after hearing Bob Dylan's “4th Time Around” as claimed by producer Al Kooper?
7
Did the Roman senate vote to declare Julius Caesar had been born of a virgin?
3
Has the Labour Party in Tottenham required in-home visits for Jews to join, at least in the instances described below?