The BBC (March, 2019) says Hungary's border fence with Serbia consists of "170 km of electrified barbed wire" (at 0:30-0:35 in the video). 170km is basically the whole length of the border between these countries, and the BBC phrasing strongly suggests to me most of this fence is thus electrified.

Interestingly enough however, Wikipedia doesn't mention this electrification at all...

I'm not doubting some sections are electrified, the BBC has the warning signs: 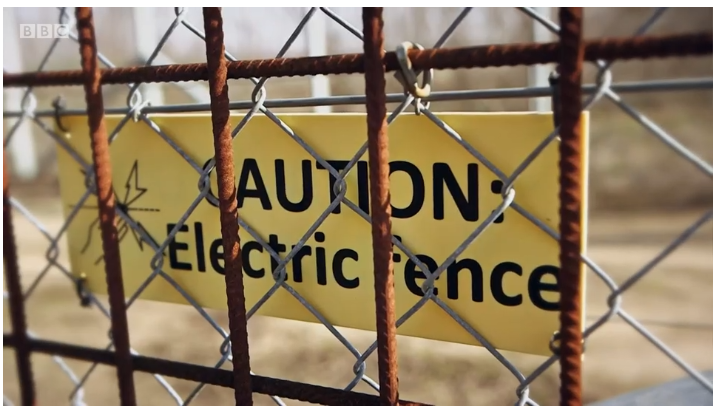 But is it really all/most of the fence that's electrified?

Gyorgy Bakondi, chief security advisor to the Prime Minister, confirmed that the fence was not electrified and such a move had never even been considered [...]

So I'm even more confused now... I did find one first-hand account from a refugee, as reported in 2018 by the NBC, which seems to contradict the Hungarian statements on electrification...

A dozen men, mostly from Iran, Afghanistan and Pakistan, were sitting last week in the shade of a disused farmhouse near Horos. Inside, several more cooked fresh flatbreads over a makeshift fire.

“We have been in Hungary many times but the police there beat us and throw us back,” said Ali Asan, a 33-year-old policeman from Lahore, Pakistan. “The fence has electricity so if we touch it it hurts our arms and burns our eyes.”

So some of these reports are probably not accurate or not up to date... The question is which...

On June 15, 1961 Walter Ulbricht, First Secretary of the Socialist Unity Party of Germany, Chairman of the State Council, Chairman of the National Defense Council declared in a well known press conference, that "Nobody has the intention of building a wall".

On May 15, 2017, Gyorgy Bakondi, so called 'chief security advisor' to the conspiracy theorist Orban, far-right head-of-state in Hungary, declared the Déli határzár Magyarországon ("Southern Border Lock" or "Hunagrian Border Barrier", aka 'the fence') would not be electrified. This news bulletin was published by the official Hungary portal 'About Hungary'

Hungary's border fence is "not electrified"

Not many other sources tell this story. In fact none?

But looking at the fence system one finds signs telling otherwise.

Not openly advertised is the fact that portions of the fence with Serbia today are wired to deliver non-fatal electric shocks. Government officials were reluctant to discuss electrification of the fence, preferring to not even acknowledge it, but also did not deny that it is electrified.
–– Progress Report from Hungary's Fenced Borderlands What America can learn from a small nation that stopped mass migrant caravans cold. By Todd Bensman on April 3, 2019. Center for Immigration Studies. 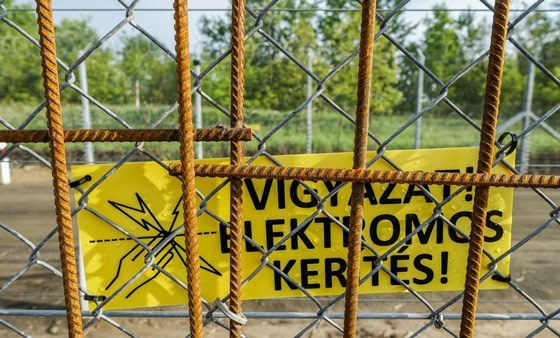 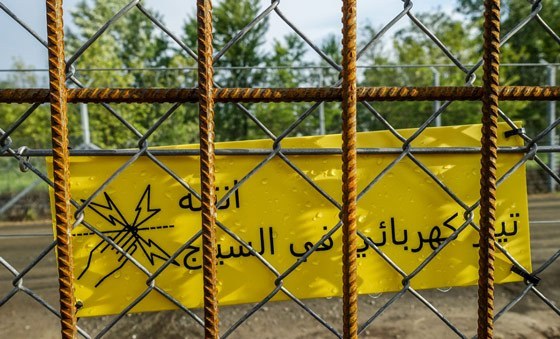 To these signs in Arabic the Government makes contradictory statements on electrified border fence (Budapest Beacon):

“The truth is that the border fences are not being electrified,” the ministry said in a formal statement, after initially sending contradictory messages to domestic and foreign media outlets. The statement goes on to describe an electric system that has been installed, as Index described, along the border:

“A security alarm system capable of locational detection, and which operates using low-voltage electric impulses, has been set up along a 10-kilometer stretch parallel to the double border fence. The alarm system has been rated for protection against electric shock, and in accordance with the related regulations the international rating agency has declared it incapable of endangering human health.

“Some work-related injuries have occurred during the establishment of the alarm system.”

The Ministry’s explanation did not account, however, for the appearance of warning signs in three languages along the fence about the dangers of electricity.

“It is due to mandatory occupational safety regulations,” a spokesman for the Hungarian government told the Budapest Beacon Monday morning…

The Hungarian National Police declined to comment, referring to the Ministry of Interior’s Friday statement.

He pointed out that Hungarian Prime Minister Viktor Orban, a staunch anti-immigration nationalist who easily just won a third term, had ordered $1 billion in electrified fencing equipped with cameras and heat sensors to keep out migrants.
–– Trump isn't the only one who wants to build a wall. These European nations already did. Kim Hjelmgaard USA TODAY Published 6:30 AM EDT May 24, 2018

Last December, the artist traveled to the fortified border fence that Hungary had raised along its southern border with Serbia to keep out migrants and asylum seekers. The barbed-wire is capable of delivering electric shocks and is equipped with heat sensors, cameras and loudspeakers that shout inhospitable messages in several languages.
–– Cutting through the ‘smart’ walls and fences of Fortress Europe, Regine March 4, 2019

The requirement for "entirely" raised in the question seems unwarranted. The fence is built to this spec, and perhaps damaged here or there, perhaps unfinished in a few parts. After all, Orban wants the EU to pay for it. So, what? Orban's Hungary has built an electrified iron curtain since 2015 and wants to upgrade and extend it ever more. Some reports not mentioning electricity seems not notable as the/any fence itself is the scandal in a Schengenised Europe? As the Hungarian source linked above has Orban on record that he wants this border fortification "with weapons", that is the culprit for this question.

We now know that Ulbricht quite blatantly lied when talking about the wall in Berlin. We also know that Gyorgy Bakondi lied, and that the Hungarian government keeps on lying with "no it's not, we never entertained the idea" as it keeps this statement online to this day, uncorrected on their official outlet to the world. As that is not just "old news":

A far-right mayor is hailing the success of a new border fence, saying it has protected Hungary from mass immigration.

“It saved my town,” said László Toroczkai, whose community on the border with Serbia was at the center of a wave of migrants in 2015 seeking better lives in the West. “Calmness has returned.”

He was one of the loudest voices in a campaign that convinced Hungary’s government to build two parallel 10-foot-high razor-wire electric fences at the border, which also doubles as a frontier for the European Union.

“We have been in Hungary many times but the police there beat us and throw us back,” said Ali Asan, a 33-year-old policeman from Lahore, Pakistan. “The fence has electricity so if we touch it it hurts our arms and burns our eyes.”

Theresa Gielissen, 28, a language instructor at the University of Szeged who is originally from Wisconsin, said electrified border fences were “unconscionable.”

She added: “Every time you build a wall like that, you create an enemy. The arguments about preserving culture from immigration are just xenophobia.”

Daniel Nyikos, 33, an assistant professor at the university, said the lessons of history 30 years ago, when the collapse of Communism led to the fall of the Berlin Wall, appeared to have been forgotten.

“1989 was a moment of hope as walls were torn down in this part of the world,” he said. “Now we are making huge fences again, here and in Mexico, and it seems we have not learned anything.”

–– Far-right mayor hails success of Hungary-Serbia border fence The modern-day iron curtain stretches for 100 miles and is patrolled by soldiers, dogs, and 3,000 border police. NBC News, May 2, 2018, By Alastair Jamieson

More details of what Hungarian officials told in differing stories to Hungarian reporters and more Western inquirers is detailed in Áramot vezetnek a határkerítésbe (index.hu, 05/12/2017. 1:57 by András Földes.

The chauvinist Jobbik plotician László Toroczkai, Hungarian mayor of the Ásotthalom municipality proudly presents himself in front of this: 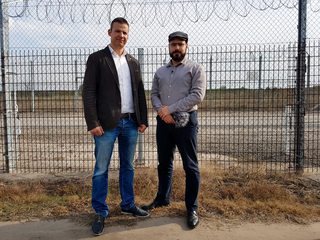 László Toroczkai: Three years ago I was saying the same thing as now, and I’m sure I’m absolutely right on this point: migration seems impossible to stop, migrants will continue to flock, migrate to Europe. And that will concern this place too. But we control the situation. It is possible to pass the barrier, it still happens time to time, but what matters is that when it happens, we know it, the police know it live. For example, there is an electrified fence behind me – which of course has led to a lot of criticisms. Well, this fence is intended to detect passages, and it is less painful to the touch than an ordinary electric peasant fence.
–– Visegradpost (Ferenc Almássy met the famous mayor on the border between Hungary and Serbia, where Mr Toroczkai got the idea of ​​the barrier. Interview conducted mid-October 2017.)

Not the answer you're looking for? Browse other questions tagged immigration europe hungary .

8
Is the border fence basically complete as Obama said, and did they go above and beyond what was requested?
16
Did the EU threaten to sue in connection with “Comic Sans” having an eye on the Euro symbol?
7
Did Palestinians from the PA with family reunification based IDs engage in terror activities, pre-2003?
23
Have the rich Arab states accepted almost no Syrian refugees?
5
Is Mexico building a southern border wall that the United States is helping to pay for?
12
Is the UK's trade with the EU artifically inflated by having to ship its exports via Europe?
34
Are there 2-3m illegal migrants with criminal records in the USA?
3
Were men in the USA, from Muslim countries, required to register with the federal goverment?