Did the US Climate Reference Network Show No New Warming Since 2005 in the US?

I believe most are aware of the difficulties on surface based temperatures. Gaps in thermometer placement and reliance on extrapolation, placement near HVAC unit, cities and other heat sources or sinks, data manipulation and the like.

In a very recent article, Real Clear Energy tells us about a new development:

So 12 years out some preliminary results are coming in.

Strikingly, as shown in the graph below, USCRN temperature stations show no warming since 2005 when the network went online. If anything, U.S. temperatures are now slightly cooler than they were 14 years ago.

Is it true that this more accurate measuring system concludes there has been no warming in the US over the last decade?

Some of the raw data should be here:USCRN

No, the USCRN is not sufficient to provide evidence of any discernible trend

The linked article says "as shown in the graph below," and provides this image: 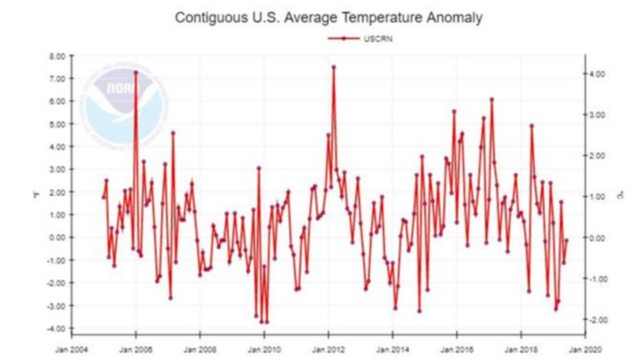 This chart plots monthly data points, which is hard to parse just by looking at it. The article does not include any numerical analysis of the data set, or description of what the chart is showing.

A temperature anomaly is the difference from a baseline value. In this case, the background details of the data set explain that the anomalies are relative to the 30-year average from 1981 to 2010.

Even looking at the monthly data we can see that more points are above 0 than below, and the magnitude of the anomaly is generally greater in the positive direction than the negative. So even if the chart didn't show warming during this 12 year period, it is showing warming compared to the baseline period from 1981 to 2010.

This is made even clearer by looking at the annual plot. The data is available for plotting from the National Temperature Index Time Series plotter. 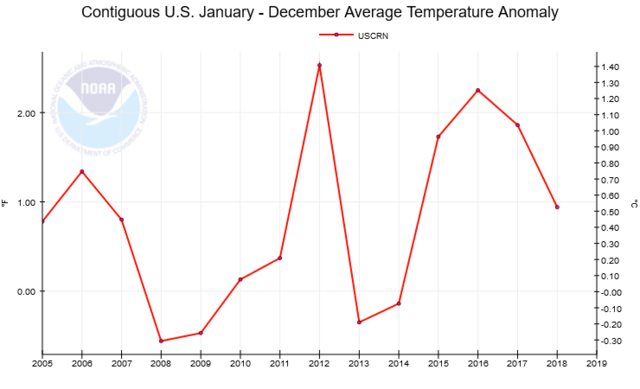 For all but four years, the anomaly is positive, and the magnitude for positive years is far greater than the negative years.

With the annual data the trend is more obvious, but by adding a trend line to the monthly data, we can see that there is a warming trend: 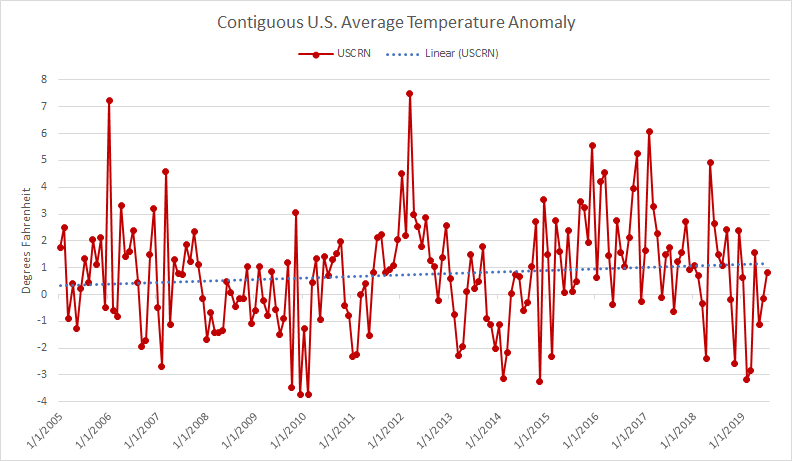 Regardless of whether this can be said to provide evidence of global warming, it does counter the source's assertion that

U.S. temperatures are now slightly cooler than they were 14 years ago.

Additionally, the USCRN data set, which the author cites in support of their argument, is basically the same as the supposedly unreliable USHCN data which it replaces (this is explained a bit more in the Watts Up With That article that seems to be the original source).

Here's the annual data going back 20 years, including both USCRN and USHCN data sets: 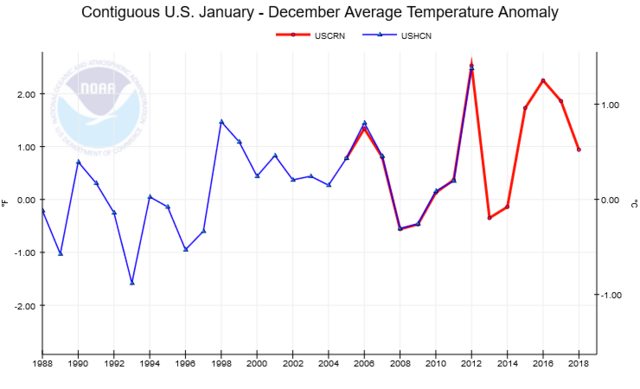 As several have noted in the comments, whether this narrow data set indicates a warming trend or not, does not directly provide evidence about whether the global temperature is rising (which the linked article is attempting to argue against). The geographical (one country) and historical (one decade) context is far too limited, both as evidence for a global trend, and to be able to separate noise in the data from an overall trend. However, it is clear that the original analysis is incorrect.

The period concerned is too short to meaningfully say whether there has been warming, cooling or that temperatures have been broadly constant. The uncertainty in estimating the trend from noisy data is obviously too high.

Is it surprising that the USCRN data shows no clear warming over this period? No, not particularly.

In order to reliably detect a trend you need a long enough period of time for the trend to dominate over the noise (as the noise averages out to around zero in the long term, but the trend does not) (in statistics, this is known as having sufficient statistical power). The smaller the spatial area involved, the more heavily it will be affected by sources of "weather noise" such as ENSO (which affects the Americas quite strongly). This is because averaging tends to attenuate noise, and the more of the globe over which you average, the more local sources of weather noise are likely to cancel out. For global temperatures, at least 17 years is needed to reasonably expect to be able to detect a trend, so 12 years for a regional time series is obviously not going to be sufficient.

Separating signal and noise in atmospheric temperature changes: The importance of timescale

1 We compare globalŌĆÉscale changes in satellite estimates of the temperature of the lower troposphere (TLT) with model simulations of forced and unforced TLT changes. While previous work has focused on a single period of record, we select analysis timescales ranging from 10 to 32 years, and then compare all possible observed TLT trends on each timescale with corresponding multiŌĆÉmodel distributions of forced and unforced trends. We use observed estimates of the signal component of TLT changes and model estimates of climate noise to calculate timescaleŌĆÉdependent signalŌĆÉtoŌĆÉnoise ratios (S/N). These ratios are small (less than 1) on the 10ŌĆÉyear timescale, increasing to more than 3.9 for 32ŌĆÉyear trends. This large change in S/N is primarily due to a decrease in the amplitude of internally generated variability with increasing trend length. Because of the pronounced effect of interannual noise on decadal trends, a multiŌĆÉmodel ensemble of anthropogenicallyŌĆÉforced simulations displays many 10ŌĆÉyear periods with little warming. A single decade of observational TLT data is therefore inadequate for identifying a slowly evolving anthropogenic warming signal. Our results show that temperature records of at least 17 years in length are required for identifying human effects on globalŌĆÉmean tropospheric temperature.

7
Has the Urban Heat Island effect on the US temperature record been underestimated?
20
Have global surface temperatures not shown significant warming since the late 1990s?
22
Does unadjusted NASA climate data show no long-term global warming?
4
Do RSS satellite samples show no warming since September 1996?
48
Does the logarithmic nature of global warming invalidate climate change claims?