Do 643,000 Americans go bankrupt every year due to medical bills?

I've been seeing a specific graphic circulating all over Instagram for the past few days. Here's Kim Kardashian posting it on her story. 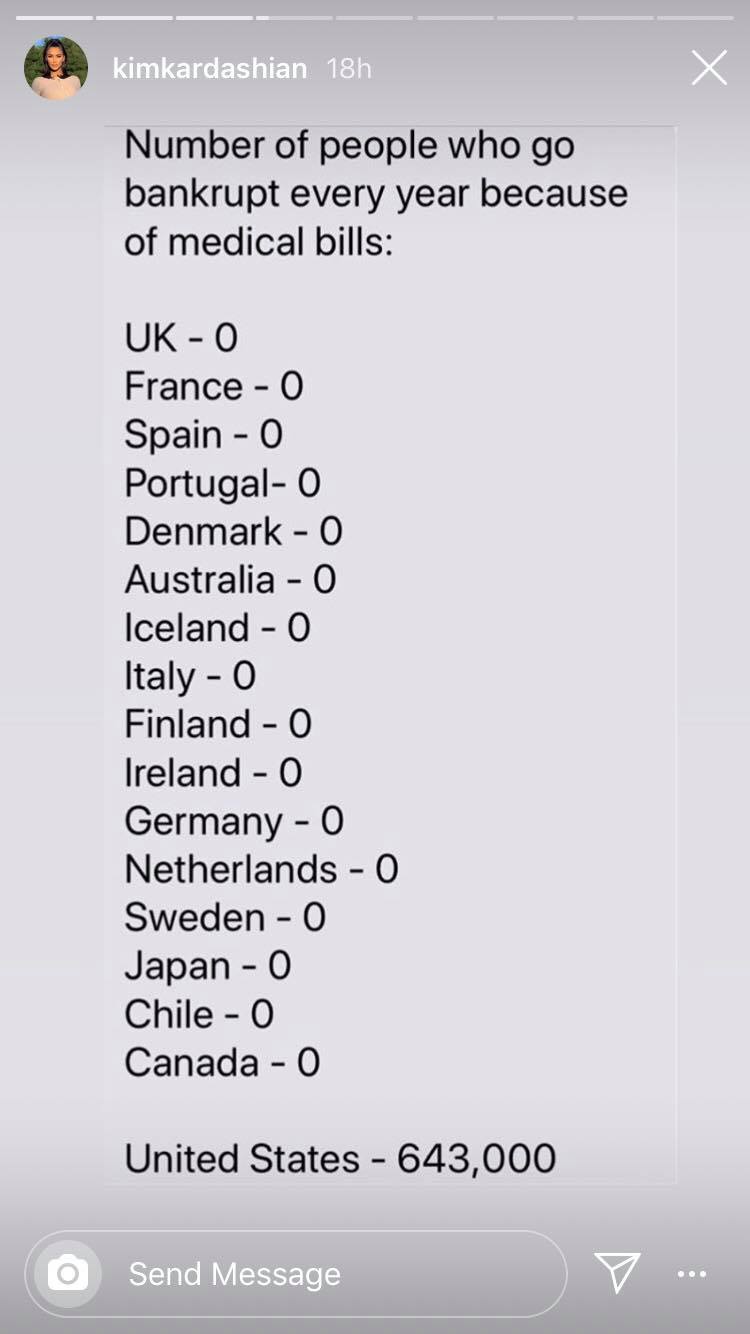 Two things seem odd about this graphic. The first is the 643,000 figure. I know that the American Health Care System is dysfunctional, but that's pretty striking.

Snopes has already tackled this.

Using some very specific analyses, one could make the case that (at least within the last several years) about 643,000 Americans declared bankruptcy annually due to medical bills. But the accuracy of those analyses is open to question, the playing field has changed significantly since they were undertaken (due to the implementation of the ACA), and it’s far from an absolute that the other countries listed in the meme experience zero medical-related bankruptcies.

Also it is not necessarily true that there are zero bankruptcies due to medical costs in the other countries (though the US is definitely the leader). None of the countries cover 100% of all possible medical costs, and some people choose to do medical procedures that are not covered at their own expense.

There's a claim on this site -- which, admittedly, does look kind of dodgy -- that medical expenses are the third leading cause for personal bankruptcy in Canada. I'm still trying to find a better source on this.

6.9 percent had bills over $5,000 (all amounts in Canadian Dollars). Prescription drugs were cited as the costliest medical expense by two-thirds of debtors reporting bills > $5,000, with dental bills cited by 22.2 percent.

On the whole, it seems very likely that there is a greater-than-zero number of Canadians who "go bankrupt" due to, at least in part, medical bills.

0 is totally untrue for Germany.

I first must point out, that Germany doesn't have free health insurance in that sense. It has by law mandatory health insurance, i.e. everybody is forced to be insured. Nobody is allowed to opt out and be uninsured.

While salaried employees pay one half of the insurance cost by themselves (via direct deduction from their paycheck) and the other half is paid by their employer, those unemployed and on social benefits get it completely paid by the state.

That leaves self-employed people (of which there are about 4 million), who must completely pay by their own, but often can't afford this and are indebted. As of late 2018 there was a total debt of 8.21 billion € against the public insurers alone. Especially low paid solo self-employed (parcel couriers, those in the gig economy, etc.) are a problematic group here.

The situation is even worse in that if you actually go bankrupt (the term is "Privatinsolvenz", which is similar to filling for Chapter 7 in the US) you are not off the hook. Your health insurance provider will regularly argue that any debts against him are exempted of being discharged via the bankruptcy process and that those debts are only forgiven after 30 years. So for the affected people, bankruptcy might not even be a solution.

What is the number for Germany then?

It seems like there are no statistics available that split out the number of bankruptcies by reason. Therefor I can only assure you that the number is >0 by pointing out that:

(Sorry, all sources in German.)

The "zero" part is exaggerated for greater effect. It's not accurate, and might even be considered a lie.

A direct comparison is difficult because of the different meanings and requirements to qualify for bankruptcies in different countries. A further complication is provided by loss of income due to medical reasons, which makes it hard to properly classify the cause of a bankruptcy, and practically impossible to do so consistently across national borders.

Regarding the numbers for the US, I initially had multiple sources, but found this one summarizes them quite well:

Researchers disagree on how many medical bills cause bankruptcies. The biggest problem in answering the question is that those filing for bankruptcy aren't required to state the reason. As a result, estimates are based on surveys. The methodology differs from study to study. It depends on how the researchers and the survey respondents define medical debt.

Second, a variety of factors cause bankruptcies. Most people with medical debt have other debt. They may also have low income, little savings, and job losses. That makes it difficult to determine whether the bankruptcy was because of medical debt alone. source

So the 643,000 number is reasonably accurate, but people with strong political bias may be inclined to argue, as demonstrated by a rebutted Washington Post article.

The fact that 0 people in Italy went bankrupt because of healthcare bills could well be true (with caveats - see below).

In Italy healthcare is public and the "healthcare right" (loose translations of Italian "diritto alla salute") is written in one of the first article of the Italian constitution (Italian integral text from the website of the Italian Republic Senate.

Which roughly translates into English like this (translation is mine - don't expect legally accurate translation - IANAL):

The [Italian] Republic protects the health as a fundamental right of an individual and [as a fundamental] interest of the community, and grants gratuitous healthcare to indigent people. No one can be forced to undergo a specific sanitary treatment if not prescribed by the law. In no case the law can violate the limits imposed by the respect of the human person.

Letting people go bankrupt because of medical bills needed not only to preserve their lives, but also to let him live a dignified life, would be against the very fundamental principles of our constitution.

People in Italy do have to contribute partially to their healthcare expenses, but only if their income is sufficiently high.

Anyway, the system is fairly complicated and sometimes convoluted, in order to try to prevent abuse and fraud (which is not uncommon).

Healthcare is one of the biggest expense chapter of Italian national budget.

As for the significance of that "0" figure, that is somewhat fuzzy, because in Italy there is no concept of "bankruptcy" for a private person (it is a concept applicable only to companies). Therefore that 0 figure is not provable because there is no data about people "being bankrupt". There is no formal way for a person to apply for "bankruptcy", hence there is no formal certification that a specific person is "bankrupt", let alone the cause of it.

Of course there are statistics about poor people, but they are sample statistics usually. And then there are the data from the census that is held every 10 years, but there is no way to correlate the poverty of a person with the causes. So the initial comparison is somwehat moot.

On the other hand, if you mean that some people could lose a lot of money if they want non-strictly necessary health care, that surely happens in Italy too, especially if you want to get the services of private doctors. But if you spend so much money that you end up turning poor, then you will be automatically eligible for exemption from further expenses, although those expenses must be "authorized" by your "family doctor", which is mandatory to have and which is a public officer. Therefore he wouldn't "authorize", say, an plastic surgery to cope with bad physical appearance.

I said "authorize" in quote because the system is fairly convoluted (really it is a request for an authorization, that then goes to a public specialist doctor which can authorize the thing... ugh!).

The problem here is that there are regions where the public health care is not up to the standards prescribed by the law (according to the constitution). So, to avoid substandard health care, they are forced to travel to other regions to find the suitable public center that can provide the service.

The national health care system will cover the medical expenses, but usually not any relocation or travel expenses (it will if the life of the patient is at risk, but anyway the expenses for the relatives are not covered).

So, in the end, if you really mean that there are no people in Italy that lose everything because they have to cover "fundamental or critical healthcare" expenses, that's probably true.

There could well be people whose life has become quite miserable because they had to cope with the idiosyncrasies of our public health care system.

Not the answer you're looking for? Browse other questions tagged economics healthcare .

8
Do Americans spend 49 billion dollars a year on pets?
35
Is more than 30% of US healthcare spending waste?
6
Do Americans spend 9.14 billion hours on government paperwork every year?
29
Will 36,000 people die per year due to the repeal of the ACA?
16
Does the fossil fuel industry benefit from trillions of dollars of subsidy from governments every year?
1
Quasi-consensus among economists that neither trade deficits nor surpluses are necessarily 'good' or 'bad' for an economy?