Is it better to cross rough railroad tracks very slowly or at normal/higher speeds? 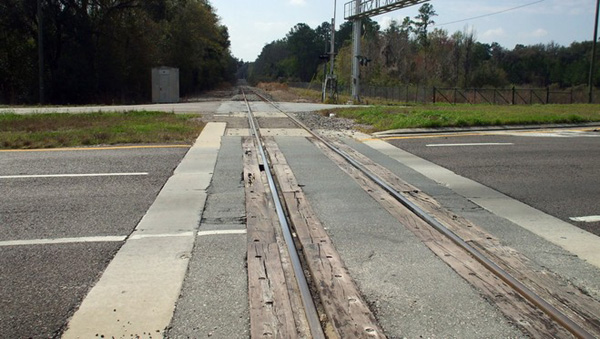 When encountering the average bumpy railroad crosssing such as the one pictured above, does slowing down almost to the point of stopping (as you would for a speed bump) produce less stress on the vehicle than simply continuing over the crossing at a normal rate of speed?

There are a lot of varying opinions on this topic, such as this discussion taken from the Nissan Maxima board (which I picked because it represents sort of an "average" car in the US). I have heard people argue quite passionately for either method.

Has scientific study ever yielded an answer to this question, or even produced a reliable set of guidelines based on demonstrable evidence?

(Also, I'm aware that a truck designed for off-roading or heavy hauling is less likely to be damaged than a low-riding sports car. While that is an important factor to take into consideration when answering, that's not the central question here.)

Well, I found THIS summary of the Mercedes-Benz C-Class test procedure:

...every kilometre completed on one of the state-of-the-art installations [test simulators] is 150 times more intensive than normal driving on the road. The test runs for a total of 2000 kilometres. In terms of the stresses and loads exerted on the car, this is equivalent to a Mercedes customer driving for 300,000 kilometres.

The 2000-kilometre stretch on the test rig lasts four to five weeks and simulates driving on various route profiles at speeds of just 25 and 60 km/h... A total of 26 vertically and horizontally arranged servo cylinders pound the car body mercilessly. A hydraulic system... generat[es]... immense forces of up to 20,000 Newtons, which are applied in quick succession by computer control and shake the car to its core...

Now THIS is a video of the durability test for the Chevy Volt. They record the local roads and then use the hydraulic simulator to recreate those conditions. The interviewee stated that the the "car life" is 100,000 miles and they run "three lives" worth of tests (300k total miles). He didn't mention train tracks, but did mention simulating "block" roads (in the video, the part where the car is driving over that uneven brick material).

HERE are similar videos for VW and Audi tests, though I find the Audi one more believable. If the VW video is actually part of a [probably older] durability test, then I think it can stand up to train tracks.

While these new simulators are pretty impressive, I wondered about taking into account weather aging factors. Audi mentions artificial aging (from the video looks like this includes salt, moisture, and heat/cold cycles). Not sure if the vehicle re-undergoes impact tests after the car has been artificially aged 10-12 years or not.

THIS paper was quite fantastic in terms of a presentation of how, exactly, one simulates road conditions artificially. It also revealed some values used by the industry for roads. For example, it appears that road roughness values are conveyed in meters of accumulated suspension travel per kilometer of driving distance (m/km). The paper states:

Based on personal communication with PACCAR Inc. (2007) and SoMat (2009), many automotive companies design their vehicles for the 80th-95th percentile road roughness.

That's comforting, though I'd suggest perusing that paper, as it quite clearly shows a direct relationship between road roughness values and vehicle damage -- in other words, the bigger the "bump" (or the more of them there are), the higher the probability of damage.

I'm not sure if this really answers the question after all.

It seems that several factors come into play -- age of the vehicle, stress history (how much roughness has already been accumulated), weathering, and size of the particular bump to encountered.

I must call this answer to a close right now, but may edit it later as I think the best answer to this question will involve a discussion of probability of failure, which may assist in making a prediction on individual cases based on input criteria. For now, it seems that auto manufacturers do a fairly rigorous job in pre-testing vehicles to find out where things will wear, and there is a definite scientific interest in simulators and analysis, as I've found in the literature.

In the end, these are mechanical systems, and the will fail -- thus, I think this question is about the likelihood of failure, not necessarily a purely yes or no answer. Based on what I've seen, however, for a new car I don't think you need to worry. But the more bumps one flies over, the higher the fatigue stress that is added to each part, thus increasing the probability of failure down the road compared to having taken it slower. In any case, I still hope that the answer helps.

Edit: Not quite train tracks, but obviously potholes are raising hell:

In other words, damage definitely occurs. Again, these aren't tracks and we don't know how big these potholes are and how the geometry differences affect how the vehicle handles them... but this shows that bumps at least can and do damage vehicles.