Is the Amazon rainforest the "world's lungs"?

The 72 million Google results for "Amazon world lungs" (unquoted) is evidence enough that there's a common perception that the Amazon rainforest is the "world's lungs". God knows I grew up believing that.

At one point I read that this was incorrect, since the forest consumes just as much oxygen as it produces. But then I was told that was just anti-environmental propaganda.

Now with the Amazon fires all over the news, I've started hearing this once again (for example, this Forbes article). So, is the Amazon a (significant) net source of oxygen?

If not, how adequate are the substitutes mentioned in that article (i.e. soy farms and cow pastures)?

(And, if this doesn't extend the scope of the question too much: if (rain)forests aren't net sources of oxygen, what is?)

I'm not sure where have I first stumbled upon this information, but I think it was during my childhood when media was not centered on the rain forests so much. The primary oxygen production on Earth is actually happening in oceans. Here are few articles I found:

This article says that scientists prefer term oxygen turnover. The term production is very misleading. Rain forests actually produce about as much as they consume because of decomposing plants and animals.

Although media nowadays may say the Amazon is the lungs of our planet, I wouldn't justify burning it just because the forest is not an oxygen producer. It is still a part of nature and burning it can narrow the diversity of both plants and animals, which can have consequences on the whole planet.

The Forbes article asserting the Amazon contributes net zero is correct. The link below shows the environmental science to back it up and also adds an important conclusion about our sources of oxygen.

The oxygen levels in the atmosphere are set on million year timescales by the subtle balance of geological, chemical and biological processes. They are not set by the short term (short term equals anything less than hundreds of thousands of years) activities or existence of current biomes.

A final point to make is that the atmosphere is awash with oxygen, at 20.95% or 209,500 ppm (parts per million). Carbon dioxide, by comparison, is around 405 ppm, over 500 times less than oxygen, and rising by around 2-3 ppm per year. Human activity (around 90% of which being fossil fuel combustion) has caused this oxygen concentration to drop by around 0.005% since 1990, a trivial amount. In parallel, the same activities have caused carbon dioxide concentrations to rise by by 37 ppm since 1990, or 10%. This is a much more substantial percentage because there is so little carbon dioxide in the atmosphere to begin with, so human activities that emit or absorb carbon dioxide can make a major difference. This is why we need to worry about the increase of carbon dioxide in the atmosphere (and its resulting impact on climate), and why we don't need to worry about running out of oxygen

Edit: A new article in The Atlantic explains this in much simpler language.

This is what we are burning at Earth’s surface today. We’re not just burning down the Amazon. We’re burning down all the forests in Earth history that we can get our hands on. For every worrying part per million that CO2 goes up from burning fossil fuels, atmospheric oxygen goes down an equivalent amount, and then some. As a result, oxygen is dropping far faster from burning fossil fuels, and their untold forests, than it is from burning just the trees available on the planet’s surface. We’re reversing tens of millions of years of photosynthesis all at once.

tl;dr - yes, but there are doubts that it will keep being "world's lungs" in the future.

The removal of athmospehric CO2 and the production of oxygen are two sides of the same process, while the former is much easier to estimate and measure. And terrestrial ecosystems play an important role in the CO2 absorption, taking up roughly as much CO2 as ocean biomes, despite their smaller area: 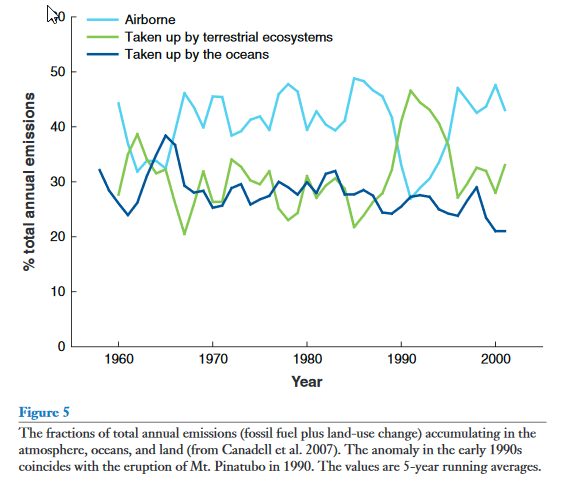 However, it's important to note that rainforests sequester the carbon primarily in the biomass, as opposed to biomes deemed effective carbon storages, such as swamps or mangroves: 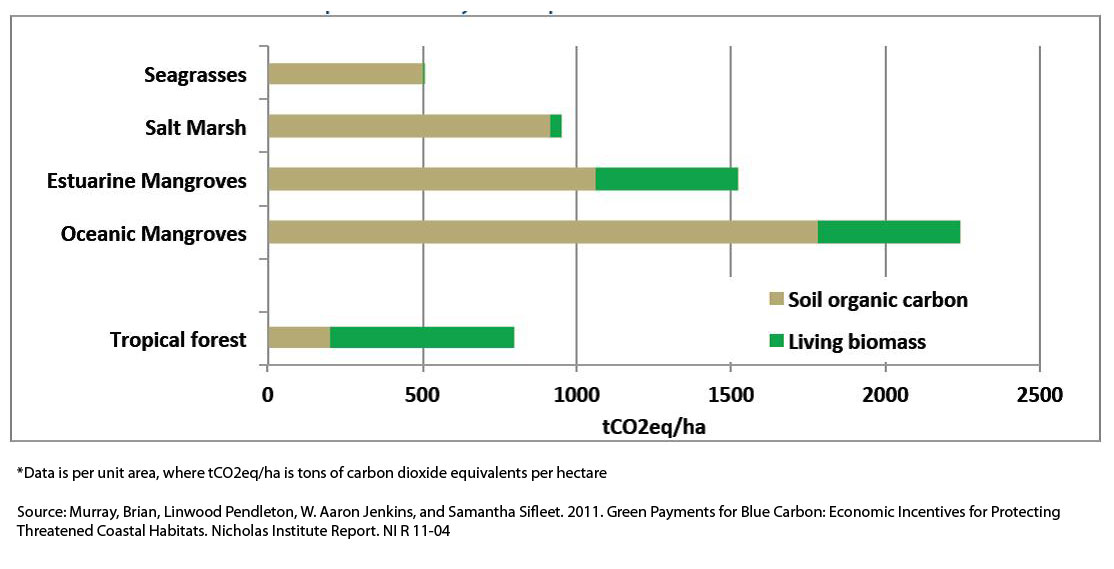 Practically this means that while tropical forests are very effective short-time CO2 absorbers, they relatively quickly reach an equilibrium after which they lose nearly as much CO2 from decay as they gain from photosynthesis.

Not the answer you're looking for? Browse other questions tagged amazon-rainforest .

27
Was the number of forest fires in the Amazon in Summer 2019 considerably higher than usual?
6
Are the 2019 Amazon rainforest fires only 7% higher than the 10 year average?