Can you test for microwave leaks by putting a cell phone inside and calling it?

I heard as long ago as 2003 that trying to call a cell phone while it's inside a microwave (with the microwave off, of course) could be used to test if the shielding of the microwave was intact. I recall trying it and that it worked (the phone did not ring). I've tried in other microwaves and it has sometimes worked.

Is this method reliable?

Why or why not? Currently, explanations mostly occur in forums and none are well-supported.

On a very related note, a similar test involves doing this with a netbook and attempting to communicate with it via wireless connectivity (e.g. to ping it). See here for an example, claiming that this works since the two frequencies are very close. Coincidentally (or not), the comments feature suggestions to use a cell phone instead...

Microwave in the microwave oven is usually at 2.45 gigahertz

Wireless LAN protocols, such as Bluetooth and the IEEE 802.11 specifications, also use microwaves in the 2.4 GHz range

So using Bluetooth / WiFi is a very good test for seeing if the microwave oven has a leak. The ping is a very good test, since what you really want to see is if any microwave comes out, so even if the laptop within the oven, say, can receive the request, the reply (ECHO_REPLY) should not be sent.

Cellphone frequencies vary a lot. Within GSM there are various frequencies and CDMA is different so using cellphones is not a good test for this.

On significance of frequencies / wavelengths for shielding Microwaves in specific and Electromagnetic waves in general:

While the answer from @manojlds was reasonable, I wasn't satisfied. The key question is not whether the seals on a microwave can be tested using Wifi at the same operating frequency (2.4GHz), but whether a cell phone is an accurate way of testing these same seals. In other words, will something that filters out 2.4GHz also filter out 900-1800MHz?

I did my own digging and am still not entirely satisfied, but wanted to report the results. I found a tutorial from Clemson University Vehicular Electronics Laboratory entitled "Practical Electromagnetic shielding", and tried to understand it. The key formula I thought might be helpful was this one:

I emailed the contact for the site, Dr. Todd Hubing, Michelin Chair and Professor of Electrical and Computer Engineering, and got the following response:

I would be a little concerned if I was able to communicate with a cell phone in my microwave oven. Nevertheless, it could happen I suppose. Traps and seals that work well at 2.45 GHz might not work so well at lower frequencies. It is true that apertures below cutoff have a shielding effectiveness that improves as frequencies get lower. However, the absorption loss associated with shielding materials gets worse at lower frequencies. Since microwave ovens operate in a very narrow frequency band, their shielding can also be narrow band.

So... not quite the definitive answer I hoped for, but reasonable.

I also posted in a forum called Microwaves101 under the Measurement and Testing sub-group. In response to my post, I got the following:

The door, specifically the surface around the cavity perimeter that it fits against, is tuned to 2.45 GHz. This surface is a 1/4 wavelength long (3 cm), so it acts as a choke specifically at that frequency. See section d of the below drawing. 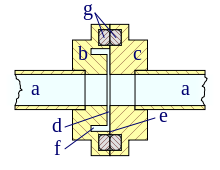 So, there's where I've gotten. The best I can say is the following:

53
Can standing in front of a microwave oven give you cancer?
16
Can you unlock a car using a cell phone?
26
Does home-WiFi expose you to less radiation than using the 3G on your cell-phone?
31
Can you detect a hidden camera in a trial room/changing room with your phone?
18
Can you recharge a phone battery in the microwave?
3
Are the location of brain-tumours linked to which ear you use a cell-phone with?
4
Do Samsung phone batteries contain secret chips and antennae for stealing data?
8
Can mobile phone cell towers be spoofed in ways that allow interception of calls?