Is the internet in Madagascar faster than in UK?

According to this article dated July 30 2019, the island nation of Madagascar has faster internet than the United Kingdom.

If you only know Madagascar because of that animated penguins film, you've not been using the Internet properly. But that is understandable, because the African island nation has faster Internet speeds than you in the UK, France, or Canada.

Question: Is it true that Madagascar has faster internet speeds than the United Kingdom?

active oldest votes
14
Want to improve this post? Add citations from reputable sources by editing the post. Posts with unsourced content may be edited or deleted.

The claim is both misleading, and wrong from an objective point of view.

First, it is misleading because the numbers it refers to are the country's mean download speeds. In the objected countries, such as e.g. France (or even moreso Canada), a large number of people lives in rural, sometimes quite remote areas where, indeed, internet speeds are not always top-notch. Same problem here in Germany, if you live on a mountain top in the Hunsrück, well that's bad luck for gigabit internet access. But much unlike in Madagascar, you do get internet, only just it'll be none better than ADSL2+.
So, obviously, the mean ( = average) will reflect that negatively. Using the median would be a much more accurate and honest measure to begin with.

On the other hand, in Madagascar, if you have internet at all, you a) belong to a small elite and b) live in a large city where there exists a modern infrastructure. So yes, obviously, the famous last mile which is a dominating factor is much "better" for those who actually have internet. But all in all, the claim as such is deceptive, to the point of almost being a lie. Because "no internet" translates to 0Mbit/s.

Second, while a couple of better and more reliable links are planned for during/after 2019-2020, to date Madagascar as such is connected to the internet via exactly two cables, one being LION, the other being an odd route that finally ends in Mombassa in one direction where it has connection to SEACOM, TEAMS, and EASSy (plus some that are planned for 2020+) that finally end in FALCON, and has a connection to SAFE somewhere down south in Cape Town. Long lines that eventually end somewhere, and that hopefully conect to a high-bandwidth network, if nobody has pulled the cable.
There is thus the very unreliable route around the entire West African coast to connect to the Western World, and the route via the Arab world to connect with Asia, which is equally long and unreliable. Bandwidth is comparatively poor, but since there are so few users, currently nobody notices. In summary, internet connection in Madagascar is poor.

I don't have the possibility of accurately measuring that now, but I wouldn't be surprised if you had "typical" everyday RTTs of 200-300ms to most "mainstream" services and locations. If I try to open e.g. the website of l'Express de Madagascar (a large newspaper) from my "mainstream European" location, the connection times out 50% of the time (ping tells me 190ms, but what's ping worth if you don't get a connection). The other 50% it looks something like: 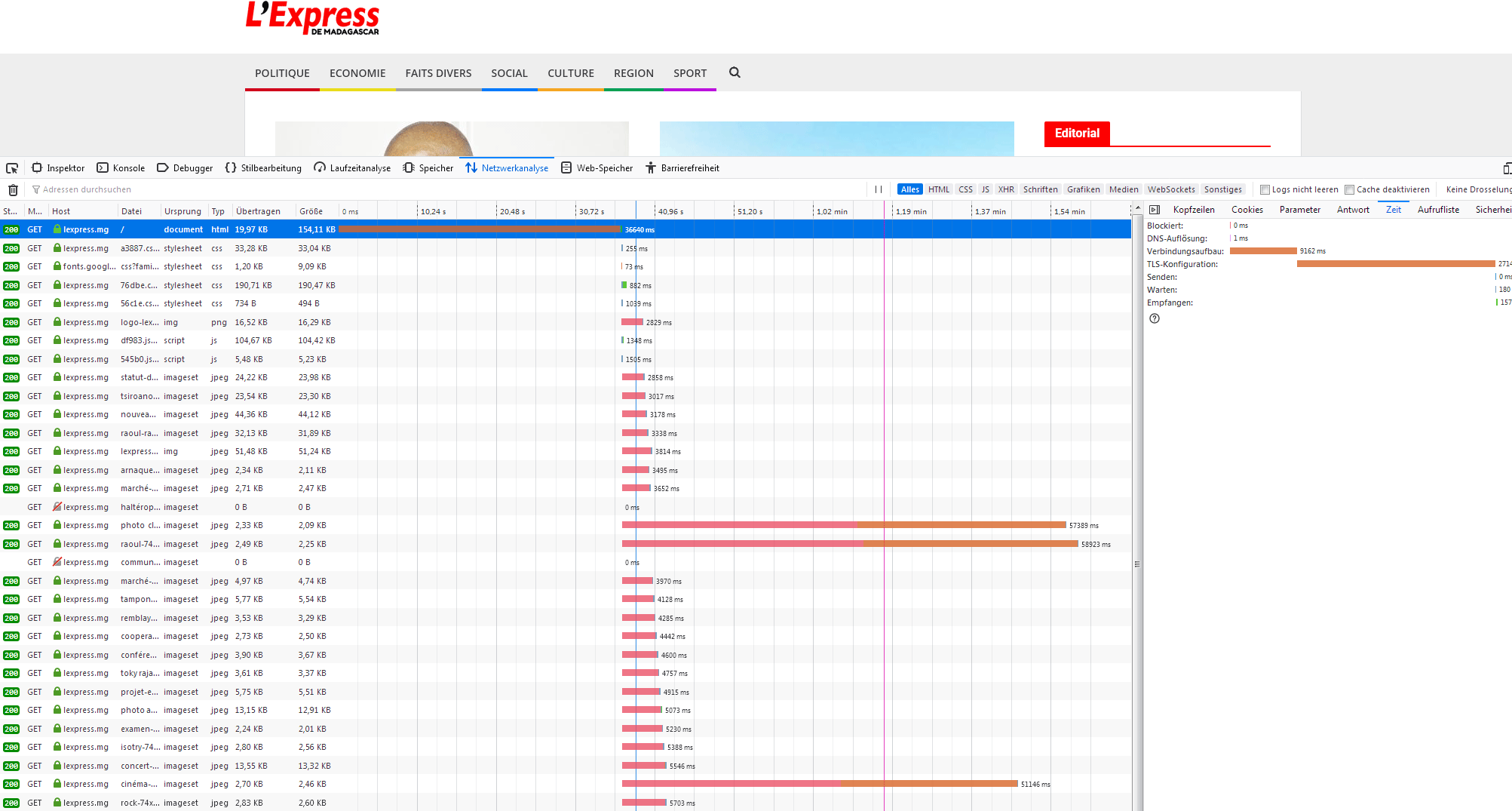 9 seconds for connection establishment, 4-5 seconds to transmit a 12kB image file, that's undisputably not an awesome internet connection. That's figures you had in the early 1990s with a 14.4 modem...

Note that "internet" is not the guy living next door. Internet are those guys (and servers) living 1,200 or 5,000 kilometers away.

France, on the other hand, is directly connected to every significant network within Europe with reliable, high-bandwidth, low-latency lines, and with around 20 more or less line-of-sight undersea cables to US east coast. And, some, uh... well, not so great lines going far east (think FALCON), but the uplinks to these are still two or three orders or magnitude better than the African connection coming from the south, both in bandwidth/latency and reliability. Same for UK. Same for Canada, obviously, which has a very short and direct route to USA.

For European countries like France or UK (and Canada likewise), the speed of light is the biggest challenge (since it affects latency and is somewhat tough to improve on with our current understanding of physics). For Madagascar, getting a connection to something outside Madagascar at all is the challenge.

That might be true in 2017, or at the beginning of the 2018 when UK analytics firm Cable published its speed table. Right now you can check the stats live.

And although Madagascar is still "faster" than UK only 7% of its population have access to the internet (compared to 94.6% in UK) according to this page.

Even in 2017 (August 2017 Wayback Machine data), it still ranks below all of the 3 tested countries.

Only one source put Madagascar above the other countries, that being the Cable.co.uk dataset which was summarised by Fastmetrics. In the summary, you can see that Madagascar only had ~4000 datapoints out of the 163 million speed tests, which is the likely cause of the inflated ranking. The Speedtest.net results also show a similar lack of results, with most months lacking enough data for a ranking.

It's unlikely that the average Malagasy had faster internet speeds than any of the 3 listed countries, considering the statistically insignificant number of results.

Several answers provided data about Madagascar in particular. Here is a more general explanation why it's not surprising.

Poorer countries generally tend to have better internet connection at the moment, mainly due to the more developed countries having started building their infrastructure sooner.

If you place underground cables for your backbones, you want to use them for a while at least until your investments are returned, you won't dig them up and replace them with newer and better ones every year as soon as new technology becomes available. Same with server farms, routers, etc. Even the cheapest hardware you can buy now is likely much faster then the most expensive you could have bought 15 years ago.

This will likely change in the near future when older hardware in the more developed countries will start getting too old, and has to be decommissioned and replaced.

This is answerable only within particular context of what does it mean for country to have an internet speed X, therefore the original presumption and question is not very meaningful, unless you specify what exactly are you measuring.

In general, we could reasonably expect that UK will have availability of faster internet in general (more high speed lines connected to more of the rest of the world), as well as drastically larger internet usage among population than Madagascar. However, this will vary a lot when you compare particular locations within countries themselves.

A rural English setting might have not only slower speed available than a major English town, but also slower internet speed than eg. capital of Madagascar.

Reliance on speedtest and similar sites doesn't seem to be very meaningful either.

For example, I was in Frankfurt am M., Germany not very long ago. I was used to having complete, fast and reliable 4G coverage in my country (Latvia). In Frankfurt I was only able to buy mobile access, which yielded meager EDGE or HSPA in almost any location in the city. And at what seemed exorbitant price to me.

Nevertheless, Germany, along with a number of other European countries seem to be almost twice higher in some speed test rankings than Latvia, despite the fact that in practice internet is very frequently slower and more expensive there, and they are lower in other speed rankings available .

Not the answer you're looking for? Browse other questions tagged internet africa .