Did Michelle Obama have a staff of 23 people, while Melania has a staff of 4?

According to this picture (shared over 100k times) 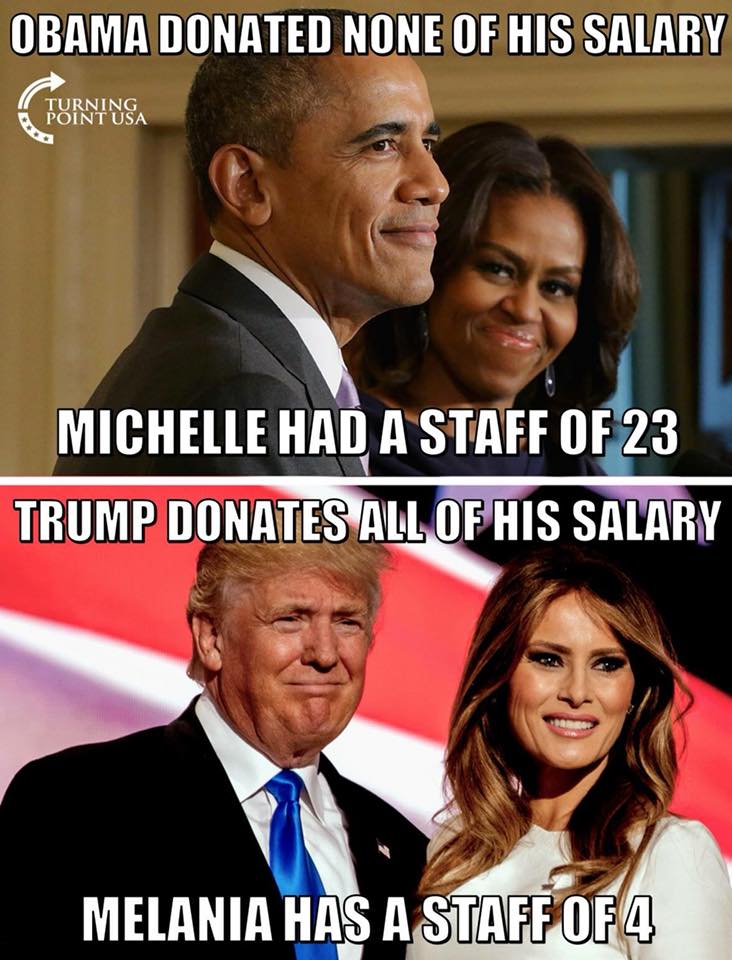 Obama donated none of his salary, Michelle had a staff of 23

Trump donates all of his salary, Melania has a staff of 4

I'm more interested in the claims about comparative staff size.

As for the challenged claim, that is a qualified yes (Michelle's staff was larger than Melania's, but not by that much, and there were reasons for it).

The Hill writes in an article dated October 2017:

Melania Trump has a smaller group of aides compared to her predecessor, Michelle Obama, according to the news outlet's analysis of White House personnel reports.

The article goes on to state that Melania Trump has a staff of four listed on the record, with her communications director Stephanie Grisham stating that there are five more people serving her since the report stating "four" came out in June that year.

This is in contrast to Michelle Obama's staff, which (in Barack Obama's first year in office) had 16 people listed, with "some Obama administration officials" putting the actual number "closer to 24".

So, listed staff would be 4 to 16. The original claim apparently compares "listed" to "unofficial", but I'll let this slide. (And see the Snopes article linked below for a different take on the numbers.)

The Hill adds this (emphasis mine):

Obama took on a busy agenda at the start of her husband's term, pushing initiatives like "Let's Move," her campaign against child obesity.

In comparison, Melania Trump remained in New York during the first few months of the Trump presidency while her son Barron Trump finished the school year.

Snopes also mentions this (emphasis mine):

Things get more complicated when it comes to Melania Trump. For one thing, she didn’t move into the White House until 11 June 2017, five months into her husband’s presidency. For another, she was far less active during her inaugural year as first lady than her immediate predecessors.

With regards to the White House personnel reports that The Hill is also referring to, Snopes continues (emphasis mine):

That report does list exactly four staff members whose titles link them directly to the first lady, but it is neither a full nor a current count, for the following reasons:

First, the report was published on 1 July 2017, only slightly more than two weeks after Melania Trump moved into the East Wing. Her staff was skeletal then, at best.

Her three new hires in January 2018 would have brought that total to 12 staffers — a total still lower than Michelle Obama’s, but triple the mere four claimed of her.

And as it's prominently featuring in the claim, and I don't like to let lies go unchallenged:

Snopes also states that Barack Obama donated all of the USD 1.4 million he received as winner of the 2009 Nobel Peace Prize, putting his donations at ~78% that of what Trump will have donated at the end of his term -- while not being a billionaire to begin with.

This claim dates back to July 2018, and is based on a report from 1 July 2017, less than a month after Melania became the First Lady.

Snopes fact-checked it and explains that it is misleading:

Does Melania Trump have a smaller staff than Michelle Obama? Yes, but the disparity is smaller than alleged.

They explain that, comparing like-to-like, Melania had 12 staffers, not just the four included in the early report. They explain how the discrepancy in the counting occurred.

20
Did Obama have a marine demoted for correcting him?
48
Is Donald Trump's ratio of bankruptcy to businesses consistent with the success rate of other entrepreneurs?
14
Is Michelle Obama a transgender woman?
15
Did Eric Trump say Melania is smarter than Michelle Obama?
12
Did an anti-Trump protest hold up a “Rape Melania” sign?
6
Are white people who believe Obama is Muslim largely Trump sympathisers?
9
Did White House staff have problems booking a hotel for Trump for G20?
6
Did Obama use the Espionage act to put reporters in jail?
10
Did Obama have a policy of “separating [migrant] families”?
41
Did Trump salute 600 times at the West Point commencement exercise before using two hands to drink water?