If you are 29, you’ve been alive when half of all the fossil fuels ever burned throughout all of human history have been burned

The source appears to be an article in PeakProsperity.com. The source makes the claim this way (my emphasis):

Fossil fuel energy is responsible for providing every creature comfort and material abundance in your life and it’s has been growing exponentially for your entire life.

Here’s the brain buster. Squint at that chart carefully and you’ll see that fully half of all the fossil fuels ever burned throughout all of history have been burned since 1990.

The basis appears to be this chart:

The specific numbers seem to come from that chart but it only plots 3 data points and seems to fit them to an exponential. The annual chart doesn't look like this and certainly doesn't look exponential (as some other charts the source includes make clear whiteout any explanation as to why this chart looks different).

So is current growth in fossil fuel use growing exponentially? And have we burned half of all the fossil fuels used over history since 1990?

This chart is taken from https://ourworldindata.org/fossil-fuels ; most data there comes from the published paper: 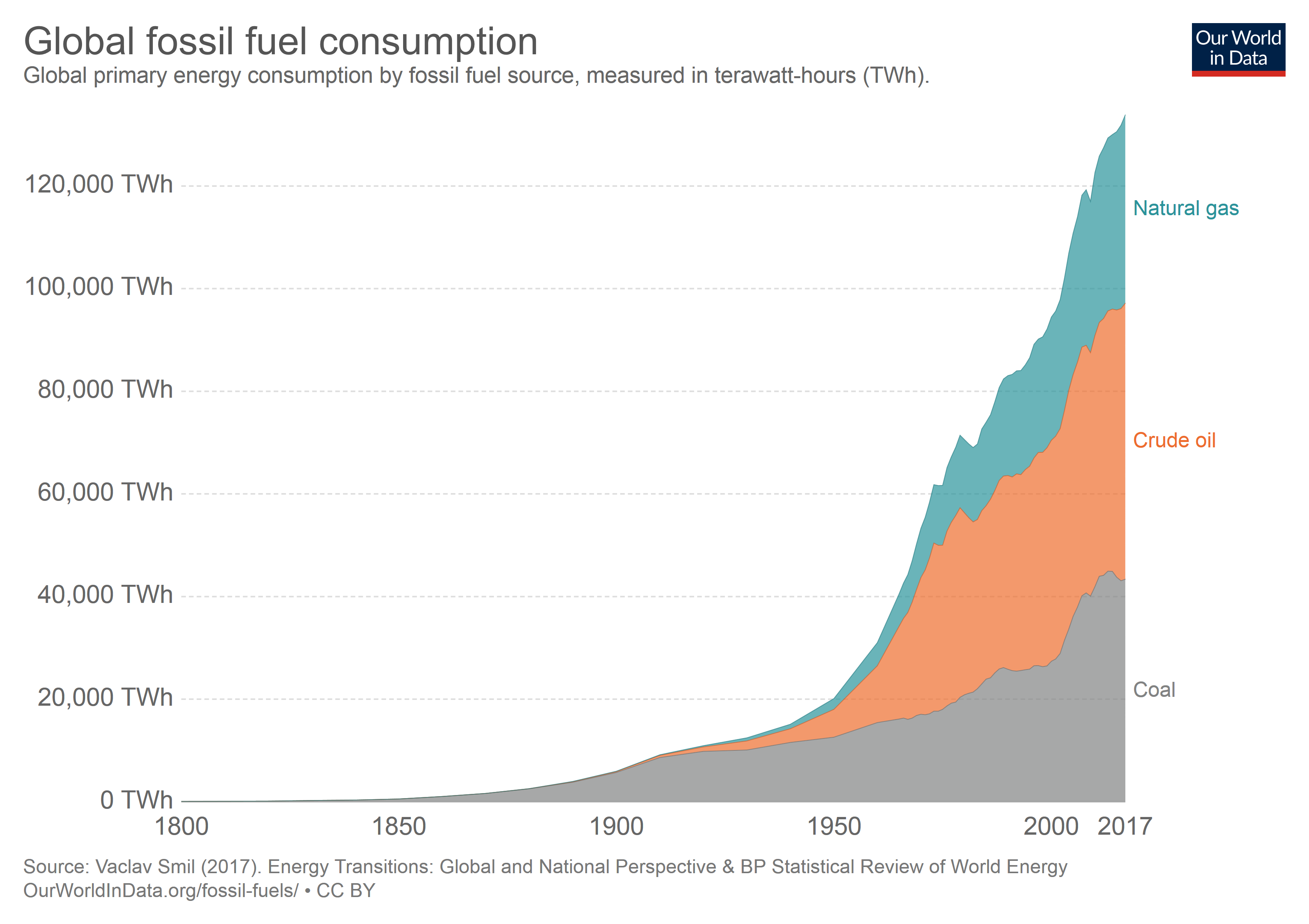 Using data from the same source, the aggregated numbers confirm that 50% of total (1800-2017) consumption of fossil fuel has happened after 1990.

I basically summed the data in the online-available spreadsheet; I don't think that should be dismissed as "personal research" ?

edit: some comments debate whether fossil fuel consumption is the same as fossil fuel use (as per the OP). I cannot find easily whether the data here refers to the total primary energy of the fuel or to the energy produced after transformation - I strongly suspect it is the former, since it is much easier to compute (at any given time, there are several machines using coal, with different efficiency, so it is much easier to mesure the quantity of coal burned that the output). Moreover, the subtitle of the chart explicitely mentions primary energy. In case I am wrong, this chart should only be considered as a proxy for the question asked.

@Evargalo gave an excellent answer proving the numbers, but it's interesting to look at what drives this.

And that might not even be the most shocking way of putting it -- from 1800 to around 1930 the world population doubled once (from 1 to 2 billion). From 1930 to today it doubled twice.

But that's just half the equation, the other half is that economic growth (on a per capita basis) is strongly correlated to energy usage and meat consumption. Both of which, until very recently, required the burning a lot of fossil fuels. Additionally, consider that around 100-150 thousand people are lifted out of extreme poverty every day.

Let's tie that all together. Population has exploded exponentially since the start of the industrial revolution. Next, extreme poverty is being eradicated across the globe, especially since the late 80's. Finally, when people leave extreme poverty, their consumption, particularly of meat, increases dramatically (an excellent case study for this is China over the last 3-4 decades). And improvements in standards of living are directly tied to energy consumption, which until extremely recently was almost entirely generated by burning fossil fuels.

In light of that, the 1990 statistic isn't very surprising at all! It directly follows from population growth and the worldwide average of living standards.

Not the answer you're looking for? Browse other questions tagged economics fossil-fuel .

53
Does UNICEF use less than 14% of the donated money for the advertised causes?
13
Are fossil fuels making the world greener?
10
Does pumping gas when the tank is half full and on the low flow setting provide an economic benefit?
67
Has the Red Cross raised half a billion dollars for Haiti to build 6 houses?
9
Does nearly half the world's population live on less than $2 a day?
16
Does the fossil fuel industry benefit from trillions of dollars of subsidy from governments every year?
8
Is the median income for African Americans at an all time high?
37
At the current rate are we going run out of fossil fuels by 2060?