Can dogs love their owners?

A common assumption about household pets is that there is a mutual endearment between owner and pet. Searching the internet finds handfuls of people asking the same question and there are plenty of editorial comments on whether our fluffy friends love us back.

To approach this from a skeptical standpoint, what emotional details do we know about animals? Have studies been done on emotional attachments of dogs to people?

"Love" is a difficult term to pin down even with regards to human interaction but, for the sake of this question, here is a definition I pulled from the dictionary:

To phrase this as applicable to dogs: Can dogs possess feelings of deep affection for their owners? Aside from purely behavioral traits, is there any evidence one way or the other?

After some research, I was elated to find out that studies have been conducted, about dogs in general and specifically about their affection towards owners. As a disclaimer, I don't claim my answer proves dogs can love their owners - but existing evidence seems to suggest they do.

In order to determine whether dogs can posses deep affection towards their owners, we need to establish whether dogs have such feelings. From this study:

The results suggest that playful, social, exploratory, avoidant and aggressive behaviour in dogs is influenced by stable dispositions; i.e. personality traits, that seem to have been important during the evolution of the domestic dog.

It's behind a pay wall, so unfortunately we cannot scrutinize the methodology, but this study concludes that dogs do have what could be classified as personality traits. If we accept this, then we can safely assume a dog's behavior - more specifically, behaviour identified with affection - can very well be influenced by factors outside the physiological realm.

Then we have this study - it's research subjects are specifically dogs living at rescue centers, so whether it's conclusions can be applied to dogs in general is debatable. However, citing from the abstract:

The specific response of the handled dogs toward the handler fulfilled the operational criteria of attachment. In shelter conditions, the remarkable demand for social contact with humans may result in rather fast forming of attachment even in adult dogs.

In conclusion, existing research seems to corroborate the common sense claims that dogs do develop affection towards their owners. As for how much affection, I doubt research is available. However, anecdotal reports abound, such as the very touching case of Cpl. Liam Tasker and his dog, Theo: 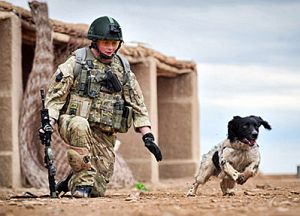 The dog died shortly after it's owner was killed in a firefight, for no apparent reason other than the death of it's caring owner.

Not the answer you're looking for? Browse other questions tagged psychology neurology zoology emotions .

43
Is chocolate bad for dogs?
24
Can dogs smell fear?
25
Will cats eat their deceased owner, but dogs will starve to death instead?
48
Do mice love cheese?
2
Can those limited to the left side of their brains only describe the left half of one's face?
27
Did rescue St. Bernard dogs carry barrels of brandy around their necks?
22
Do monkeys love bananas?
16
Does a dog's brain secrete the same substances when it sees its owner as humans do when in love?
16
Can dogs detect human cancer?