Is this photo showing a woman standing in the nude before teenagers real?

There's a photo going around Twitter and the right-wing blogosphere of a woman standing in the nude at an art exhibition attended by a bunch of teenagers.

I do not want to embed this photo, as it includes nudity..

Here is where I saw it:

Where is this photo from, and is it real or photoshopped?

The photo is real: unstaged and not 'doctored'. But all the surrounding text from the originating claim is misleading.

The photo depicts the artist Mare Tralla. And some visitors to an art exhibition called Naine & Naine at the Pärnu Summer festival.

It is important to note that she was scheduled to open the exhibition. An exhibition that also showed works by artist Marko Mäetamm whose works are seen in the pictures.

These are his works on the wall and Tralla believes these to be sexist. That's why she undressed unexpectedly and began to hang sheets over Mäetamm's paintings with slogan's meant to criticise and expose these sexism depicted on them. As Tralla was only expected to deliver a speech, and not that much more, it was indeed 'a scandal' in Estonia as well. (Scandal in the Art Hall: Mare Tralla considers the work of a male colleague sexist)

Opening the exhibition "Woman and Woman" in Pärnu on Saturday, Mare Tralla caused a scandal with her naked performance: the artist covered the work of Marko Mäetamm, who performed at the exhibition with anti-sex slogans.

However, this is not the only exhibition that explores the boundaries of Pärnu. It could even be said that the summer capital will become the act capital of Estonia. After the 26th nude exhibition "Man, Woman, Freedom" opened in Pärnu City Gallery last Saturday, a man and a man depicting the human body was unveiled, and a bold "Woman and Woman" was set up in the artist house of the city. Tralla's "performance of protest" is now part of the exhibition.

Exhibition “Man, Woman, Freedom” at the Museum of New Art in Pärnu offers a good selection of works by different authors. There are paintings, photos, sculptures, silk paintings, woodcuts and video art outside. In addition, the works of two authors, Kaupo Kikkas' biblically-influenced landscape of human figures and rare photographs of Ernest Hemingway by US painter Waldo Peirce, have been set up in separate halls.
–– Indrek Tark, Eesti Päevaleht, 1 Juuli 2019

The so accused artist says to this:

"I have white skin, I'm a hetero, a team artist too. But in my opinion, my work speaks to women's supremacy," published artist Marko Mäetamm, whose works were criticized by a female artist participating in the grand exhibition Pärnu Art Summer.
–– Anu Jürisson: "Marko Mäetamm: I stand for my work until I die" – The work of the male artist came under criticism from the female artist, Pärnu Postimees, June 30, 2019.

That means that the headline from CitizenFreePress ("Insane Photo — What the hell are they teaching our kids!") is a incorrect. These are not "our kids" but Estonian visitors to an art exhibition. And this is not about officially "teaching" anything off of the curriculum in school, but an unexpected presence of protest at an art gallery.

School kids recently went on a trip to a feminist "art exhibit" and this is what they saw. This is child abuse. This is insanity. This is the lunacy of left wing social engineering in action.

The kids and adults in the picture went to an art exhibition where a male artist displayed his sexually explicit works said to be sexist and abusive of women. A woman protested against this by disrobing. It is difficult to see how this can be accurately described as "the lunacy of left wing social engineering in action".

A better write-up can – at least partially – be found in other English-speaking media, in this case even another right-wing extremists:

As one circular reports on this picture:

The video in the above link is indeed useful to grasp the atmosphere of the 'performance'.

Regarding 'teaching' and school, it is also relevant that the event took place at the opening of the exhibition. That was a Saturday. 29 June 2019 is also interesting as 12. June 2019 to 31. August 2019 are school summer holidays in Estonia. It may be a bit hasty to infer from that that 'teaching', 'school' and 'this picture' do not have that many connections to a 'school forcing kids', but I'll just go ahead and do that: No school forced any of their teenager students to participate on a Saturday evening during the holidays to go there.

Most people in the picture are adults. For example, the female cap-wearer in front of six female breasts and three vaginas isn't a teenager but art historian Marian Kivila. While she is the curator of this exhibition, she seems to react in her personal way to individual exhibits. 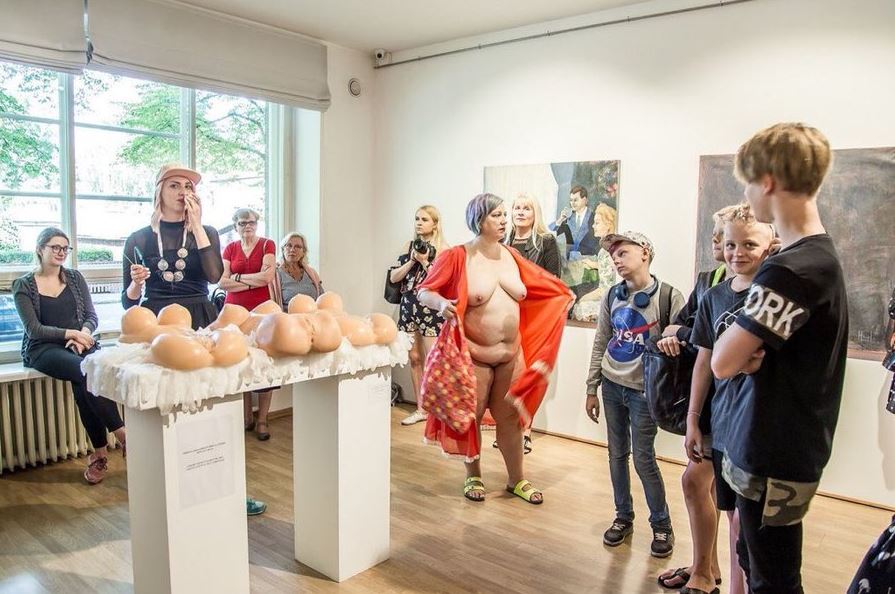 The Pärnu Summer Art festival site describes the intent of the 'exhibition' as:

On June 29, two exhibitions - “Man and Man” and “Woman and Woman” will be opened in Pärnu City Gallery's two exhibition halls. Although the names of the exhibitions may refer to another traditional Pärnu big man and woman's summer exhibition in Pärnu, the exhibitions are not an extension, criticism or parody of the UKM project. Rather, the exhibitions could be seen as an attempt to engage in dialogue with the Pärnu traditions, as well as to dissolve the tradition as a very multi-layered cultural phenomenon and its nature in the sense of body and gender art.

For anyone non-Estonian reading along and wondering about cultural differences in attitude towards really "teaching about sexuality": in Estonia's schools sexuality-related education starts in grade 5 and the UNESCO judges Estonia's approach to STDs, pregnancies, etc. as very effective.

This is a real photograph of a respected artist in Estonia presenting a creative work to an audience of various ages. The composition of the audience appears to be unremarkable to those present in the photo.

The image is real in that it does not appear to be substantively altered. There are no apparent artifacts of a digital recomposition from multiple independently captured or synthesized images, and more compelling there exists a real event from which this image seems likely to have originated.

This image appears to be a photograph of the artist Mare Tralla in an exhibit at Pärnu City Gallery Artists House.

So to the question "Is this photo showing a woman posing in the nude before teenagers real?", the answer is almost definitely yes.

However, by questioning the veracity of an otherwise unremarkable photo the question suggests that it is uncommon or unreasonable for a woman to be nude in the presence of teenagers, but this cannot be assumed given the photo alone as evidence. Very little if anything can be inferred from the observation that the photo is "real." Certainly nothing along the lines that the linked article claims.

Nudity is reasonable, meaning acceptable to society, in many contexts including and especially art in the United States and other countries. This photo is from Estonia so must be judged in the context of contemporary Estonian culture and whatever specific context surrounded the photo at the time. The evidence on the face of it is that no one in the photo appears to be alarmed at either the nudity or the age of anyone present. Lacking any indication otherwise we must, therefore, conclude that this is acceptable and reasonable in the context to those present, and so is of no particular note. In other words the question draws attention to elements of the image that are immaterial to determining its authenticity.

Mare Tralla appears to be a well-respected artist with a Bachelors of Arts from the Estonian Academy of Arts (1995), and a Masters from the University of Westminster, London (1997). She has curated exhibitions, chaired symposiums, edited books and made many other significant contributions to art and culture. There is even a Wikipedia article about her (in Estonian). She is 52.

The photo is from an Estonian exhibition. The exhibit runs "29.06 – 3.08.2019" or June 29th 2019 through August 3rd 2019. Evidence that this is the correct exhibit is that some of the visitors on the citizenfreepress web site image (such as the woman in the pink hat) are also in the exhibit photographs on the linnagalerii web site. I don't believe it is Photoshopped.

Not the answer you're looking for? Browse other questions tagged photography art .

34
Does this photo of the Brown Lady of Raynham Hall show a ghost?
19
Is the climber's head-lamp backstory for this long-exposure photo feasible?
31
Is this "Remove child before washing" clothes label real?
9
Is this a genuine photo of the supermoon over Gdańsk?
74
Is this a real photo of North Korean kids?
9
Is The Venice Syndrome documentary cover photo real?
7
Does this photo depict a human flesh market during the Russian famine?