Did Don Young threaten John Boehner with a 10 inch blade to the throat?

In American Carnage, Tim Alberta's new book, he claims that Don Young (the Republican Congressman from Alaska) threatened John Boehner (then Speaker of the House) with a ten inch blade to the throat over proposed budget earmarks. Boehner later served as Young's Best Man in his wedding. Can anyone corroborate the blade to the throat threat? 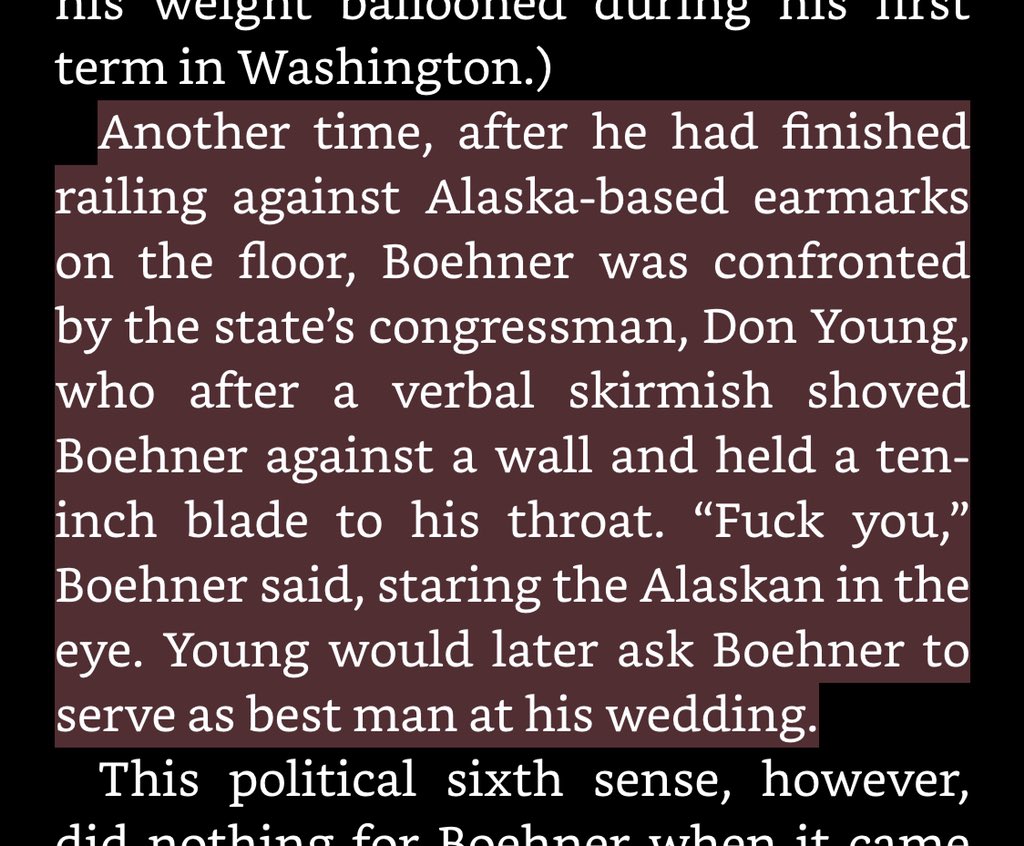 Both men say that Young held a knife at Boehner's throat, but Young says it was covered.

For starters, Tim Alberta wrote the same thing in an article for Politico in 2017, citing Boehner:

[Boehner's] heckling once provoked Don Young, an Alaskan himself, to pin Boehner against a wall inside the House chamber and hold a 10-inch knife to his throat. Boehner says he stared Young in the eyes and said, “Fuck you.” (Young says this account is “mostly true,” but notes that the two became good friends, with Boehner later serving as his best man.)

The main difference between this passage and the excerpt from the book is that it also says that Young corroborated the account. Indeed, according to the Washington Examiner, Young verified the claim in 2018 on the radio show Plaidcast - with one detail different:

Former House Speaker John Boehner made headlines last fall for revealing Rep. Don Young, R-Alaska, once put a knife to his throat during a debate over earmarks. Young confirmed the account at the time, but wants one thing clarified.

"The blade was not open, so it wasn't a direct threat," he said this week, speaking on an episode of Rep. Sean Duffy's, R-Wis., lumberjack-themed talkshow "Plaidcast," an early copy of which was obtained by the Washington Examiner.

Asked by Duffy to verify the story, Young reached into his pocket, retrieved a knife, and re-enacted the incident, using the bemused Wisconsin Republican as a stand-in for Boehner. "He crossed me, and I had a knife, it was like this," Young explained, holding the closed blade to Duffy's neck, "it was ten inches long, and I went up to him, and I said, 'Don't you ever do that again.'"

I listened to the rest of that episode; in addition to the section the Examiner quotes (starting at 10:28), Young characterizes Boehner's account in general as "partially true" - because of the missing detail that the blade was supposedly covered (on Facebook, Young describes it as "mostly a true story").

On the radio show, Young did not provide details regarding the incident's date, and I haven't been able to find a video or official written transcripts from the House documenting it, but as Young very often carries a knife with him (see again the radio show), it could have happened at many points in time.

2
Did Elijah Muhammad admit having extramarital affairs with young Nation of Islam secretaries?
39
Did Benjamin Franklin warn the young American Nation against the Jews?
12
Did a Paul Ryan affiliated SuperPAC campaign to elect Democrat Conor Lamb?
35
Did John Bolton hold a notepad with the text "5000 troops to Colombia" written on it when he announced new sanctions against Venezuela?
66
Did Ohio pass a law granting students the right to give scientifically wrong answers consistent with their religious beliefs?
1
Did the Sanders campaign attack Biden with a "doctored video"?