Was the 45.9°C temperature in France in June 2019 the highest ever recorded in France?

It was widely reported that on 28th June, 2019, a record temperature of 45.9°C was recorded in Gallargues-le-Montueux, France, breaking the previous 2003 record of 44.1°C. Sources: Metéo France, BBC, CNN.

It was then alleged that this was, in fact, not the highest-ever temperature recorded in France, and that in August 1930, a temperature of 122 Fahrenheit (50°C) was logged in the Loire region. E.g. Watts Up With That, @drwaheeduddin.

The reasoning behind these challenges was several Australian and New Zealand papers reporting this temperature on 29th and 30th August 1930. For example, the Sydney Evening News (Trove Source): 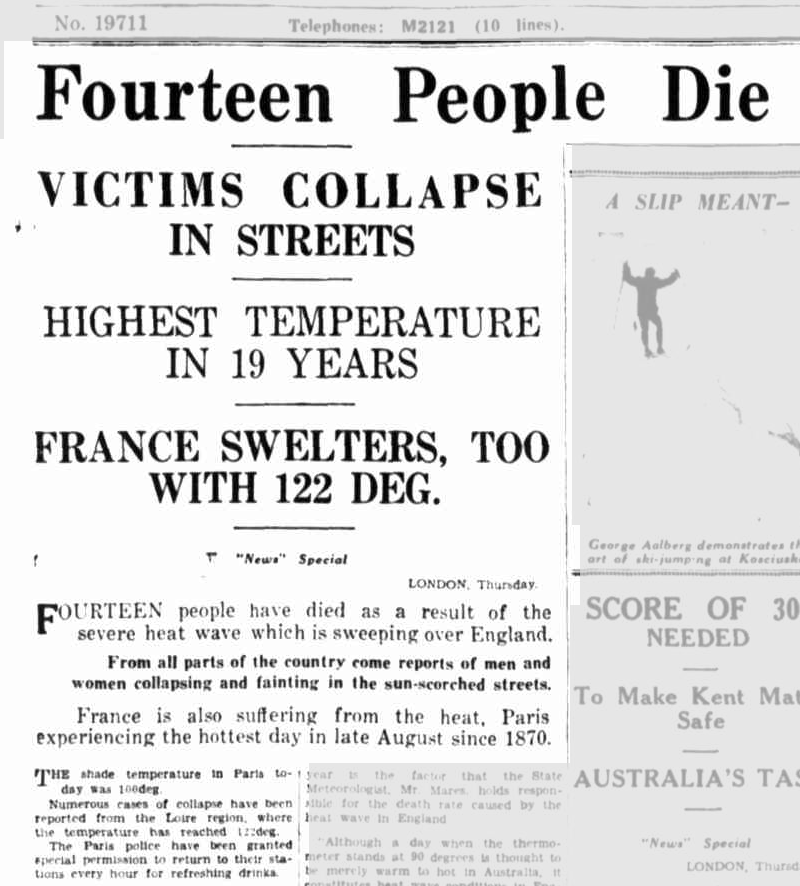 The Queensland Telegraph, The Western Argus and the (NZ) Horowhenua Chronicle and others reported identical figures: Trove Search Results.

Furthermore, many of these claimed this was the highest since 1870, implying yet-greater historical highs.

Was a temperature of 122F really recorded in 1930 in France, and if so, are the measurements directly comparable?

The 1930 measurement was taken incorrectly.

The claim was also made in domestic newspapers at the time, including L'Express du Midi:

A rough translation of this is

50° IN THE SUN IN SAINT-ETIENNE

Note the key phrase "in the sun". (The paper you mention explicitly states that the Paris temperature recording was made in the shade, as opposed to direct sunlight.) None of the newspapers give additional information about the measurement (e.g. how long the thermometer was exposed for, was it near other heat sources, etc.). Without knowing whether the reading was contaminated, it seems unfair to claim that the measurement then should get the record. Indeed, if the measurement was taken in the Sun, that should make the measured temperature hotter than the actual air temperature, contaminating the dataset. It's recommended to place a thermometer in the shade for accurate temperature measurements - and the Saint-Etienne reading did not, apparently, come from that.

It's also worth noting that none of the temperature record I've found for Saint-Etienne from 1930 shows this data point; indeed, it seems that the temperature didn't deviate from the average significantly. While June seems to have been one of the hottest months on average that year, there's no enormous outlier shown - possibly because the measurement was likely performed incorrectly.

Not the answer you're looking for? Browse other questions tagged history climate-change france meteorology .

47
Has France ever won a war?
48
Was the Titanic ever publicised as "Unsinkable"?
7
Has the Urban Heat Island effect on the US temperature record been underestimated?
11
Was Greenpeace ever sponsored by KGB?
69
Was it ever illegal to name a pig "Napoleon" in France?
27
Was the number of forest fires in the Amazon in Summer 2019 considerably higher than usual?
44
Was there a trial by combat between a man and a dog in medieval France?
6
Does the USA have the highest cumulative CO2 emissions since 1750?