In Alabama, if a person is found not guilty of rape, is their accuser assumed to be lying? 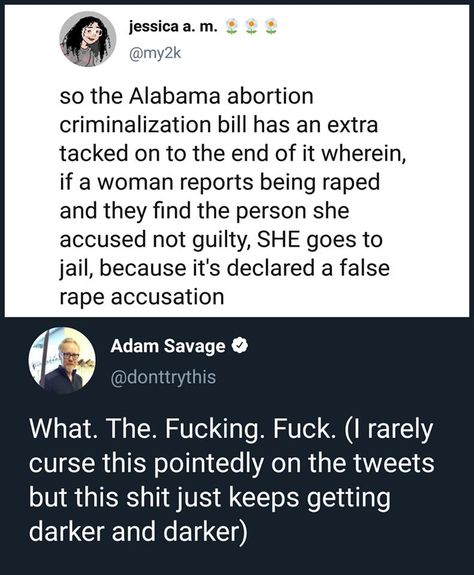 jessica a. m. @my2k
so the Alabama abortion criminalization bill has an extra tacked onto the end of it wherein, if a woman reports being raped and they find the person she accused not guilty, SHE goes to jail, because it's declared a false rape accusation

Adam Savage @donttrythis
What. The. Fucking. Fuck. (I rarely curse this pointedly on the tweets but this shit just keeps getting darker and darker)

Is there actually such a law in Alabama, either as part of the abortion bill or separately? It's a notable claim, in that it's received comment from Adam Savage, a celebrity, but it seems unlikely, as surely there would have to be a separate court case to actually send someone to prison.

The more I read this claim, the more and more messier I realize it is. The Tweet claims several things:

Only the first of these has any basis in fact; the others do not.

I assume that "abortion bill" refers to HB 314, passed this past spring. HB 314 does not even mention rape in the context of abortion (e.g. a rape victim seeking an abortion), let alone in this completely unrelated scenario. The terms "rape", "sexual assault", or related phrases make no appearance in the bill. The Associated Press wrote an article explaining this, if you don't want to scan through the legislation yourself.

(a) A person commits the crime of making a false sexual allegation if:

(b) A person making a false sexual allegation may be liable to the person accused for all costs associated with his or her legal defense.

(c) Making a false sexual allegation pursuant to subdivision (1) of subsection (a) is a Class C felony.

(d) Making a false sexual allegation pursuant to subdivision (2) of subsection (a) is a Class A misdemeanor.

The above section requires the accusation to be made "with malicious intent"; that is, the accuser must be deliberately lying. Someone who genuinely believes that another person sexually assaulted them would not be found guilty under HB 544, regardless of whether the accused was found guilty or not guilty.

It's also worth noting that the Tweet implies that if the accused is found not guilty, the accuser would be automatically sent to jail, and that HB 544 makes no such provision. There's a gray area for some cases, where the accuse could not be proven guilty of rape beyond reasonable doubt, and where the accused could not be proven guilty of making a false accusation beyond reasonable doubt. Indeed, condemning the accuser based on a not guilty verdict in a rape trial would violate the principle of innocent until proven guilty (a human right), and the accuser would not enjoy the right to a trial if sent directly to jail based solely on the ruling of whether or not rape was committed (violating the Sixth Amendment).

That said, it's already a Class A misdemeanor in Alabama to make an intentionally false police report; see Alabama's Title 13. Presumably, going to the police and filing a formal accusation of sexual assault would be covered by this existing law. HB 544 would turn some allegations from Class A misdemeanors to Class C felonies.

Not the answer you're looking for? Browse other questions tagged united-states law sexual-abuse abortion alabama .

51
There isn't "a single case - not one - in which it is clear that a person was executed for a crime he did not commit.”
17
Were fathers arrested while trying to rescue their daughters from rape in Britain at least on two occasions?
16
Until 2016, did Germany require rape victims to physically resist their attackers?