Has the consumption of electricity, steel, copper, gold, water, paper, etc… decreased or flatlined in the U.S. since around 2009?

The following claims are made in this Wired magazine article titled, “How the iPhone Helped Save the Planet” from June 29, 2019; bold emphasis is mine:

“Total electricity use in the US, for example, has been essentially flat for almost a decade. For decades prior to the Great Recession, plastics consumption in the US grew more than 50 percent faster than the overall economy did, but since 2009 the situation has reversed, with plastic use growing almost 15 percent slower than the economy as a whole.”

The article goes on to make a similar claim about overall consumption of other resources by the U.S. economy:

“Year after year, the US is generally using less total steel, copper, gold, fertilizer, water, cropland, timber, paper, and other physical building blocks of an economy.”

These claims are stunning, yet the article cites no references or provides any real substance to these claims.

So are these claims valid? Or merely “truthy” and hyperbolic.

TL;DR: The (complicated) claim for plastic is nearly true. The claim for steel and timber is false -- consumption of both of these commodities is climbing. For everything else, the claim is true -- consumption is flat or decreasing for electricity, copper, gold, fertilizer, water, cropland, and paper.

For plastic, the claim is:

For decades prior to the Great Recession, plastics consumption in the US grew more than 50 percent faster than the overall economy did, but since 2009 the situation has reversed, with plastic use growing almost 15 percent slower than the economy as a whole.

The claim is very specific, but the data sources aren't provided (or even explained). What is meant by "plastics consumption"? What about "the overall economy"? There are several ways to look at each of these.

But, at the very least we should expect the trend in plastic production to change with respect to GDP.

The definitive source for plastics data in the U.S. seems to be The Resin Review. It's referenced by the EPA and several papers on plastic production trends, but unfortunately it's behind a paywall.

User @derobert suggested another source in the comments: FRED, the Federal Reserve Economic Database. Here's industrial plastic and rubber production in the U.S. vs GDP:

Here we can see that the claim is almost true. For nearly two decades (1983 to 2000), plastics production did outpace GDP growth. But in the decade before the recession it was slower than GDP, and since the recession it roughly matches GDP.

False for steel and timber

Steel -- on a post-recession rebound

Timber -- on a post-recession rebound

Lumber is one processing step beyond timber, but the data was more complete than what the USGS had for "logs and wood chips," which would technically be closer to timber.

True for everything else

... except for "other physical building blocks of the economy" (though sales of Legos are declining, which is certainly a bad sign for childhood nostalgia, if not for the economy).

Ibid. In this case, I'm assuming that fertilizer production tracks production of nitrogen fixed as ammonia.

From the USGS Trends in Water Use: 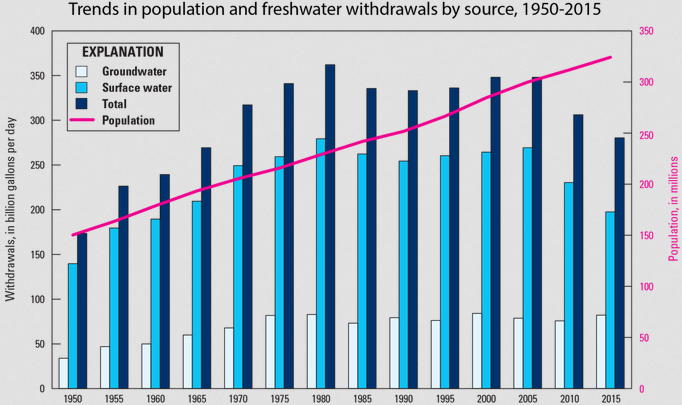 32
Is the total cost of treating the uninsured in emergency rooms more expensive than government-subsidized urgent care would be in the US?
17
Did a senior U.S. Justice Department official state that 3- and 4-year-olds can learn immigration law well enough to represent themselves in court?
8
In the U.S., is more water used for electric generation, and more electricity used for water infrastucture, than anything else?