Does a return economy-class seat between London and San Francisco release 5.28 tonnes of CO2 equivalents?

I took this self-survey of CO2 emissions run by the German Environment Agency.

It computes for example that an economy class seat from London to San Francisco and back – about 22 hours flight – accounts for 5.28 tonnes of CO2 equivalents (CO2eq or CO2e). 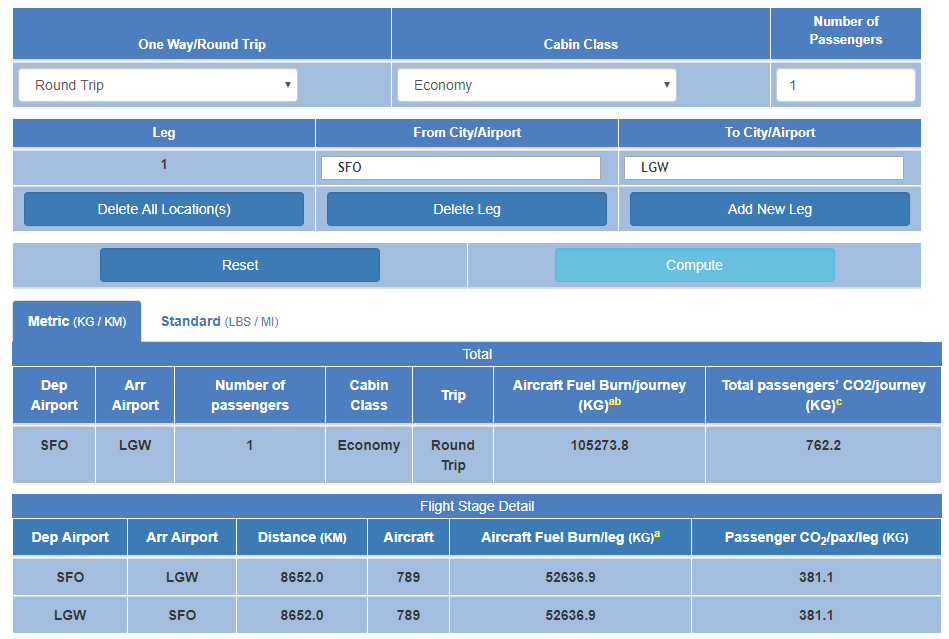 Is the German Environment Agency's estimate for CO2eq from such a return flight reasonable?

Water vapor is indeed the most important greenhouse effect contributor.(Ref. 1)

It is usually not showing up in climate change discussions because mankind basically has no way of directly affecting the amount of water vapor in the air, either positively or negatively, as anything we could or could not do is utterly dwarfed by natural processes. (As opposed to CO2.)(Ref. 2)

There is one major difference, though. Airplanes. They put significant amounts of CO2, and more importantly, water vapor, directly where it has the most significant impact: High up in the atmosphere. And they are the only source doing that. When US air traffic was grounded for three days following 9/11, the effects were immediately measurable.(Ref. 3)

CarbonIndependent.org Aviation sources elaborates in some detail on how its CO2 calculator does its calculation, arriving at 250 kg CO2e per flight hour (about the same value that the GEA calculator gives you -- 250kg/h * 22h = 5500kg ), then going on to quote Professor David Lee, Director, Centre for Air Transport and the Environment (CATE), Manchester Metropolitan University:

Whilst it is incorrect to multiply CO2 emissions by the RFI, it is clear from the foregoing that aviation's effects are more than that of CO2. Currently, there is not a suitable climate metric to express the relationship between emissions and radiative effects from aviation in the same way that the global warming potential does but this is an active area of research. Nonetheless, it is clear that aviation imposes other effects on climate which are greater than that implied from simply considering its CO2 emissions alone.

The site then goes on to state (emphasis theirs, but especially note the last line):

According to this statement, it is incorrect to multiply CO2 emissions by the RFI, but it is also incorrect to ignore them. For the purposes of a calculator, some decision must be taken until further evidence is available, and the Carbon Independent calculator will for the time being multiply aviation CO2 emissions by a factor of 2.0. The practical consequences are in fact minor as regards informing people on the easiest way to reduce their carbon footprint; whatever the size of the factor used, the easiest way for most people who fly to reduce their carbon footprint will be to cut back on flying.

So, without going into actual number crunching and arguing about the "correct" CO2e calculation (which does not exist), the Environment Agency's calculation seem legit, and does correspond to the broad opinion in climate research.

Warning : very short calculation ahead. I hope it's alright for Skeptics.

One way to check if the results are plausible is to calculate the CO2 emissions in grams per passenger-km.

According to this IPCC report, the direct CO2 emissions for passenger aircrafts are between 95 and 250 gCO2 / (km * passenger) : 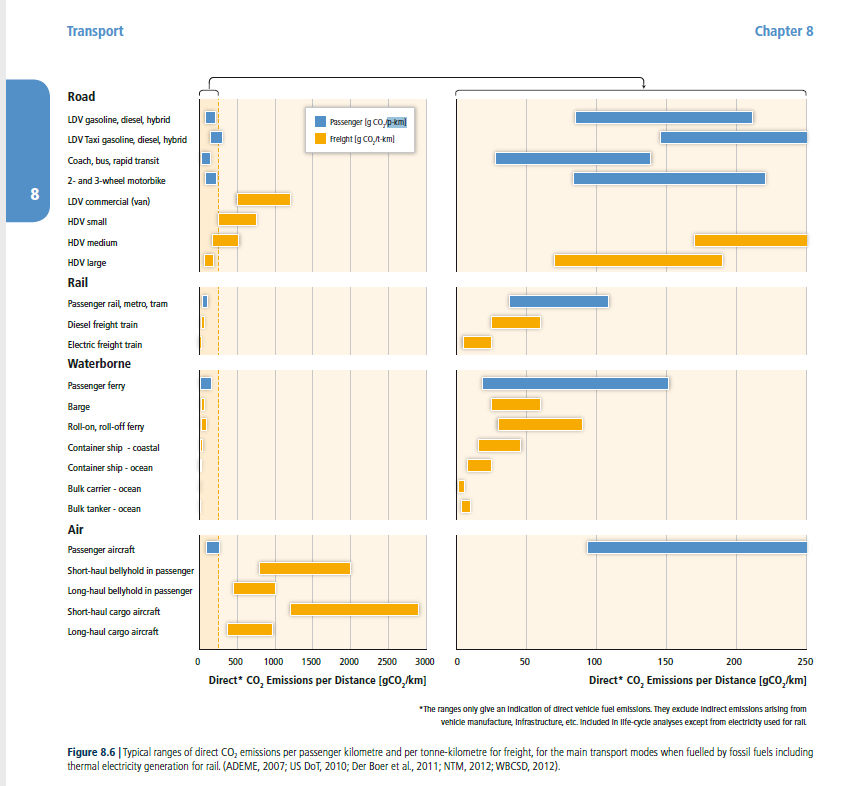 44 gCO2 / (km * passenger ) would correspond to an efficient train or coach, but seems to be well outside the range of any current airplane.

How does the ICAO calculate these values?

Even with those best-case assumptions:

it doesn't seem to be possible to get any value under 60 gCO2 / (km * passenger). Modifying any of the assumptions in order to calculate more realistic values would increase the amount of released CO2.

UPDATE : The methodology is described in this PDF, I'll try to reproduce the results. (Thanks @Nat!)

Note: I'll investigate the values given by German Environment Agency later. Showing that the values from the ICAO are wrong doesn't say anything about those given by the GEA.

Not the answer you're looking for? Browse other questions tagged climate-change aviation .