Is Iran recovering debris of the shot-down Global Hawk in its own coastal waters?

There is currently contradicting information regarding to the location where the USAF RQ-4 Global Hawk was shot down by Iranian forces, with the US claiming it happened over international waters and Iran that it was within their territory. 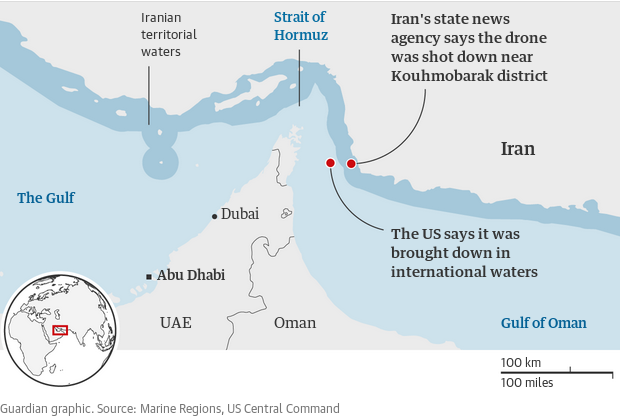 Given the drone's size and cruise altitude, I suspect it will be hard to get confirmation of either account by any independent party. However there is one more part to Iran's account:

It is obvious the US has painted itself into a corner, as is evident by the display of the wreckage in Tehran after it was retrieved in Iranian coastal waters off the Kouh-e Mobarak area of Hormozgan Province. This has nailed the American lie, after initial denial that no drone was downed that its aircraft was in international airspace when shot down by Iran.
Soon the devilish American habit of uttering untruth all the time will be further exposed as the dedicated Iranian divers are in the process of recovering the heavy parts of the giant RQ-4A Global Hawk from the depths of the Strait of Hormuz – of course within Iran’s 12 km nautical coastline.

Is the wreckage they have on display authentic? And is it true that they are diving for heavier parts near the coast? And if they actually were retrieving the things from international waters, how well would the US be able to prove it?

11
Can Iran afford to put someone on the moon by 2025?
15
Were the arrested US citizens who walked into Iran merely “hikers”?
20
Was Iran Air Flight 655 shot down by mistake?
23
List comparing countries attacked by Iran and the USA accurate?
10
Has Iran gained 150 billion dollars due to the “Iran Deal”?
12
Did the CIA hire mobsters to stage riots in Iran during 1953 coup d'etat?
28
When John McCain was shot down was his mission to bomb a civilian light bulb factory?
13
Did an unmarried couple in Iran get shot for holding hands in 2007?
8
Was the debris of a missile presented by India authentic?
69
Is the infant mortality rate among African-American babies in Youngstown, Ohio greater than that of babies in Iran?