Have 1.5% of all nuclear reactors ever built melted down?

During a June 28, 2012, "Talk at Google", Stanford professor Mark Jacobson made the following claim:

One and a half percent of all nuclear reactors ever built, and there have been about 440, have melted down to some degree.

The slide with this claim appears at the timestamp where the link starts: 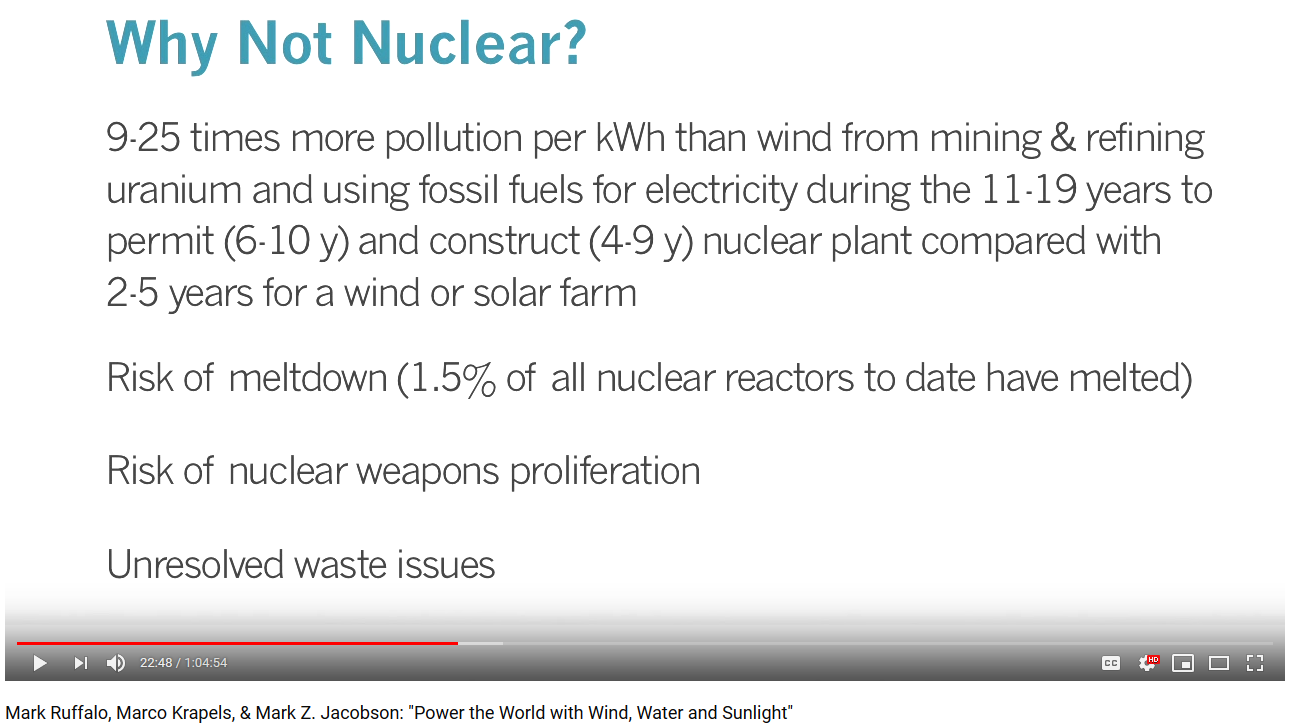 A few moments later, in talking through this point, he adds the caveat ("to some degree"), which is not on the slide.

This talk takes place over a year after the Fukushima Daiichi nuclear disaster, which basically put a freeze on new reactor construction, so the 440 figure is likely still the same despite the fact that this talk is now seven years old.

nuclear-energy power-generation
Share
Improve this question
edited May 22, 2019 at 16:00

The number claim is correct in the context of nuclear power stations.

The "440" reactors from the claim indicate, that we are talking about nuclear reactors for power generation in power plants. Therefore I won't include reactors used on submarines or vessels.

According to Shrader-Frechette (not a peer reviewed paper, but an open-peer commentary) there have been a number of apparent melt downs (emphasis added, list has been cleared of vessels and submarines).

To provide a best-estimate answer, the list below excludes: (a)serious non-melt accidents; (b) intentional or deliberate melts; and (c) supposed melts, not documented in reliable scientific literature.

Regarding (a), the lists below exclude fuel-loss or criticality accidents, however serious, if they do not partially melt the core. Thus, many damaging US-reactor accidents — such as the criticality catastrophe in Charlestown, Rhode Island; the fire near Chicago; the loss of cooling in New York; or the Nebraska and Connecticut reactor explosions — are not included in the lists below (see Pollack, 2011). Regarding (b), the lists also exclude melts that have been intentional or experimental, not the result of apparent accidents or negligence — such as those at Borax-1, SPERT, and TREAT reactors in Idaho. Regarding (c), the lists below exclude meltdowns for which detailed accounts are not available in refereed scientific literature, such as at the WTR reactor in Pennsylvania. Given the previous three caveats, (a)–(c), at least five unintentional, nuclear-core melts — all resulting in radiation releases, death, and injury — appear to have occurred in the US:

Given the same three caveats, at least 21 unintentional nuclear-core melts appear tohave occurred outside the US—all resulting in radiation releases, death, and injury:

Of these EBR-1, Santa Susana, SL-1, Fermi-1, Chalk River were research reactors, Mulvhill was a fast breeder for plutonium and not intended to generate power. If we take the as actual meltdowns in scope, 10 meltdowns have happened in nuclear power stations world wide since the 1950s. This would results in 1.6% of all reactors ever built for power generation melting down. If we only regard the three worst incidents at Three Mile Island, Chernobyl and Fukushima we have 5 major meltdowns (0.8% of reactors). So a lower bound on the estimate would be 0.8%.

Limitations: The claim is correct in the context in which it was provided (nuclear power stations). In the context of all nuclear reactors (power stations, research reactors, submarines and vessels, space craft, etc.) the claim is most likely not correct, but it is hard to verify, because independent information on reactor accidents in the military (e.g. US and Russian submarines) is limited.

The claim uses the 1.5% number as a means to question the safety of nuclear reactors. It is highly questionable if this is the right way to assess the safety or if other metrics are better. If one reactor is built and has a meltdown after 100 years, 100% of reactors had a meltdown. If 100 reactors are built and after 1 year one melts down, 1% of reactors had a meltdown. The percentages are totally different, although the cumulative reactor time and power output of operation is the same (given all reactors having equal output).

Additionally, just because there was a certain risk in the past does not necessarily mean that this risk will be the same in the future. Most of the accident in this study were in the 1950s - 1980s. Since then the incident rate has declined. With a new generation of plants being built, there may also potentially be more accidents. It is difficult to infer future risks from past risks.

A meltdown does not necessarily mean a catastrophic accident, because what matters more is, whether (and how much) radioactive material escaped into the environment. In risk assessment the commonly used metric is the number of severe accidents (e.g. after the INE Scale) per reactor year of operation.

In 2012, there were 437 nuclear reactors. From the World Nuclear Association:

Over 115 commercial power reactors, 48 experimental or prototype reactors, over 250 research reactors and several fuel cycle facilities have been retired from operation.

Thus, if just 1.5% of 850 reactors (or 13 reactors) suffered a meltdown, over 1.5% of nuclear reactors would have melted down. Glancing at Wikipedia shows 7 meltdowns between 1952 and 2011. Of the 7, I could only find references for 6 meltdown incidents. The 6 meltdown incidents (8 meltdowns):

October 5, 1966: Partial core meltdown of the Fermi 1 Reactor at the Enrico Fermi Nuclear Generating Station. No radiation leakage into the environment.

January 21, 1969: On January 21, 1969, it suffered a loss-of-coolant accident, leading to a partial core meltdown and massive radioactive contamination of the cavern, which was then sealed.

April 26, 1986: A flawed reactor design and inadequately trained personnel led to a failed backup generator test. This test led to a power surge which overheated the fuel rods of reactor no. 4 of the Chernobyl power plant, causing an explosion and meltdown, necessitating the evacuation of 300,000 people from Chernobyl and dispersing radioactive material across Europe (see Effects of the Chernobyl disaster). Around 5% (5200 PBq) of the core was released into the atmosphere and downwind.

March 11, 2011: A tsunami flooded and damaged the plant's 5 active reactors, drowning two workers. Loss of backup electrical power led to overheating, meltdowns, and evacuations. One man died suddenly while carrying equipment during the clean-up. The plant's 6th reactor was inactive at the time. [3 reactors suffered a meltdown.]

The [Finnish Center for Radiation and Nuclear Safety] said the accident occurred when ″the fuel channel of the number one reactor unit at the Leningrad nuclear plant was damaged on Nov. 30, 1975, when it was started up, and short-term radioactive substances were released into the atmosphere.″

The recorded message said the information came from Soviet nuclear officials after inquiries Thursday by the Finnish center.

The message said, according to Soviet authorities, the release of radioactivity was far less than the 1.5 million curies reported in earlier press accounts. The Soviets have said 50 million curies of radiation were released in the Chernobyl accident.

″Officials saw no reason to take special measures in the immediate vicinity of the power plant, and the reactor was back in use two weeks after the incident,″ the message added.

A Daily Mail article on the incident is also available. I am not saying the article is credible. I haven't seen a reference to this incident as a meltdown, even in even more uncredible sources.

On November 29, 1955, the reactor at EBR-I suffered a partial meltdown during a coolant flow test. The flow test was trying to determine the cause of unexpected reactor responses to changes in coolant flow (Wikipedia) (Atlas Obscura)

The SL-1, or Stationary Low-Power Reactor Number One, was a United States Army experimental nuclear power reactor in the United States which underwent a steam explosion and meltdown on January 3, 1961, killing its three operators. (Wikipedia) (Stanford)

Subsequently the [BORAX-1] reactor was used for power excursion tests which showed that rapid conversion of water to steam would safely control the reaction. The final, deliberately destructive test in 1954 produced an unexpectedly large power excursion that "instead of the melting of a few fuel plates, the test melted a major fraction of the entire core." However, this core meltdown and release of nuclear fuel and nuclear fission products provided additional useful data to improve mathematical models. (Wikipedia) (Argonne National Laboratories)

On December 12, 1952, the NRX reactor suffered a partial meltdown due to operator error and mechanical problems in the shut-off systems. For test purposes, some of the tubes were disconnected from high pressure water cooling and connected by hoses to a temporary cooling system and one was cooled only by airflow. (Wikipedia) (Canadian Nuclear Society)

Regarding the 1969 Saint-Laurent incident: On October 17, 1969 50 kg of uranium in one of the gas cooled reactors began to melt. (Wikipedia) (Stanford) According to Stanford, there were 2 meltdown incidents, once in 1969 and once in 1980. Thus, this is an additional meltdown.

As I have identified 13 meltdowns, 1.5% of all nuclear reactors built as of June 2012 have melted down to some degree. I have purposefully excluded currently military reactors and incidents on nuclear-powered military vessels. I have also purposefully excluded some events that are not universally called meltdowns (despite melted fuel) such as a nuclear incident at Chapelcross nuclear power station. Do note that there is not one universal definition of a meltdown. Also note, the claim is somewhat misleading. 3 meltdowns I have identified were somewhat deliberate in that the conditions for the meltdown were purposefully created for experimental purposes.

Not the answer you're looking for? Browse other questions tagged nuclear-energy power-generation .