On social media there are a lot of posts fuelled by the recent restrictions on abortion in Alabama and Missouri.

Some of these (the first is from Instagram and the second is from Twitter, although I saw it on Instagram) claim that “the penalty for aborting after rape is more severe than the penalty for rape” - and that therefore it’s a ‘war on women’. 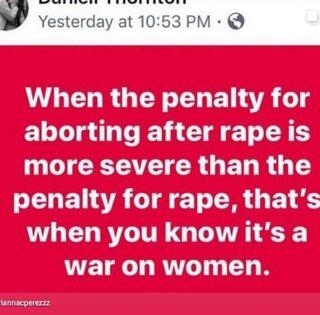 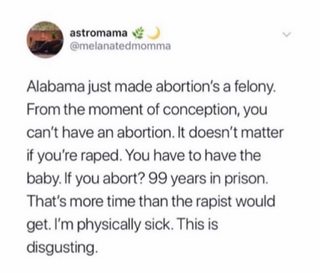 “Alabama’s just made abortion’s (sic) a felony. From the moment of conception, you can’t have an abortion. It doesn’t matter if you’re raped. You have to have the baby. If you abort? 99 years in prison. That’s more time than the rapist would get. I’m physically sick. This is disgusting.”

Obviously the claim that it’s a war on women isn’t clearly enough defined to discuss here, but I am interested to know the following. It’s also not actually giving the state, but I am inferring from the recent legislation that it is referring to the aforementioned states. Therefore, I would like answers to the following:

According to the BBC, a woman in Alabama suffers no legal repercussions for seeking, or having, an abortion:

however, the punishment for a doctor:

Under the bill, doctors face 10 years in prison for attempting to terminate a pregnancy and 99 years for carrying out the procedure.

CNN clarifies this with the words “up to”:

For example, doctors could face up to 99 years in prison for performing an abortion in the state.

Rape in the first degree is a Class A felony, which is punishable by both imprisonment and the imposition of a fine, in the following manner:

There is no difference to the defined punishment if the woman is impregnated due to rape. Potentially this would be taken into account during sentencing.

The potential punishment for a doctor performing an abortion is the same as the potential punishment for a rapist, with the possible difference being that I’ve not seen an article state that the doctor would not face the $60,000 fine. It seems likely that a doctor performing an abortion is a Class A felony too, and subject to the fine as well, but I don’t know that.

As a summary, of the second claim:

Correct, in most cases.

From the moment of conception, you can’t have an abortion.

Incorrect. You can’t have an abortion from when a heartbeat is detected, normally around 6 weeks. This does mean that lots of women will miss the cutoff before they know they are pregnant, but it’s better to be accurate when we make these claims.

It doesn’t matter if you’re raped.

Correct, rape is not an exception in this law, and neither is incest. The only exception is for the mother’s life being in danger.

You have to have the baby. If you abort? 99 years in prison.

This sounds like it is claiming the woman would go to prison (via the repeated use of “you”). This is incorrect, and dangerously misleading. No woman will receive criminal chargers for seeking or having an abortion. A doctor could receive up to 99 years in prison for performing an abortion.

That’s more time than the rapist would get.

Incorrect, it’s the same. The maximum of 99 years is the same for rapists as it is for doctors who perform abortions. Nobody has been sentenced under the new law as of the time of writing, so we don’t know what sentences will actually be given.

26
Do death penalty cases cost the state more than life-long imprisonment?
18
If attacked, does having a handgun increase your chance of injury?
9
Did banning abortion in Chile lead to lower maternal mortality?
33
Does the death penalty in California cost more than $300m per execution?
7
Do Virgina and Connecticut have the death penalty for those who work on Sunday?
55
Was a 15-year-old teen sentenced to 15 years because he took 5 seconds to stop intercourse with an 18-year-old?
72
In Massachusetts, can someone be "arrested and fined up to fifty-thousand dollars" for reporting suspicious behavior in a women's bathroom?
11
Does New York restrict voting more than Georgia's new law?
42
Is a married woman in Michigan required to have her husband's permission to cut her hair?
10
Was it ever common in the USA for women to use their husbands' Social Security Numbers as their own?