Does salt (or sodium) not make you thirsty?

This is from a Toronto MS thesis:

High dietary sodium intake is hypothesized to increase food intake (FI), fluid intake and glycemic response. Two short-term randomized repeated-measures studies measured the effects of acute sodium intake on FI, water intake (WI), subjective appetite (SA), thirst, and blood glucose (BG) in young men. Sodium additions were 740 and 1480 mg to a solid food (beans) in Experiment 1; and 500, 1000, 1500 and 2000 mg to a beverage (tomato juice) in Experiment 2. FI and WI were measured at ad libitum pizza meals 120 and 30 min later, respectively. SA, thirst and BG were measured at intervals before and after pizza. Compared with controls, treatments with added-sodium had no effect on dependent measures. In conclusion, acute intake of sodium in a solid or liquid matrix does not increase subjective ratings of appetite or thirst, ad libitum food or water intakes, or blood glucose in healthy young adults.

So neither subjective nor objective measures of thirst were increased by sodium in this study. It's not terribly clear to me how sodium was added in these experiments, but I presume it was common salt.

Anyway, is this finding consistent with other studies on the topic? Does sodium (or salt) not affect subjective thirst or subsequent water intake?

Let’s follow salt into the digestive system and see what happens. In the wall of the small intestine, the salt is absorbed into your bloodstream, making your blood saltier than it was before.

As the saltier blood circulates through the body, it makes the fluid outside of our body cells saltier than the fluid inside the cells.

There are also sensors in the thirst center in the brain that keep tabs on the saltiness of the blood. When the thirst center goes on alert because things are too salty and the body needs water to dilute the salt, that’s when you start to feel thirsty.

So they can't both be right without some quantification or further context.

Also, a 2015 Israeli study seem to contradict the high-school science lesson as well:

However, according to Prof. Leshem, despite our gut feeling that salt increases drinking, this relationship has not been studied in conditions simulating salt-rich foods such as savory appetizers. Therefore, in the present study involving 58 student participants, Prof. Leshem sought to investigate the effect of salt in solid foods on drinking. Participants were scheduled to come to the lab every few days after not having eaten or drunk anything except water, and not having smoked, for two hours. On the days they came, they were asked to taste nuts -- one time sugary candied nuts, another time salted nuts, and yet a third time nuts with no additives. They rated their level of thirst and, during a couple of hours in which they responded to various questionnaires, they got bottles of water. Each subject could drink as much water as he or she wanted.

The main finding was that the level of reported thirst and the actual quantity of water that the subjects drank after eating salty nuts were not different than following consumption of candied nuts or nuts without added flavors. To more deeply examine a possible correlation, the researchers selected the 10 male and 10 female students who had consumed the largest quantities of salt (an average of 4.4 grams and 3.7 grams respectively) and sought to determine whether within this subgroup there was a connection between thirst and drinking, but here too no such correlation was found. This means that even those subjects who consumed larger quantities of salt did not drink more.

N.B. there's also a 2017 study that challenges that in the long run (months) salt increases water consumption. But since the latter study seems rather unique insofar, let's stick with shorter time frames, for which more studies probably exist (and perhaps some meta-analyses).

TLDR summary: the high-school science summary of thirst regulation (by salt) is correct, but it's quite incomplete as a thirst regulation mechanism in general. In (recent) animal research, faster pathways have been identified, e.g. eating promotes thirst proportional to eating time, well before any salt-induced osmotic changes can affect thirst.

Since the latter research is quite new (2016), it has yet to be taken into account in human experiments with salty vs non-salty food, it seems. Basically, the mere act of eating is likely do be a substantial confounder in such food-based studies on thirst.

Some (older) infusion-based studies of "too salty" (hypertonic) vs isotonic solutions have reproduced the basic model of salt-thirst response even in humans.

The high-school science view is backed-up by actual neuroscience in rats/mice at least; from a year 2000 review:

hyperosmotic solutions of glucose and urea do not increase water intake, but hypertonic solutions of NaCl or sorbitol do. This increase in effective plasma osmolality (pOsm) appears to be detected by cerebral osmoreceptors located in the vascular organ of the lamina terminalis (OVLT), a structure in the basal forebrain that lacks a blood–brain barrier and therefore can respond readily to alterations in pOsm. In fact, increases in pOsm of only 1% to 2% stimulate thirst in animals, and further increases cause proportional increases in water intake. [citing Fitzsimons, 1963 ...] Surgical destruction of the OVLT eliminates both water drinking and neurohypophyseal VP [vasopressin] secretion in response to increased pOsm. [citing several studies, e.g. Thrasher et al, 1982]

Actually a more detailed 1999 paper exists on that last issue, not cited in the review probably due to publication timing; the 1999 paper found that near complete destruction of lamina terminalis, not just the OVLT region of it is needed to completely suppress osmotic (salt-induced) drinking in sheep.

Since it's doubtful thirst works any differently in humans, I suspect that there may be issues with how thirst is (noninvasively) tested in the latter, but insofar I haven't located any meta-analysis of human studies.

Also, from more recent (2015) neuroscience research, the stop circuitry for drinking water seems different than the start one, even in animals; from a popsci presentation of a 2015 study, outlining why this has to be the case

"When animals are thirsty, they start drinking," he says. "But they [also] have to stop drinking, otherwise they are going to just drink a huge amount of water, which is not healthy."

And they do stop, of course. But what's surprising is that animals stop drinking long before their bodies have a chance to absorb the liquid they're consuming.

"Hydration of the body takes 10 to 15 minutes," Oka says. "But normally, animals stop drinking within one minute."

And the actual stop-drinking circuits are also found in the lamina terminalis, at least in mice:

Here we show in mice that excitatory neural populations in the lamina terminalis form a hierarchical circuit architecture to regulate thirst. Among them, nitric oxide synthase-expressing neurons in the median preoptic nucleus (MnPO) are essential for the integration of signals from the thirst-driving neurons of the subfornical organ (SFO). Conversely, a distinct inhibitory circuit, involving MnPO GABAergic neurons that express glucagon-like peptide 1 receptor (GLP1R), is activated immediately upon drinking and monosynaptically inhibits SFO thirst neurons. These responses are induced by the ingestion of fluids but not solids, and are time-locked to the onset and offset of drinking. Furthermore, loss-of-function manipulations of GLP1R-expressing MnPO neurons lead to a polydipsic, overdrinking phenotype. These neurons therefore facilitate rapid satiety of thirst by monitoring real-time fluid ingestion.

So water intake and the thirst sensation might not be so directly correlated. Which probably makes researching the topic more complicated.

At least human studies that have followed more closely the animal studies in methodology, i.e. using hypertonic infusion rather than salty food, have found similar results to animal studies, e.g. Stachenfeld, et a. (1996):

To assess the fluid regulatory responses in aging adults, we measured thirst perception and osmoregulation during and after infusion of hypertonic NaCl) saline in older (72 +/- 2 yr, n = 6) and younger (26 +/- n = 6) subjects. Hypertonic saline was infused at 0.1 min-1.kg-1 for 120 min. On a separate day, the same subjects were infused identically with isotonic saline as a control. After infusion and a 30-min equilibration period, the drank water ad libitum for 180 min. Hypertonic infusion led to graded increases in plasma osmolality (Posm; 18 +/- 2 and 20 +/- 2 mosmol/kgH2O) and percent changes plasma volume (16.2 +/- 1.9 and 18.0 +/- 1.2%) that were in older and younger subjects. Osmotically stimulated increases in thirst (94.8 +/- 18.9 and 88.3 +/- 25.6 mm), assessed on a line rating scale, and plasma arginine vasopressin concentration (6.08 +/- 1.50 and 4.51 +/- 1.37 pg/ml, for older younger, respectively) were also unaffected by age. subsequent hypervolemia, both groups of subjects sufficient water to restore preinfusion levels of Posm. Renal handling of free water and sodium was also unaffected by age during recovery from hypertonic saline infusion, but was significantly lower in older subjects during recovery from saline infusion, resulting in net fluid retention and a significant fall in Posm (6 mosmol/kgH2O). In contrast to earlier reports of a blunted thirst response to dehydration hypertonicity, we found that osmotically stimulated thirst and renal osmoregulation were intact in older adults after hypertonic saline infusion. 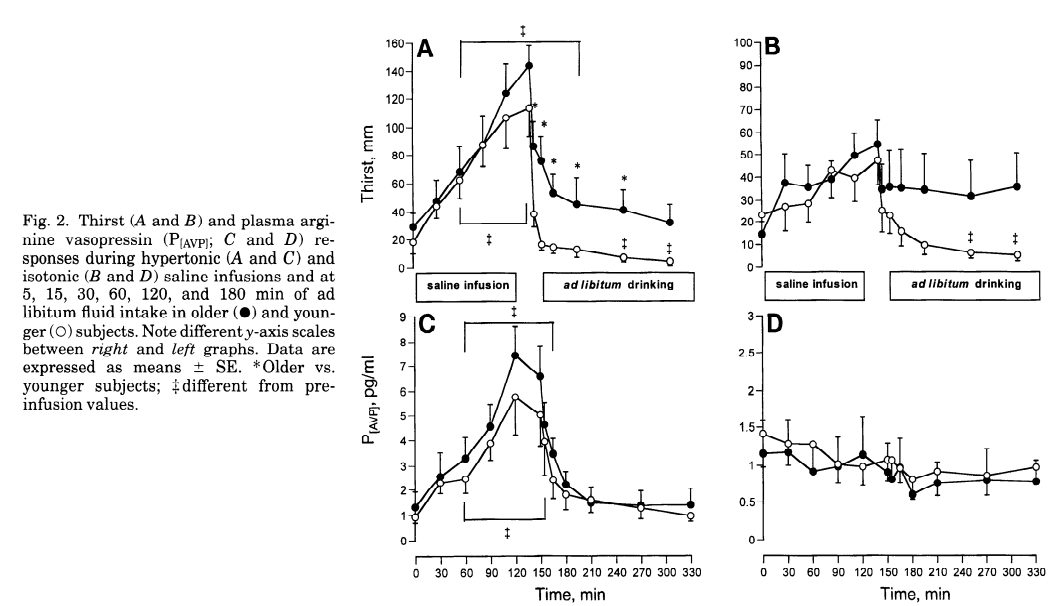 Perceptions of thirst, mouth dryness, and stomach distension were assessed by three visual-analogue rating scales. The subjects responded to the question, “How thirsty do you feel right now?” on a scale 180 mm in length with intersecting lines at 0 mm “not at all” and at 125 mm “extremely thirsty.”

There's a recent (2019) NEJM review which may have some clue why eating any food vs salty food might not make much difference in thirst:

it was found that when dehydrated mice are exposed to water, the activity of SFO and MnPO thirst neurons[57,62] and vasopressin neurons[63] also drops rapidly (within seconds). Conversely, ingestion of food, which portends an increase in osmolality, rapidly increases the activity of thirst and vasopressin neurons, well before blood osmolality increases.[62,63] It is as if these homeostatic neurons anticipate the consequences of certain actions or situations on energy and water balance.

The interesting papers cited there [62-63] are both very recent:

Based on the Nature 2016 paper, mice get more thirsty (as measured by SFO-Nos1 neurons) the longer they eat, well before there are any osmotic changes to be detected by their brain. Alas, non-invasive neuroimaging (like fMRI) is not sensitive enough to detect activity in groups of neurons like SFO-Nos1; these were tested using optogenetic photometry.

Basically eating anything solid appears to trigger some amount thirst, at least in animals. So I suspect more discriminating studies are needed when comparing foods, e.g. larger samples or more measures over time when different foods are compared with respect to thrist (in humans) unless direct neural measurements are made.

Not the answer you're looking for? Browse other questions tagged nutrition psychology physiology water neurology .

4
Does eating nonsalty food with MSG make you thirsty?

40
Is it beneficial to drink alkaline water (aka Kangen water)?
4
Does eating chocolate make you high?
35
Should we drink water before we feel thirsty?
6
Does the alcohol content of drinks make you fat?
8
Are bodily deficiencies "mapped" to facial acne?
4
Does drinking black tea increase prostate cancer risk?
13
Is diet soda as bad for your teeth as regular soda or methamphetamine?
23
Is this description of the processes which take place in the body for an hour after drinking Coca Cola accurate?
4
Does Diet Coke “attack your teeth, switch on fat storage mode, cause addiction, and deplete nutrients”?
4
Does eating nonsalty food with MSG make you thirsty?