Did the "The Hampshire Advertiser" publish an article about many droughts in Europe on Saturday July 17 1852?

Craig Kelly, an Australian Politician, shared this photo on Facebook in the context of global warming and climate change. The article contains dates of droughts and "excessive heat" during the approximate period 1152 to 1852.

Was this article published in The Hampshire Advertiser (on July 17, 1852 or at some other time)? 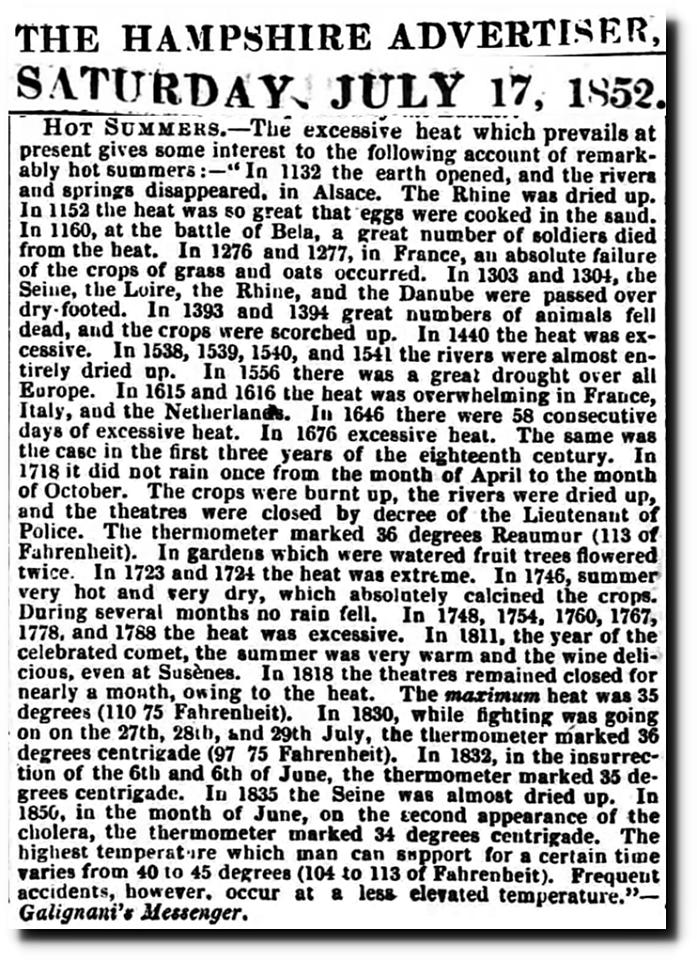 history climate-change
Share
Improve this question
edited May 12, 2019 at 5:50

I have no doubt that the article was genuinely published in The Hampshire Advertiser on the date specified. I haven't been able to find it, but the evidence is strong nonetheless.

It's important to note that newspapers tend to just reprint articles that other newspapers already published. They do this ridiculously often. (According to an article about American newspapers 1800-1860: “Most newspapers reprinted articles from other newspapers, and expected that their own articles would be reprinted elsewhere.”) In fact, that's why it says "Galignani's Messenger" at the bottom of your clipping; that's where The Hampshire Advertiser got it from. So here's a pastiche of the quote from different sources:

HOT SUMMERS.
The London Times, of July 29, quotes an article with the above heading from Galignani's Messenger. It is as follows:

The excessive heat which prevails at present gives some interest to the following account of remarkably hot summers: "In 1132 the earth opened, and the rivers and springs disappeared, in Alsace.

The Rhine was dried up. In 1152 the heat was so great that eggs were cooked in the sand.

In 1160, at the a battle of Bela, a great number of soldiers died from the heat. In 1276 and 1277, in Prance, an absolute failure of the crops of grass and oats occurred.

....and so on. There are several more newspapers I found that have the quote and I haven't gotten around to searching in some of the other newspaper databases I have access to.

I just found the original article published in Galignani's Messenger in the Gallica's database.

It's in the 2nd column, just before "Latest Intelligence".

That article doesn't source a previous one, so I can think that's definitely the origin of this text !

Not the answer you're looking for? Browse other questions tagged history climate-change .

37
Did a nuclear blast devastate Port Chicago on July 17, 1944?
14
Is climate change currently good for the world economy?
11
Was Christian Europe the first place to abolish slavery?
5
Was July 1936 the hottest month on record for mainland USA?
8
Did James Buchanan say there were "too many educated people in the world"?
57
Did Alan Turing publish a paper called The Imitation Game (as claimed in the movie)?
83
Did NOAA publish a fake map with temperature data it doesn't have?