Do dolphins intentionally intoxicate themselves with puffer-fish venom?

Since late 2013, outlets as serious as Smithsonian Magazine have circulated the claim that dolphins intentionally get "high" by harassing pufferfish. It is further claimed that this is a collective behavior in which dolphins pass around the fish to share among their pod. The claim continues to circulate on social media in the form of image memes like this one: 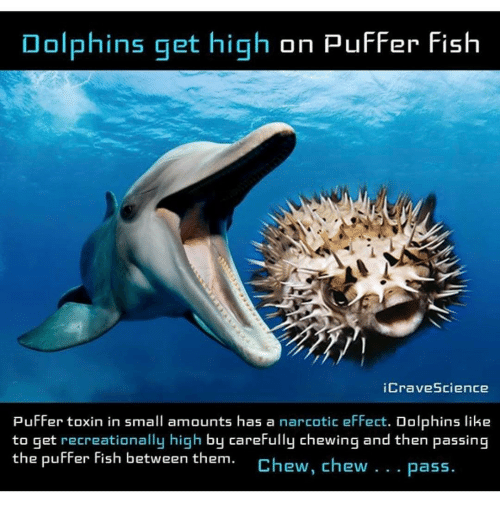 The only evidence for this seems to be observations filmed for a BBC TV series, Dolphins, Spy in the Pod. A relevant clip is available from the tabloid The Daily Mail, which describes it as follows:

In an extraordinary scene filmed for a new TV series, the dolphins are shown gently passing the fish between them. Experts believe the creatures are using the toxins, which emerge from the puffer fish as part of its defence mechanism, for their own enjoyment.

They nudge the fish with their snouts and as the toxin is released into the water, they seem to lapse into a trance-like state.

At one point the dolphins are seen floating just underneath the water's surface, apparently mesmerised by their own reflections.

The dolphins were filmed gently playing with the puffer, passing it between each other for 20 to 30 minutes at a time, unlike the fish they had caught as prey which were swiftly torn apart.

However, also dating from 2013, scientist / journalist Christie Wilcox raises doubts in a blog entry for Discover Magazine, mainly from a toxicological perspective:

Tetrodotoxin simply doesn’t make sense as a drug[...] In very, very, very low doses, tetrodotoxin causes numbness, tingling, and the slight lightheadedness that fugu, the Japanese preparation of raw pufferfish flesh, is known for. I guess it’s possible to see how one might relate these mild effects to the “high” feeling that comes from THC, the main ingredient in marijuana, but it’s a stretch to say the least. [...]

I find it tough to believe that dolphins are so careful that they can walk the fine line between tingly lips and maddening paralysis, especially when different individuals of the same species of pufferfish can carry vastly different amounts of toxin in their tissues. Instead, what I hear in the BBC’s description is naive animals learning a hard lesson: soon after ‘puffing’ on puffer, young male dolphins were filmed behaving strangely, even near-motionless at the surface. It doesn’t sound like a happy high; it sounds like the first stages of tetrodotoxin-induced paralysis, with the dolphins instinctively (and perhaps luckily) hovering in shallow water to retain the ability to breathe. It seems unlikely that they interact with puffers like this routinely.

I find Christie Wilcox's interpretation pretty convincing on its own, but I wonder if any other experts have weighed in on this or if any new observations have been made since 2013?

About Rob Pilley, the "zoologist and producer" who gave the Daily news their original quotes. A google scholar search does not turn up any research from him; none of the 120 papers by a R Pilley are zoological in nature. Most of them are probably by other people. He does have a decent list of credits on IMDB. This suggests that he is an expert on making nature documentaries, but not a research scientist.

The lead producer for the film, John Downer, is described in the by his own company as, "He made his name by abandoning the traditional style of nature documentaries and pioneering a highly inventive subjective approach." Reading this less charitably, I could say that he abandons scientific accuracy and reports whatever will fascinate viewers. She

As a contrast, Christie Wilcox's description of herself emphasizes accuracy and solid scientific experience. Despite apparently being mostly a science journalist, she has apparently published scientific papers on Toxicology as recently as 2017.

Note that calling out people's credentials rather than examining the evidence is an appeal to authority, a common type of fallacy. However, when I see a legit expert arguing against a TV producer, I raise my skeptic sense high.

When I did google scholar searches for "dolphin puffer," "dolphin drugs," and "dolphin hallucinogin" I did not find anything directly relevant. I didn't read all of the 1000 papers that popped up, so I might have missed something. It doesn't appear that scientific papers have discussed this topic extensively. I did find the following:

From ROUGH-TOOTHED DOLPHIN, STENO BREDANENSIS: A NEW SPECIES RECORD FOR THE AZORES, WITH SOME NOTES ON BEHAVIOUR (1995)

Four inflated puffer fish were seen with the dolphins and one of them, which was upside down, was being pushed around by one of the dolphins. It is thought that the behaviour was some type of play on the part of the dolphin. Toward the end of the encounter, several of the dolphins were observed lying motionless at the surface with their backs and the tops of their heads clearly visible. This behaviour is termed logging by CAWARDINE (1995).

Cawardine (1995) defines "logging or rafting" as "resting motionless at the water's surface in a horizontal position." [Google Books page 14]

This shows that other people have seen similar behavior and did not come to the conclusion that the dolphins were getting high.

From Why do Dolphins Play?,

This source also mentions in a table that dolphins have been seen playing with pufferfish. Between play and logging this shows there is an explanation for the behavior that does not involve getting high.

Conclusion: Actual scientists have not picked up his claim, and there are credible and simple explanations for the observed behavior.

Not the answer you're looking for? Browse other questions tagged ethology toxicology .

13
Is the Japanese emperor forbidden from eating fugu (puffer fish)?