Has there been a rise of flat-Earthers?

The rise of flat-Earthers in the United States...

And from The Guardian

Researchers believe they have identified the prime driver for a startling rise in the number of people who think the Earth is flat...

Is there a rise in the number of people who think the Earth is flat?

I found this YouGov article which states "Just 66% of millennials firmly believe that the earth is round." The same article shows that a higher percentage of respondents believe the Earth is round with an increasing age group. However, YouGov doesn't publicly release its methodology, so I am not particularly inclined to believe its results (especially if uncorroborated).

I have also seen the graph below. However, it indicates (supposedly) search volume, which may not be proportional to the number of flat-Earthers (i.e. if I search "Flat earth," it doesn't necessarily mean I am a flat-Earther). 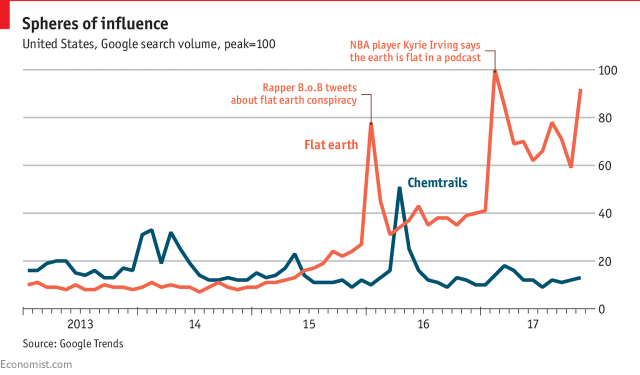 Note: The tweet mentions "in the United States." This question relates to people in general as in the entire Earth population.

19
How much has Magnetic North shifted in the last few years and would this affect aeronautics?
4
Could meteors have been been formed with lead, and mislead radiometric dating?