Did 3000BC Egyptians use meteoric iron weapons?

Egyptian weapons made from meteoric iron in about 3000 BC were highly prized as "daggers from heaven".[11]

I wasn't able to find this book online, but the description on Open Library suggests it's rather a "Biblical Archeology" book than a mainstream historical book.

Q1: Were 3000 BC Egyptians really using weapons made from meteoric iron?
Q2: If so, were these really called "daggers from heaven"?

If possible, give the actual archeological findings confirming this.

tl;dr As commonly understood, the claim is a bit exaggerated by a few hundred years. They had iron artefacts at the time and a few resemble weapons. This cannot be regarded as widespread use of weapons made from meteoric iron at the time 3000BCE.

No Egyptian archaeological evidence exists of iron smelting until the 6th century BC. The earliest known example of the use of metallic iron in Egypt dates to approximately 3400 BC.

The other iron objects were wrapped with Tutankhamun’s mummy; these include a miniature headrest contained inside the golden death mask, an amulet attached to a golden bracelet and a dagger blade with gold haft. All were made by relatively crude methods with the exception of the dagger blade which is clearly expertly produced. This suggests that the dagger was probably imported to Egypt perhaps as a royal gift from a neighboring territory, indicating that at this time Egypt’s knowledge and skills of iron production were relatively limited. Only further analytical testing can confirm if all of these artifacts are made from meteorite iron but they do appear to suggest that iron was a material used to indicate high status at the time of Tutankhamun’s death in approximately 1327 BC.

Meteoric iron
Bronze Age
Many examples of iron working from the Bronze Age have been confirmed to be meteoritic in origin.
In ancient Egypt an iron metal bead was found in a graveyard near Gerzeh that contained 7.5% Ni. Dated to around 3200 BC, Geochemical analysis of the Gerzeh iron beads, based on the ratio of nickel to iron and cobalt, confirms that the iron was meteoritic in origin.

This "many examples" should be read as 'comparatively many' in the context of archaeology. These "highly prized weapons" weren't issued for general use in the armies of the day.
It seems at first it was made primarily into beads and other jewellery (Thilo Rehren et al.: "5,000 years old Egyptian iron beads made from hammered meteoritic iron", Journal of Archaeological Science Volume 40, Issue 12, December 2013, Pages 4785-4792).

Indeed, sporadic iron objects were found at Egyptian sites, but it is generally accepted that iron smelting began in Egypt after its invasion by the Assyrians in 691 BC. (p19)

Egypt and areas under its influence along the Nile broadly followed this trajectory of copper, bronze and iron transition. Gold and other metals such as lead were also worked during this time, such that a long-distance trade had evolved by 2000 BC. Despite its advantages, iron was not universally accepted in the Middle East because Egypt only fully embraced it around 700 BC, more than six centuries after its adversaries, neighbours and trading partners adopted it (Craddock 2000; Holl 2000). The Cushite Egyptian Pharaohs were defeated by iron-armed Assyrians in 691 BC. This supports the argument that the adoption of metallurgy, such as technology in general, is culturally mediated; no matter how many perceived advantages there are, society determines what is and what is not acceptable. (p23)

"Origins of Metallurgy in Egypt and Adjacent Areas" in: Shadreck Chirikure: "Metals in Past Societies. A Global Perspective on Indigenous African Metallurgy", Springer: Cham, Heidelberg, 2015.

Its rarity making this iron a precious metal. Although quite quickly metal workers also used iron to complement metal edges.

Although this older work lists a Sumerian urudu-an-bar (meaning copper of the skies/heavens) from 3100 BCE as the oldest find.

Meteoric iron was also available to lithic people. This usually contains about 10% Ni and is therefore much harder and more difficult to work. The nickel content varies from 4 to 26%, and can be easily detected as there seem to be no ores capable of giving this level of nickel in a homogeneous form by direct smelting.
It has been calculated that there are at least 250 t of meteoric material extant, and that 99.4% of this is malleable." However, the problems are much the same as with native copper. When cold hammered, the material tends to crack along well-defined crystal planes. With care and annealing, or by hot forging, small artefacts can be made and lithic peoples in the Cape York area of West Greenland have been making tools from meteoric material containing about 8%Ni. While prolonged heat treatment at elevated temperatures will destroy the structure of meteoric iron in time, the material will be always recognizable by its composition.
R. F. Tylecote: "A History Of Metallurgy", Maney: London, 21992.

In summary we have to note that strictly speaking, iron was known at that time and a few artefacts would qualify as "weapons". But the iron from that time is at once much too rare and expensive (paid for in gold, six time the weight of gold judged as inadequate payment); and on the other hand of really inferior quality as a real world weapon, with bronze and even copper having better material qualities than the iron: so, practically speaking:

No, around 3000BCE the Egyptians didn't use enough iron weapons to really allow answering the question in the positive.

This became only widespread after 1400BCE, with smelted and forged iron and steel, starting most probably from Anatolia (the Hittites). 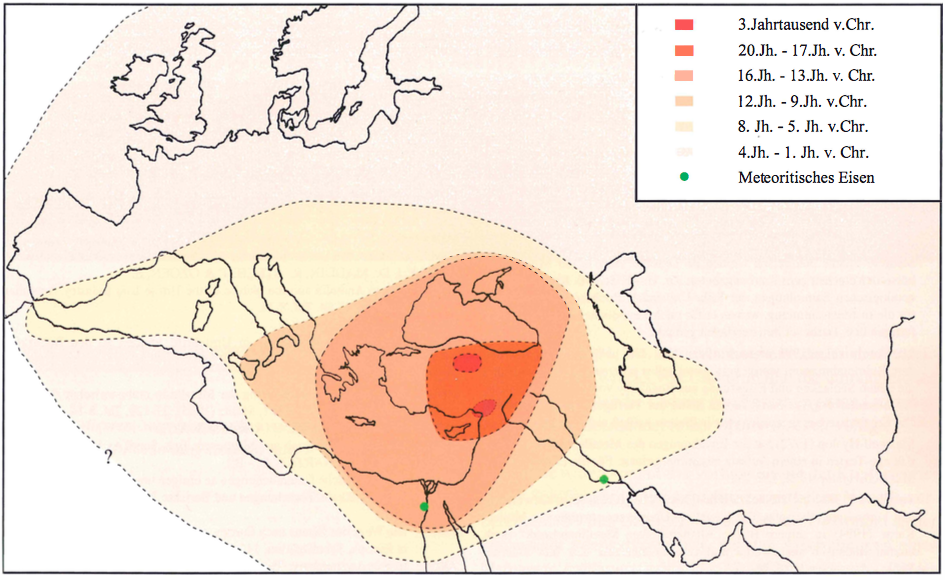 The actual artefacts used to date the spread of iron weapons:

11
Did ancient Indians invent guns, lasers, radars and nuclear weapons?
32
Did the Ancient Egyptians use twenty-sided dice?
2
Did people use to urinate everywhere at fancy balls?
8
Did the ancient Egyptians call aloe vera “the plant of immortality”?
14
Did Jesus use cannabis?
20
Did 120,000 Egyptians die building the Suez Canal?