Does USA imprison people of color at a higher rate than whites for the same crime convictions?

America locks people up at a higher rate than any other country, and bias is baked right in. If you’re a person of color or struggling to make ends meet, you’re more likely to be sent to prison than a white person convicted of the same crime.

Is this accurate? What does the data say?

And the absolute difference noted in the USSC report (quoted by liftarn's answer) still has unexplained gaps even after correcting for some possible confounders:

Using rich data linking federal cases from arrest through to sentencing, we find that initial case and defendant characteristics, including arrest offense and criminal history, can explain most of the large raw racial disparity in federal sentences, but significant gaps remain. Across the distribution, blacks receive sentences that are almost 10 percent longer than those of comparable whites arrested for the same crimes. Most of this disparity can be explained by prosecutors’ initial charging decisions, particularly the filing of charges carrying mandatory minimum sentences. Ceteris paribus, the odds of black arrestees facing such a charge are 1.75 times higher than those of white arrestees.

Note that "same crime conviction" can be a dicey issue:

In federal courts, the average sentence during 2008 and 2009 was 55 months for whites and 90 months for blacks (US Sentencing Commission 2010). The extent to which these disparities reflect differences in criminal conduct as opposed to differential treatment is a long-standing question in law and economics. That is, do otherwise similar black and white arrestees caught engaging in the same criminal conduct receive different prison sentences?

A key empirical challenge in answering this question is the lack of data on true criminal conduct. Of necessity, previous estimates of racial disparity in prison sentences proxy for criminal conduct with a measure of the severity of the crime of conviction: often the “presumptive sentence,” which is the recommended sentence under the applicable sentencing guidelines and takes account of aggravating and mitigating “sentencing facts.” However, neither the crime of conviction nor the presumptive sentence is an exogenous measure of criminal conduct. Each is the product of highly discretionary and negotiated processes, including charging, plea bargaining, and sentencing fact-finding. These processes are carried out in expectation of their sentencing consequences and potentially involve racial disparities of their own. [...]

We identify an important procedural mechanism that appears to give rise to the majority of the otherwise-unexplained disparity in sentences: how prosecutors initially choose to handle the case, in particular, the decision to bring charges carrying “mandatory minimum” sentences. The racial disparities in this decision are stark: ceteris paribus, black men have 1.75 times the odds of facing such charges, which is equivalent to a 5 percentage point [absolute] (or 65 percent [relative]) increase in the probability for the average defendant. The initial mandatory minimum charging decision alone is capable of explaining more than half of the black-white sentence disparities not otherwise explained by precharge characteristics.

So yes, you're more likely to be charged with an offense carrying a longer sentence if you are black, even after controlling for some confounders.

As for "more likely to be sent to prison than a white person convicted of the same crime", that's not exactly the same issue as I and the answer has been discussing. Here's the relevant decision tree (at federal level): 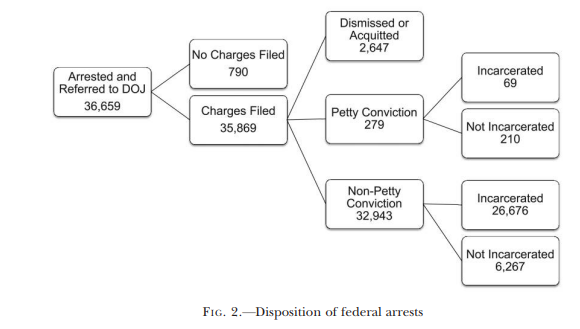 The 2nd sentence of your quote is asking if conviction leads to incarceration more often for whites than blacks (for the "same" crime), which is a decision in last non-leaf level of that tree. But the other, prior decision levels (arrests, charges) have been studied, and they are indicative of racial bias. Also, bias in the length of sentencing isn't the same as the probability of being sentenced at all (or not being) across groups. But I would be really surprised if these things are not correlated in practice.

A fairly dated and geographically limited study on the influence of Pennsylvania judge's race on sentencing does answer this odds-of-sentencing-by-defendants-race issue in its regression data (although it's not mentioned in the abstract, as it wasn't the study's main goal.) In that study, the black defendants were 1.25 times more likely to get a prison sentence, even after controlling for all the rest of the variable you can see there (type of offense etc.), including the sentencing judge's race (although black judges also gave harsher sentences overall). 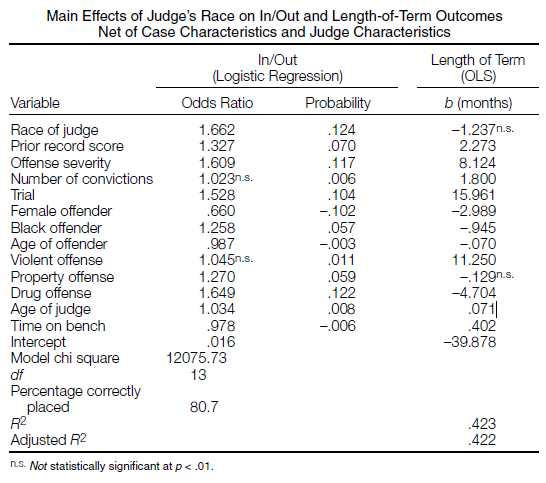 Also there are even some reviews in the area of imprisonment probability:

Written nearly two decades later, Spohn (2000) also reviews 40 recent studies on the role of race in sentencing, but splits outcomes into incarceration and sentence length. In her survey of the literature, a majority of studies find that race impacts the incarceration decision, but fewer than one-quarter report evidence that race affects sentence length. [...]

A more recent paper by Mustard (2001) improves on previous work by including additional controls in the regression analysis. Using federal data provided by the USSC, he examines the impact of race on the incarceration and sentencing decisions, as well as on departures from the sentencing guidelines. His cross-sectional regressions include controls for income, as well as interaction terms between race and income, race and education, and race and criminal history. He finds that African-Americans are more likely to be incarcerated and receive longer sentences, although some of this appears to be due to more extensive criminal histories and more severe offenses.

But none seem to really to pin down the "same crime" issue as well as the more recent research on prosecutions.

There have been several reports made on the subject of different punishments for the same crime based on skin colour:

18
Has the War on Drugs disproportionately affected minority communities?

15
Is the US Newborn Mortality Rate higher than 40 Countries?
19
If comparing white populations, does the U.S. have the same murder rate as Belgium?
10
Are there 10 time more home invasions in the UK than the USA?
16
Does immigration to the USA increase the unemployment rate?
83
Do blacks in the US get arrested more often for drug usage despite using drugs at the same rate as whites?
141
Is the USA murder rate at a high? Specifically is it at a 45 year high?
10
Will the United States be made up of more non-whites than whites by 2046?
16
Is the rate of food poisoning in the USA much worse than the rate in the UK?