Does Germany produce more waste than the US?

Are these numbers correct? Are they comparable measurements?

The reason for this discrepancy is because the data from the Umweltbundesamt includes construction and demolition waste (see figure below and surrounding text on your linked webpage) whereas the data from the EPA "does not include everything that is landfilled in MSW, or nonhazardous, landfills, such as construction and demolition (C&D) debris, municipal wastewater sludge, and other non-hazardous industrial wastes." The EPA data you cited only includes "trash, or municipal solid waste (MSW), as various items consumers throw away after they are used." 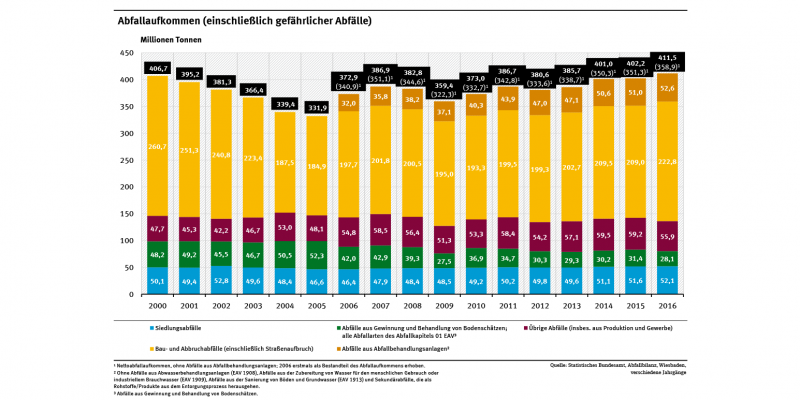 If you are interested in data for just municipal solid waste (like in the EPA website), @Milster has recommended this Statista page where it is shown that Germany has produced 51.05 million metric tons of MSW in 2017 whereas the Unites States has produced 258 million metric tons. Thus, the US produced 5 times as much municipal solid waste as Germany in 2017. The Statista values for US MSW in 2017 approximately agree with the EPA figure (below).

Is it true that a country with smaller GDP and a quarter of the population produces so much more waste?

No, Germany does not produce "so much more" Municipal Solid Waste (MSW) than the US.

Does the US not classify certain kinds as waste?

The cited EPA report only classifies MSW and does not include all other types of wastes.

Are the numbers comparable measurements?

No, the numbers are not comparable measurements. Certain types of waste are not included in the cited EPA numbers.

53
Does recycling create more pollution than it prevents?
17
Are guns in the USA used 80 times more often to protect life than to take it?
25
Did Canada go from 2.5 million protected lakes and rivers, to just 159?
15
Was the Jewish flag one of only two flags allowed in Nazi Germany?
32
Is Donald Trump forcing the EPA to take down all climate change information?
19
Did the Trump administration issue a blackout to the EPA?
15
Is Netherlands no longer able to start war without permission from Germany?
47
Is COVID-19 more dangerous than typical annual coronavirus variants?
3
Does the average carbon footprint per bitcoin transaction range from 233.4 to 363.5 kg of CO2?