Was breaking apart coins for change ever a common custom?

Discussion at many online sites asserts that it was a common custom (e.g., in medieval or Roman times) to pay for a purchase with a coin and have the coin broken apart, with part of it returned as change. In particular, the most common sub-claim is that the Spanish "pieces of eight" refers to a coin designed to be broken into eight pieces (which seems like it might be a misunderstanding of its value equated to 8 reales).

Often times a photo of one or more broken coins is presented as evidence. However, I've never seen any of these claims backed up references, citations, academic papers, historical documents on the practice, etc. Examples:

So, was cutting up coins for change ever customary in the past? And/or were coins ever designed for that use-case? Are there academic/historical studies attesting to those facts?

According to Cut Bronze Coins in the Ancient Near East in Actes Du XIe Congrès International de Numismatique:

The cutting in half of bronze coins to make change is a well known phenomenon in ancient times. In the West, the practice began in Sicily late in the 3rd century B.C. with the halving of the Poseidon/trident bronzes of Hieron II of Syracuse (c.274-216 B.C.).

There is also a catalog and photographs (page 339) of cut coins of the West Indies in the August 1920 The Numismatist, Volume 33 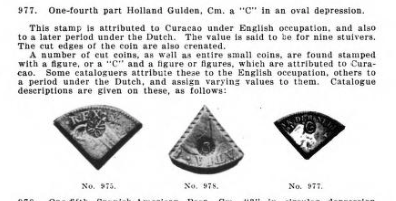 Not the answer you're looking for? Browse other questions tagged history economics .

3
Was there ever a cannibalistic butcher/meat pie/restaurant... shop?
48
Was the Titanic ever publicised as "Unsinkable"?
41
Were metered taxis busy roaming Imperial Rome?
11
Was Greenpeace ever sponsored by KGB?
24
Was Chinese water torture ever used as a torture method?
15
Is climate change currently good for the world economy?
9
Was prophylactic appendectomy or tonsillectomy ever performed upon children?
55
Was it ever cheaper to starve slaves and replace them than to provide them with food?
10
Was it ever common in the USA for women to use their husbands' Social Security Numbers as their own?