Are men more likely than women to accept an offer for casual sex?

It is widely believed that men are more amenable to offers of casual sex than women.

(Note: This is a different claim to "men want casual sex more than women" or that "women are more easily able to find casual sex partners". A Quora thread on heterosexual casual sex, Is it easier for women to find partners when they want to have sex? has many (unreferenced) answers that explain why, even if a woman's desire for casual sex matched that of a man, there might still be reasons for her to be wary, including: orgasm gap, lack of emotional connection, slut shaming, risk factors including pregnancy, STIs and violence.)

Are men more likely than women to accept offers of casual sex?

I sincerely hope someone finds a newer result, but one of the textbook studies for this is one from 1978, and repeated in 1982 with nearly identical results. The study was set at Florida State University, and had people of both genders asking strangers one of three questions:

The results for the more innocent "go out" question were similar between genders, but the others went heavily against males. This chart shows the success rates:

However, like I said, this study is from 40 years ago. Cultural norms have certainly changed in most aspects, and I'd love to see some updated results from a similar study.

For a newer study, I've found a study that:

They concluded their meta-analysis, and two experiments they carried out, with:

However, men were more liberal in their choice in either condition, compared to the female subjects.

First, they show results of Clark and Hatfield of 1989 (brought in the other answer), summarised as:

In their study, four male and five female psychology students approached a total of 96 opposite-sex subjects at Florida State University. After a standard introduction, ‘‘I have been noticing you around campus. I find you to be very attractive,’’ the experimenter’s confederates asked one of three questions randomly: ‘‘Would you go out with me tonight?’’,‘‘Would you come over to my apartment tonight?’’ or ‘‘Would you go to bed with me tonight?’’ Men and women were equally likely to consent to a date, but men were significantly more likely to agree to the apartment or casual sex offers. No female participant agreed to having casual sex.

The aggregated results are:

Moreover, they created their own experiment:

They obtained the following results:

In an experiment based on pictures shown on a computer, the differences were significantly smaller (yet still with significantly more men interested in casual sex):

Subjects were seated in front of a laptop and had the opportunity to ask questions. The experimenter also explained to them that they could withdraw their consent to the experiment at any time. They then were presented with 10 pictures of people of the opposite sex in a random order. For each picture, they were asked how attractive they found the person and if they wanted to have a date or sex with them, respectively. During the testing, subjects were left alone in the room, with a researcher outside the door so subjects could ask questions any time. After finishing the testing, subjects completed a questionnaire. At that point subjects still believed they would meet the people they had chosen from the pictures. 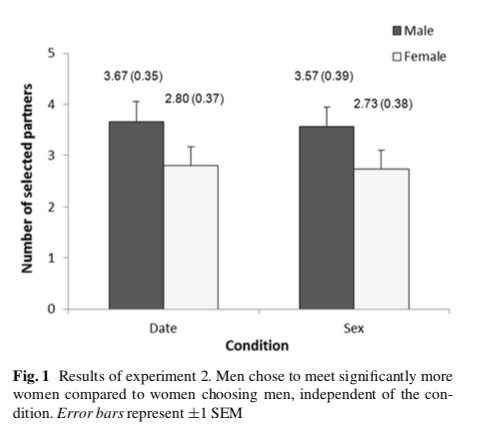 In another study by Terri D. Conley, Perceived Proposer Personality Characteristics and Gender Differences in Acceptance of Casual Sex Offers (2011), summarized in Casual Sex: Are Men and Women So Different?, they considered an offer by their best friend, and in another - by a famous celebrity.

Conley (2011) conducted a second study that asked participants to consider whether or not they would accept a casual sex proposition from their best friend of the opposite sex. Initially, it appeared that women were less likely than men to accept such an offer. However, when controlling for perceived sexual capabilities of the partner, women accepted the propositions just as often as men.

In the celebrity context there is little difference (though, I admit it does not fit the "average man/woman" criterion from the original question):

Not the answer you're looking for? Browse other questions tagged sexuality gender .