As of February 2019, were US wages rising at the "fastest pace in decades"?

The President of the USA, Donald Trump, told during his "State of the Union address" speech on 5th February 2019, that

[...] wages in America are rising at the fastest pace in decades

Source: at about 46 minutes on this video from YouTube.

Can this statement be considered true, and with what context (as affirmations derived from statistics are often oversimplified)?

As vague as the claim is, there does not appear to be any angle to take in which it is true.

Looking at the decades: 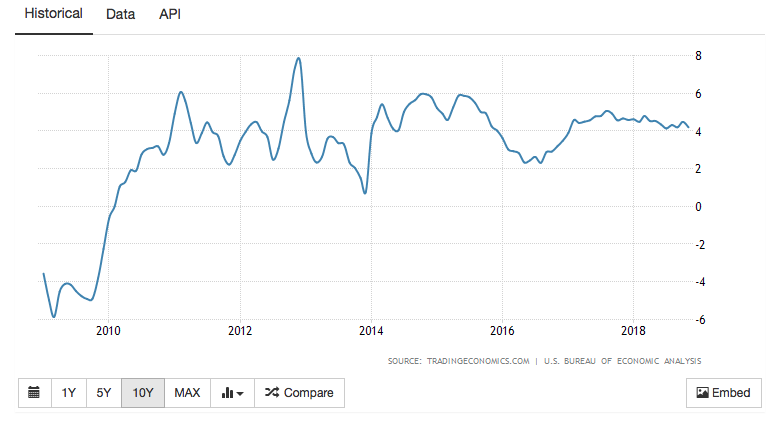 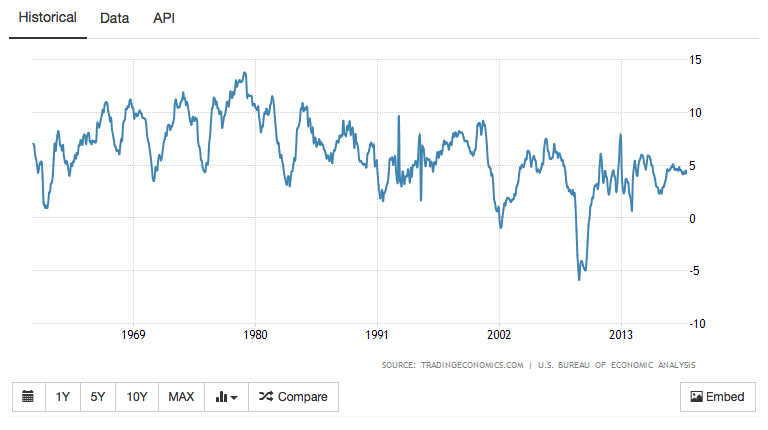 Note that the above is addressing the "rising fastest pace" "in decades".

If you really want to give some credit to a somewhat rosy looking statistic, perhaps Trump had some absolute numbers like these in mind:

But that is, of course, quite different.

Looking at the exact claim, we see it is not right either way.

U.S. workers are seeing the largest nominal wage increase in a decade, the Labor Department reported Wednesday, as companies compete harder for employees than they did in recent years.

Wages rose 2.9 percent from September 2017 to September 2018, according to the Labor Department’s Employment Cost Index for civilian workers, a widely watched measure of pay that does not take inflation into account.

That is the biggest increase — not adjusted for inflation — since the year that ended in September 2008.

Prices have risen significantly in the past year, especially for gas and rent. Adjusted for inflation, workers’ wages grew 0.6 percent over the year, making the increase the largest since 2016, according to the Labor Department.

Sluggish pay growth has been one of the biggest problems in this recovery, but employers are finally having to hike wages at a more normal level typically seen during good economic times. Unemployment is at a 49-year low and there are more job openings than unemployed Americans, which forces companies to fight for available workers.

“Wages are grinding higher as the labor market continues to tighten,” said Justin Weidner, an economist at Deutsche Bank. “Wage growth is likely to be over 3 percent again soon.”

On Friday, the Labor Department will release the other most-watched wage metric: average hourly earnings. Many economists expect that will be above 3 percent for the first time since April 2009. […]
Wage growth has been steadily rising in the past year, according to the Employment Cost Index. From September 2016 to September 2017, wages and salaries rose 2.5 percent, the Labor Department said.

Some have argued that companies were holding off on increasing wages because they were having to put more money toward benefits, but the Employment Cost Index also tracks benefits costs, and those have not risen as much as wages. Benefits grew 2.6 percent in the year ending September 2018 vs. 2.4 percent in the prior year.

President Trump has taken credit for the strong economy and frequently likes to tout low unemployment and solid job growth when he is on the campaign trail ahead of the midterm elections. Economists say his policies deserve some credit for triggering faster growth, but unemployment has been falling steadily for eight years and wages have been inching higher.

“It’s not about the tax cuts. This is about the gradual tightening in the labor market finally forcing employers to pay more,” said Ian Shepherdson, chief economist at Pantheon Macroeconomics. “There’s no question the trend is rising, but we are not exploding. We are still in a phase of gradual, incremental creep.”

Trump campaigned heavily on bringing back blue-collar jobs. While manufacturing and other blue-collar professions are seeing some of the fastest job growth since the mid-1980s, pay is not rising. Most of the wage growth in the Employment Cost Index is coming from service-sector jobs. Pay in the “goods-producing sector” has actually slowed in the past year, notes Michael Pearce, senior U.S. economist at Capital Economics.
[…]
“Putting food on the table is a constant struggle. I was going to school to be a dental assistant, but I was in a car crash, resulting in nerve damage to my hand,” said Morales, who is 28. “I do the best I can with what I have. Costs keep going up, but my wages haven’t kept pace.”

Business Insider: Here's why wages in America have been going nowhere, 2018 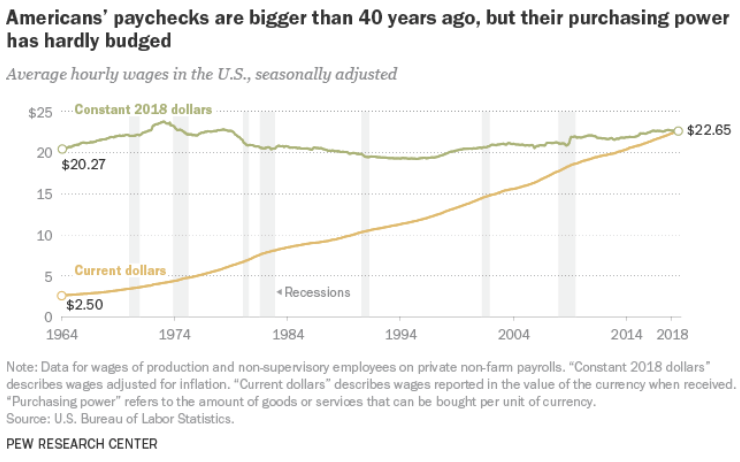 On some fronts, the economy is steadily healing from the Great Recession. The unemployment rate is down, and the pace of monthly job growth is reversing some of the damage inflicted by the downturn. But the economy remains far from fully recovered.

A crucial measure of how far from full recovery the economy remains is the growth of nominal wages (wages unadjusted for inflation). Nominal wage growth since the recovery officially began in mid-2009 has been low and flat. This isn’t surprising–the weak labor market of the last seven years has put enormous downward pressure on wages. Employers don’t have to offer big wage increases to get and keep the workers they need. And this remains true even as a jobs recovery has consistently forged ahead in recent years.

Nominal wage growth has been far below target in the recovery Year-over-year change in private-sector nominal average hourly earnings, 2007–2019

There was a single small bump in wages, well below policy targets, over almost one decade, for a subset of "wages". As the starting point for this statistic was chosen to coincide with the start of the ongoing banking and financial crisis, this is misleading, on top of being blatantly false for the plural of 'decades'.

It's a vague claim because it doesn't specify over what interval (monthly or yearly), real versus nominal, hourly wages or weekly wages.

However, the Bureau of Labor Statistics reported 11 January 2019 that:

Real average hourly earnings for all employees increased 0.5 percent from November to December

These are not annualized, so the numbers would need to be multiplied by 12 for an annualized rate.

According to this BLS link there was a peak year-over-year real hourly earnings increase of 4.8% in July 2008-2009.

So the claim is false at least on the basis of year-over-year, real wages, both hourly and weekly.

Politifact.com fact-checked Trumps SotU speech and came to the conclusion that wages do indeed rise in the United States:

One common measurement of wages is median usual weekly real earnings for full-time wage and salary workers 16 years and older, an inflation-adjusted figure.

During Trump’s presidency, this figure has risen from $351 to $355, an increase of 1.1 percent over the better part of two years.

But they also pointed out that this trend already started during the Obama era. Wages are on a steady raise since 2014, and that rate of increase didn't really change much after Trump moved into the White House. You can see the numbers on this chart from the Federal Reserve Bank of St.Louis.

But the current wage increase began in earnest in the second half of 2014, when Obama was still more than two years away from leaving the White House. Overall, wages increased by 7.5 percent over that period, from $330 to $355.

This was an increase of 8.5% over 4 years compared to the 1.1% over 2 years Trump is boasting about.

Now one might be able to find some truth in Trump's statement by cherry-picking the data or finding different ways to measure wage increases, but generally speaking the claim "fastest raise in wages since decades" is dubious.

Table 1 in this BLS report shows that, when adjusted for inflation and seasons, the average weekly income overall was higher in 2017 and 2018 than in 2009-2016. It also shows the highest number of workers. 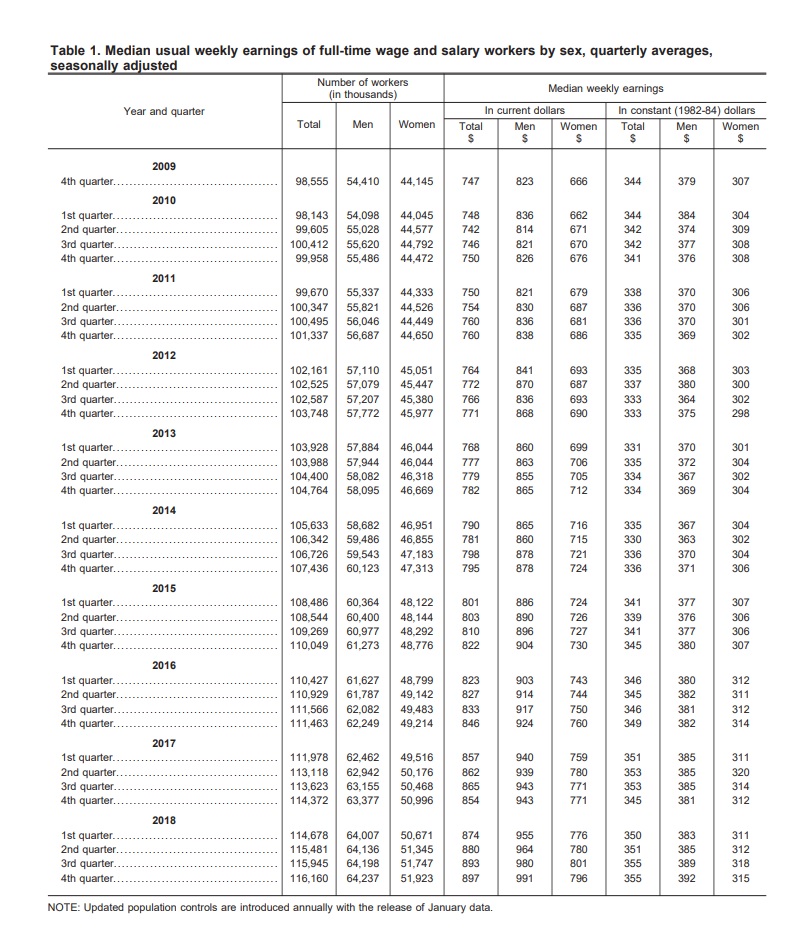 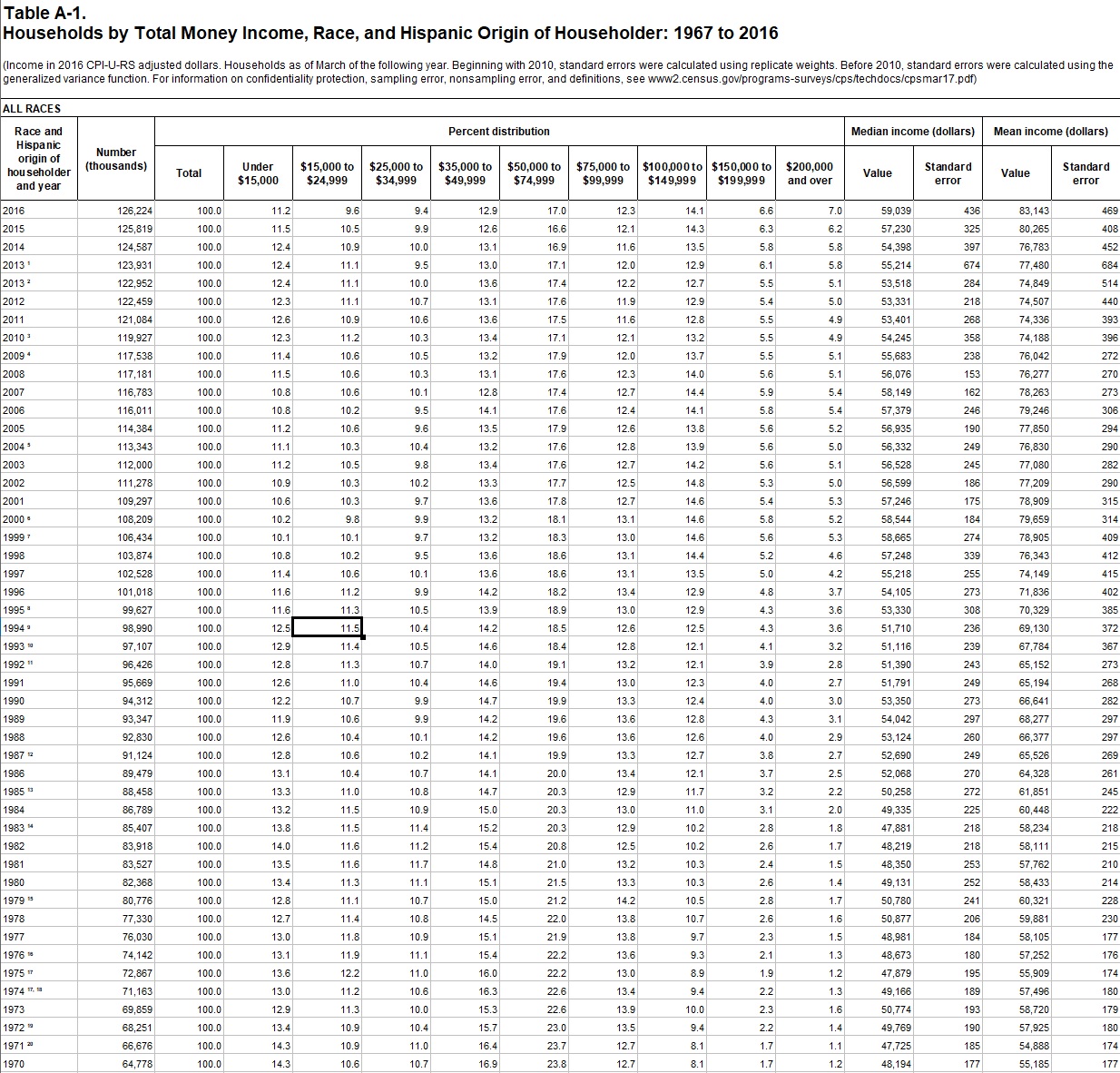 So the bls report shows weekly incomes decreasing from 2009 to 2014. The current wage increase begins in 2014. In the bls report, the year with the largest jump is 2015 (+$7.25). The census report doesn't quite match up. In it, the turn-around is in 2013. This is because of the time periods measured. This report shows the most recent valley from 2007 until the present.

In summary, wages are rising fastest only in the sense that we are in a multi-year period of wages consistently rising the fastest since at least 1969. That said, while 2018 was the highest paying year on record when adjusted for inflation, it was not the fastest growing year on record.

Not the answer you're looking for? Browse other questions tagged united-states politics economics employment .

12
Are wages stagnant over the past 40 years in the USA?

12
Are wages stagnant over the past 40 years in the USA?
4
Is this graph of changes in real wages since the recession correct?
5
Were the vast majority of lost manufacturing jobs since 2000 lost due to automation?
15
Will the US military receive a 10% pay raise in 2019?
17
Is the global inequality as measured by the Gini index rising or falling?
9
Did India shoot down any Pakistani F-16 on 27th February 2019?
0
During the 2019 Bolivian election count, were the comms and electricity cut off at the election HQ?