Is there any truth to the claim that people who have ring fingers that are longer than their index fingers are attracted to the opposite sex? 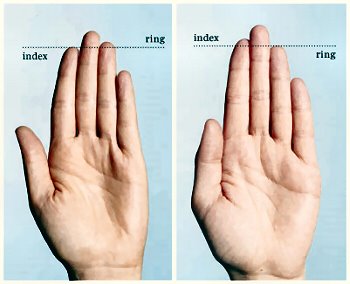 As an example, see this study:

Our results suggest that events before birth (or even before conception in the case of older brothers) influence human sexual orientation. The masculinized right-hand 2D:4D ratio in homosexual women may reflect fetal androgen levels that are slightly higher than in heterosexual women. Homosexual men without older brothers have 2D:4D ratios indistinguishable from heterosexual eldest sons, indicating that factors other than fetal androgen (such as genetic influences[8], [9]) also contribute to sexual orientation. Finger measures indicate that men with more elder brothers, including those men who develop a homosexual orientation, might be exposed to greater than normal levels of prenatal androgen.

A more layman's summary of the same study from BBC:

Scientists from California found that lesbian women have a greater difference in length between their ring finger and index finger than straight women do.

The same pattern was also found for homosexual men - but only when the researchers looked at those males that had several older brothers.

Please note that the study did not indicate direct causality, merely correlation, though it did propose a theory deriving the higher likelyhood of both traits (finger length ration and homosexuality) from the same underlying cause - fetal androgens.

Not the answer you're looking for? Browse other questions tagged sexuality causality .

25
Do mechanical techniques for penis enlargement work?
37
Does sexual abuse lead to homosexuality?
13
Are there examples of exclusive homosexuality in non-human animals?
14
Are specific scents sexually attractive to women or men?
3
Does short hair reduce (or mark reduced) sex drive in women?
16
Are brothels to have sex with animals increasing fast in Germany?