Is this image of a skinny polar bear misleading? [closed] 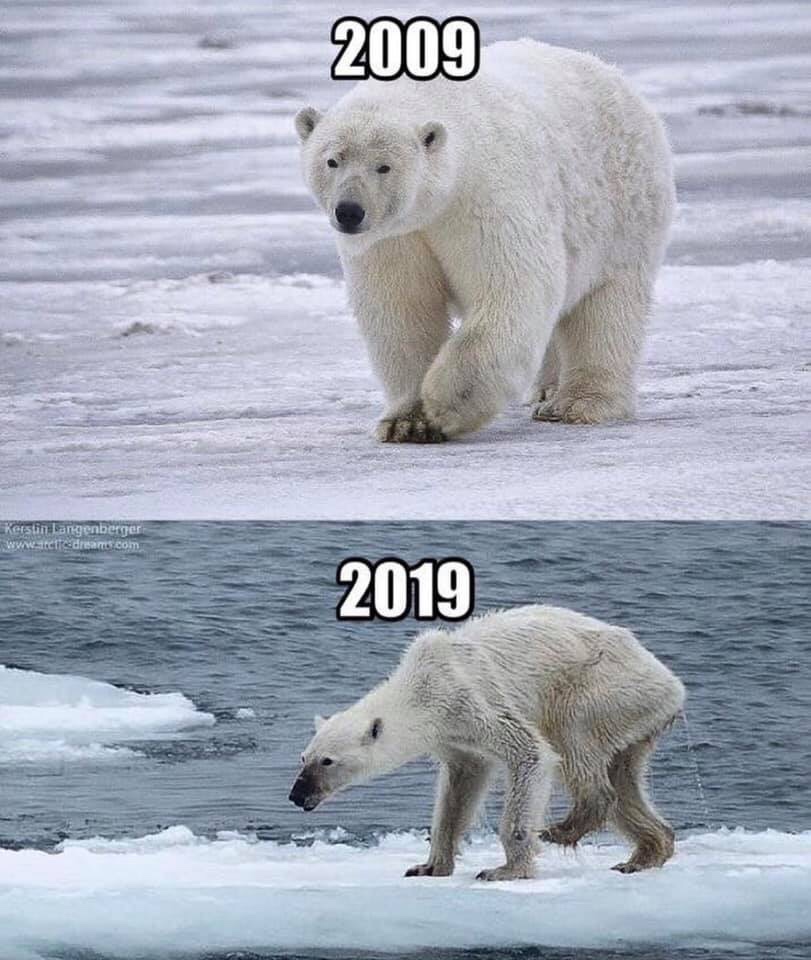 It’s been shared nearly 50k times, as of writing this.

My question is is this accurate? My main suspicions are the following:

I am aware that it may be difficult to find much evidence around these photos.

They are, actually, irrelevant to the question as summarized by you on request. The pictures are meant to be illustrative; criticising the second picture for e.g. giving the "wrong" year is attacking a straw man.

(For completeness, I am addressing your questions about the picture at the end of this answer, anyway.)

Due to warming air temperatures, ice-floe breakup in western Hudson Bay is currently occurring three weeks earlier than it did 30 years ago, reducing the duration of the polar bear feeding season.[163] The body condition of polar bears has declined during this period; the average weight of lone (and likely pregnant) female polar bears was approximately 290 kg (640 lb) in 1980 and 230 kg (510 lb) in 2004.[163]

I don't think there is reason to believe that this is offset by an increase of 20% in body weight in other regions (lacking any plausible increase in living conditions).

As for your questions about the image in particular:

2019 has only just begun. It seems a little unlikely that the image of the polar bear was taken in the last 15 days (but not impossible, of course)

The second polar bear appears to have just emerged from water (drops coming from its tail?). This can often cause fur to clump (it happens to my dog when he is bathed). Is this causing a lot of the difference?

An image search for "wet polar bear" shows a wide range of results, with the specimen pictured under "2019" definitely being on the emaciated side. Yes, wet fur makes a difference -- but not that much.

Were the images taken at different times of year? I believe that polar bears hibernate. It could be that the first polar bear has been eating, storing up fat for the winter period, and the second has just left hibernation.

Polar bears are not true hibernators. But even a healthy female bear just out of "hibernation", being wet does not look like the specimen in the "2019" picture.

Is the image of the same polar bear? I’m fairly confident it isn’t - hence I’ve taken it to be a comparison of the typical bear then and now.

It's nowhere claimed that it's the same bear. The life expectancy of a wild polar bear rarely exceeds 20 years.

Not the answer you're looking for? Browse other questions tagged climate-change animal-welfare .

31
Does this graph show climate-change predictions don't meet observations?
2
Did global warming cause temperatures to drop because of polar vortex episodes?
11
Are polar bears doing well despite a reduction in sea ice?
24
Does Susan Crockford have any scientific credentials related to polar bears?
198
Is this news article from 1912, essentially explaining climate change, real?
6
Is this picture of the melting ice at the North Pole legitimate?