Is only 4% of original forest left in the US?

The 2009 video The Story of Stuff makes several rather incredible claims. For example:

Where I live, in the United States, we have less than 4% of our original forests left.

My gut feeling tells me to be skeptical of this number. Is it correct?

Yes, this figure is consistent with estimates from 20 years ago.

The 1995 paper Endangered Ecosystems of the United States: A Preliminary Assessment of Loss and Degradation collates some relevant estimates from the literature in Appendix A.

It goes on to break the USA down into smaller regions, and cites consistent statistics for those - e.g.:

This shows it is more than one or two papers making these nationwide estimates - they are shored up by several ecologists who have reached similar conclusions in different regions.

This article is concerned not only about ecosystems being paved over, but also loss in quality:

Ecosystems can be lost or impoverished in basically two ways. The most obvious kind of loss is quantitative--the conversion of a native prairie to a corn field or to a parking lot. Quantitative losses, in principle, can be measured easily by a decline in areal extent of a discrete ecosystem type (i.e., one that can be mapped). The second kind of loss is qualitative and involves a change or degradation in the structure, function, or composition of an ecosystem (Franklin et al. 1981; Noss 1990). At some level of degradation, an ecosystem ceases to be natural.

So, these figures do NOT represent clear-felling of these forests - the impacts may be more subtle.

However, as a literature review, it is dependent on the individual papers for their definitions of "original", "virgin", "old-growth" etc., and hence the translations in the quotes above.

I tried to follow up on some of the references to see how they used the terms. I had limited success. Ironically, the papers from the 1980s and 1990s are difficult to access, but a 1923 paper they cite is freely available online!

96% of virgin forests of northeastern and central states eliminated by 1920 (Reynolds and Pierson 1923).

The cited bulletin, on page 8, explains:

The Northeast and Central States had each cut 96 per cent of their original areas of virgin timber. The Lakes States had cut 90 per cent, and the South was not far behind.

That bulletin is mainly concerned with the effect on the declining yields of ongoing timber production and its ability to serve markets after World War I, rather than the ecological issues.

I'm assuming that by "original forests" the video refers to old-growth forests, and that the point considered 100% is the total forest area of year 1630. 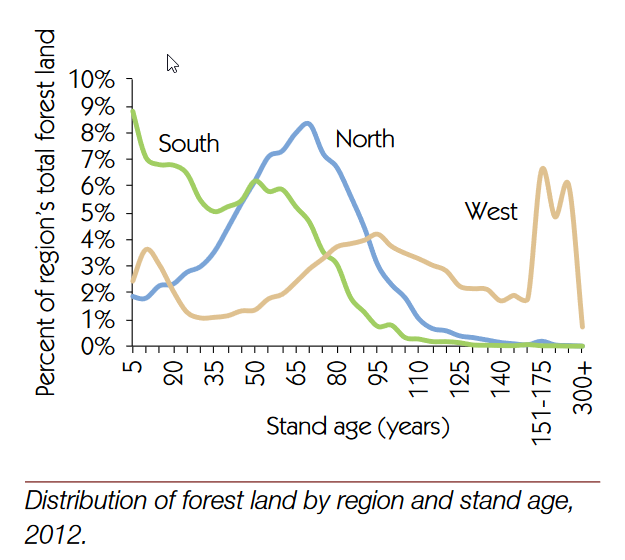 As you can see, forests older than 150 years account for about 15-20% of western forests (which themselves constitute about a half of US forest land, see page 8 of the brochure). This brings us to 7-10% of present-day forests which have been growing for 150 years or longer. Since the total forest area shrunk from 1,023 million acres in 1630 to 766 million acres in 2012, this number corresponds to 5-7.5% of original forests in 1630.

According to Wikipedia, original hardwood forests needs to be at least 150 years old in order to develop old-growth characteristics in one or two generations of trees. There are other criteria which can disqualify a forest from being old-growth even if it's old enough, primarily significant human disturbance.

However, much of the forest land has been cut at least once.

Not the answer you're looking for? Browse other questions tagged united-states environment .

8
Is there more forest in the Northern Hemisphere now than 100 years ago?

37
Are only 700 out of 480,000 life scientists creationists?
10
Would the US deficit disappear if the costs of medical activity were more like the rest of the world?
19
Is $77/week the weekly budget for a minimum wage worker?
9
Do US farmers apply Roundup to non-GMO wheat crops 7-10 days before harvest?
6
Did pro-Israel Americans convince the U.S. to initiate the Iraq War?
148
Are there 96 million workers in the US who want a job and can't get one?
15
Was Ross Capicchioni shot by a friend as part of a gang initiation?
74
Is America “the only nation where this [a mass shooting] regularly happens”?