Although the extinction of the non-avian dinosaurs is dated at ~66 million years ago there are a number of purported cave drawings that I've found online that (if verified and interpreted in a certain way!) could suggest that hominids and non-avian dinosaurs were present on the Earth at the same time.

One debunked case of human-dinosaur interaction can been found in this question on 'human footprints' found alongside dinosaur footprints.

This website (and another site) shows a number of examples of cave paintings of what is purported to be dinosaurs. It's easy to see how early cave painters could have exaggerated anatomical features to represent an extant animal in some rudimentary form and make the animal look like what would appear to us as a dinosaur.

The depiction of dragons in mythology and folklore (see here and here) is well documented, but the earliest references to these don't span much further back than 5000 years ago. Although zoomorphic depictions of man-animals appear as far back as 35,000 years, see here, I'm unsure whether other figurative representations of animals were around at the time i.e. to explain why dinosaur paintings may appear in caves.

Furthermore, in the New World, there were many large mammals that rapidly became extinct as a result of fast human colonization (see Jared Diamond's book Gun's, Germs and Steel), some of which were painted in caves.

Did non-avian dinosaurs and hominids overlap in time?

Non-avian dinosaurs were extinct about 65 million years ago, as the most recent dinosaur bone was directly dated as being 64.8 ± 0.9 Ma old.

The fossils we have found so far are incompatible with non-avian dinosaurs still being in existence after that time frame.

So, assuming from the rest of your question that we should look at hominins, there is a direct measurement of the age of the split between chimpanzees and homo through genes and it is 10-13 Ma ago:

Thus hominins would not begin their existence until 50 million years after dinosaurs became extinct.

There is a simple factual response based on the fossil record, "No. Dinosaurs and people did not coexist" but this does not really answer the question "did humans draw dinosaurs?" -- with the implicit assumption that the two coexisted. Here I will provide some commentary about cave drawings (petroglyph, pictogram) with sources for further reading.

Mythologies created by rock art researchers and archaeologists are not limited to invented unlikely meanings, they also include vast numbers of “likely explanations”. Unfortunately, plausibility of interpretations does not render them any more credible, in fact from the epistemological perspective the unlikely versions are preferable: they are easier to refute. [1]

The above quote talks about created mythologies, but the warning applies to other subjective interpretation, such as "what does this image represent?"

One common such interpretation is that ancient humans have created representations of dinosaurs found in petroglyphs. However, these interpretations are wrong. Common explanations are local wildlife (such as a giraffe), or artistic liberties or human-animal hybrids. For instance, this paper (abstract) outlines several famous cases:

To support claims of the coexistence of humans with dinosaurs and pterosaurs, young-earth creationist authors have identified several pieces of ancient rock art as depictions of dinosaurs or pterosaurs. Here, nine such claims are investigated. An alleged pterosaur painting in Black Dragon Canyon, Utah, is actually not a single painting. Its "head" and "neck" are a painting of a person with outstretched arms. Its torso and limbs are those of a painting of a second person with outstretched arms, whose body continues into the "pterosaur's" "wing." The other "wing" is a painting of a horned serpent. The three paintings only appear connected because someone outlined the group with chalk. An alleged dinosaur petroglyph in Havasupai Canyon, Arizona, is a stylized bird with an extension on one foot; the hooked line that represents its head and neck is a stylized bird head. A second alleged dinosaur petroglyph in Havasupai Canyon is a stylized bighorn sheep or rabbit. An alleged dinosaur cave painting in Tanzania is an obvious giraffe. Three alleged cave paintings of long-necked dinosaurs in Zambia have short necks and most likely represent lizards. An alleged dinosaur painting on Agawa Rock in Lake Superior Provincial Park, Ottawa, represents Underwater Panther, a supernatural lake guardian of Ojibwe tradition. An alleged pterosaur painting at Alton, Illinois, is the product of the imagination of a nineteenth-century American author. These pieces of rock art now join the ever-growing pile of discredited "evidence" for the ancient coexistence of humans and dinosaurs. [2]

A similar article (by the same author as [1] that repeats many of the same examples of [2]) also expands on other critical failings of identification, such as a "mastodon" being incorrectly identified and another instance of a mastodon in a cave painting less than 100 years old. [3] Despite the many examples of incorrect attribution and misidentification, there is some sense in which this question is legitimate, which is some mythical reconstruction of available evidence by prehistoric man.

In several historic locations, the existence of fossil footprints was deemed to be of special significance to historic hominins, significant enough to be recorded (for example, [5]). In some cases, the fossil was reproduced in petroglyph, and there is at least one instance where a mythological creature was reconstructed from footprints, for instance: 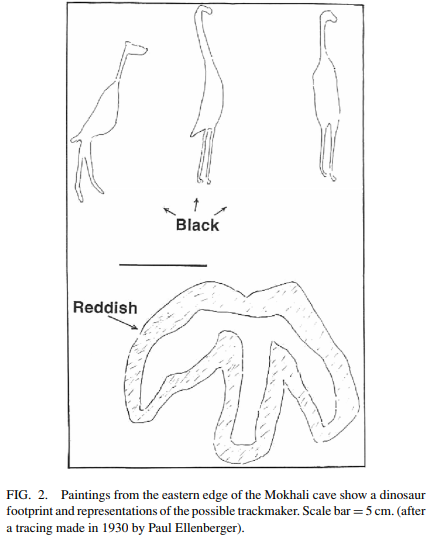 (taken from [4].) The petroglyphs are reported favorably in [1][2], and [3] as a reconstruction from the tridactyl footprints; a mythical creature called "//Khwai-hemm" that, at the time of the story telling, only its tracks remained (i.e., the fossil footprints). A similar mythological construction near a similar footprint is identified in [6] 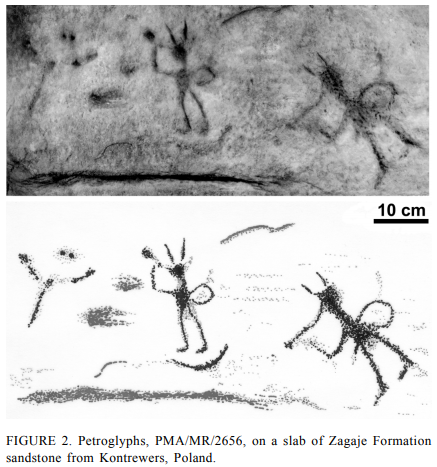 There is no fossil evidence humans and dinosaurs co-existed (see other answers). The cave paintings given as evidence to support that claim are either 1) clearly misidentified (vocabulary word of the day: Pareidolia ) or 2) a mythological construction based on local folk lore.

all non-avian dinosaurs, estimated to have been 628-1078 species, as well as many groups of birds did suddenly become extinct approximately 66 million years ago.

That's 49 million years between the death of the last (non-avian) dinosaur and the birth of the first hominid.

In New Zealand, the tuatara have many similarities with dinosaurs. Tuataras are still alive today. They are not technically considered dinosaurs, but if you are willing to relax your critera, they might have enough similarities to claim some level of human-dinosaur interaction? Here's a quote from the wikipedia page: "Although tuatara are sometimes called "living fossils", recent anatomical work has shown that they have changed significantly since the Mesozoic era".

The definition of "dinosaur" can be a tricky business. If cave drawings are your yardstick, then the depicted accuracy tends not to be extremely accurate, which might admit distant cousins of true dinosaurs. You could also consider the komodo dragon, crocodiles, alligators, goannas... not dinosaurs, but possibly inspiration for drawings that look like dinosaurs.

I should say that I agree with the explanation given in the other answers for the cave drawings in your links. They make a convincing argument that the drawings are stylised depictions of animals or mythical creatures, as covered by the other answers.

Not the answer you're looking for? Browse other questions tagged evolution young-earth-creationism paleontology .

15
Is the fossil KNM-ER 1470 evidence that other dating methods other than the fossil record are inaccurate?
18
Did paleontologist Stan Taylor discover human footprints dated from the period of dinosaurs?
1
Have scientists found 700,000-or-more visible annual ice layers?

13
Did Lucretius write about evolution and natural selection?
15
Is the fossil KNM-ER 1470 evidence that other dating methods other than the fossil record are inaccurate?
3
Did large herbivorous dinosaurs have any predators?
11
How much traces lasting a million years would human civilization leave after perishing?
9
Did the Earth have so little oxygen that dinosaurs couldn't exist?
3
Did the appendix evolve independently in marsupial and placental mammals?
104
Was this 4th grader's creationist quiz on "Dinosaurs: Genesis and the Gospel" real?
18
Did paleontologist Stan Taylor discover human footprints dated from the period of dinosaurs?