Does homosexuality in males steeply decline with age?

The 2013 book My Genes Made Me Do It! Homosexuality and the Scientific Evidence (text) argues that homosexuality is, at most, only weakly and indirectly genetically based, and that conversion therapies are effective.

As part of this argument, it claims that homosexuality decreases in men as they age, using old Kinsey data to support it: (from page 49-50)

Although the Kinsey surveys of 1948 and 1953 greatly exaggerated homosexual and bisexual numbers, they showed one interesting trend, also borne out by subsequent studiesâ€”a steady decline in homosexual fantasy and activity with increasing age compared with heterosexuals 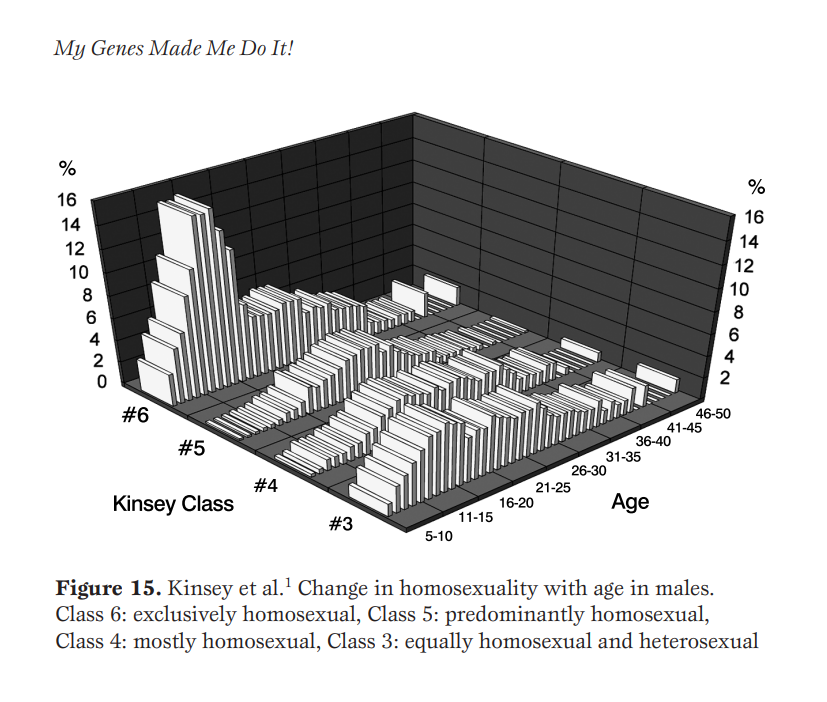 Is there good evidence that, as men get older, there is a decline in their homosexuality (both fantasy and activity) at a faster rate than their heterosexuality.

Related question which did not receive a useful answer; the only answer explained how survey answers were of limited reliability.

Properly conducted longitudinal studies have found that, if anything, the trend is in the opposite direction.

Only two longitudinal and prospective studies have examined changes in sexual identity over time, both of which were conducted among young women (Diamond, 2000; 2003; Sophie, 1986). Although no comparable studies exist on the sexual identity development of males, three longitudinal studies of young men have examined changes in sexual attractions (Dickson, Paul, & Herbison, 2003; Stokes, Damon, & McKirnan, 1997; Stokes, McKirnan, & Burzette, 1993). Taken together, the studies have found considerable consistency, as well as change, in sexual self-identification and attractions over time. For example, among 80 female youths (65% college students, and over sampled for youths who did not self-identify as lesbian, bisexual, or straight), Diamond (2000; 2003) found that 70% were consistent in their self-identification as lesbian, bisexual or unlabeled after two years and 50% were consistent after five years. An additional 15% transited to a lesbian or bisexual identity after two years, as did 14% after five years. Few youths transited from a lesbian, bisexual, or unlabeled identity to a straight identity. Among 216 behaviorally bisexual men (ages 18 â€“ 30 years), Stokes and colleagues (1997) found that over the course of one year, 49% reported no changes in sexual orientation, 34% became more homosexually oriented, and 17% more heterosexually oriented. Clearly, the consistency and change documented by these various research studies must now be understood.

Regarding the quoted graph, Kinsey's report was based on self-selected interviewees and no attempt was made to obtain a representative sample. At the time this was ground-breaking research because merely talking about the subject was considered taboo, but you cannot trust any statistics derived from these interviews because of the number of potential confounding factors.

In particular, the graph shows a huge hump in category #6 at ages 13-15 and the smaller one for category #3, but nothing at that age in categories #4 and #5. This lack of correlation between the different categories strongly suggests some kind of sampling artefact.

Two possible explanations that occur to me are:

I can't prove either of these theories, but they explain the graph shown at least as well as the theory that homosexuals turn straight as they get older.

That book is pretty much garbage. Thereâ€™s an interesting RationalWiki article about My Genes Made Me Do It, however itâ€™s rather incomplete. Regardless, I believe the author used Laumanns 1994 self reporting survey of Americans, and simply because less old people reported a gay orientation he used it to infer that peopleâ€™s homosexuality declines with age. Obviously the more sensible conclusion to draw is the fact that many older people grew up in a very socially conservative period and were married to women, thus identified as heterosexual. Keep in mind they had to do face to face and phone interviews, so admitting you were gay would be a bit hard if you had a wife. Identity is very different from your actual attractions. Thatâ€™s why so much social science is flawed, because ideally we need a mind reader to determine peopleâ€™s true sexual orientation.