Is this picture of the melting ice at the North Pole legitimate?

There are multiple stories about the melting of ice at the North Pole, and I know enough about climate science to recognize the seriousness of the issue — my question is not about that. I've recently seen a couple stories that have this picture or similar: 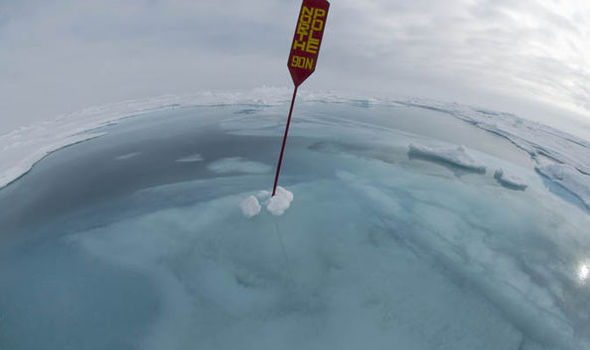 The caption on a very similar photo at ABC News reads:

A sign indicating North Pole is seen among melting ice in this undated file photo.

The word "undated" makes me a tad suspicious. Can anyone find a legitimate provenance for this photo? I'm cautious because it's a very shareable photo, but I don't want to share it if it's an exaggeration of the current state of affairs.

The icebreaker Yamal has been traveling to the North Pole since 1994, including tourist trips.

The photographer Marketa Jirouskova took such a trip to the North Pole.

The official caption of the photo is "Sign indicating North Pole for tourists, amongst melting ice, Arctic Ocean "

The only question is how much the icebreaker disturbed the ice in the photo.

For timewise comparison, this is an August 1958 video of waterskiing at the North Pole, when the USS Skate submarine surfaced in open water next to a scientific research group there: https://www.youtube.com/watch?v=vqWSe6dOgO0

20
Did the development of agriculture prevent an ice age occurring?
9
Are the leaked Heartland Institute documents legitimate?
14
Will melting icecaps and glaciers cause the ocean to rise?
49
Did the Arctic Ice Sheet grow by 60% from 2012 to 2013?
0
Does Beck's chemical analysis of CO₂ discredit the Law Dome ice core findings?
6
Did both higher temperatures and an ice age exist at CO₂ levels ten times the present?