Is this chart of executive branch criminal prosecutions accurate? 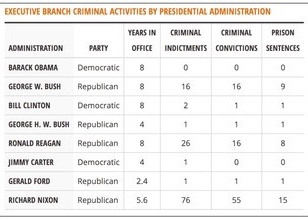 I am curious about the accuracy of the numbers quoted. In particular, are the Republican numbers inflated or Democratic numbers deflated?

The chart below only includes people who served in the administration, and excludes others (like members of Congress and private individuals) who may have also been swept up and indicted for the same scandal. The “Convictions” list includes both those who went to trial and were found guilty as well as those who plea bargained and pleaded guilty.

Chart from original version of question, for those interested: 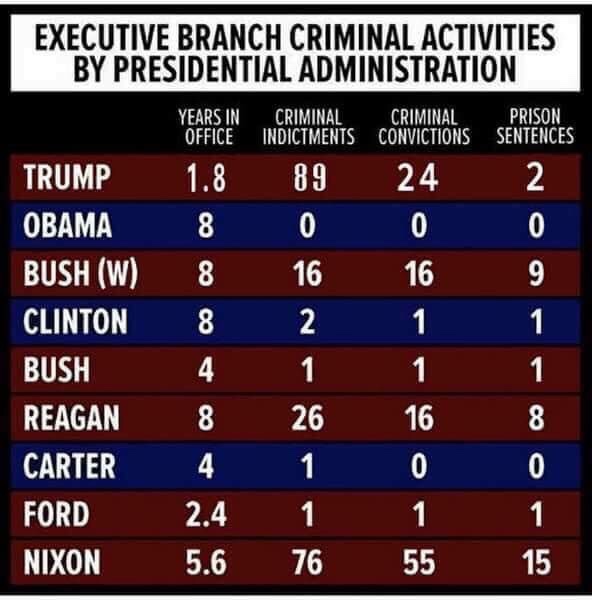 Wikipedia has a list of American federal politicians convicted of crimes. This list is broken down first by administration, and then by branch of government.

Mendoza pleaded guilty to attempted voyeurism ... and was sentenced to ninety days incarceration (suspended), one year of supervised probation and a $100 dollar assessment for the Victims of Violent Crime Act.

Clinton administration Agriculture Chief of Staff Ronald H. Blackley was convicted and sentenced to 27 month. The judge said this is the second highest position in the Department of Agriculture, but I don't see any evidence the he was a presidential appointee.

If the entire executive branch is considered, there are multitude of other people that have been convicted.

The original source of the table actually lists the names of the people being included, with the exception of Nixon people, where only 19 of the supposed 76 people are listed.

A double standard was used. For example Eric Holder and Anne Gorsuch Burford were both held to be in contempt of congress, but neither was prosecuted. The original source of the table doesn't mention Eric Holder at all, and falsely states that Anne Gorsuch Burford was convicted. It was stated that only appointees were being considered for Obama, but non-appointees were included for other presidents. The source falsely states that J. Lynn Helms was convicted, when in fact he merely signed a consent order agreeing not to, in the future, do a certain municipal bond activity, and insisting that his signature had been forged, and 3 years latter the forger was convicted of the forgery.

Roughly, considering just political appointees + Spiro Agnew, for crimes while appointed, including people pardoned after conviction, the "convicted" column of the table should be:

Wikipedia has a quick summary of notable political scandals at https://en.wikipedia.org/wiki/List_of_federal_political_scandals_in_the_United_States . Here's a quick tally without finessing the data: count the number of bullet points for each administration. This overcounts by including data points that aren't in the OP image, like the Niger uranium forgeries (no one was indicted, arrested, or served jail time). Additionally, data is skewed towards the present (older administrations have fewer entries). But this should give a rough comparison by "degree of scandal" in a administration. Sub bullets on the list include notable individuals that were convicted or pardoned (e.g., in Watergate) so I've included a count of those as well.

You can start debating items on the list, like how much of Iran-Contra should be under Reagan vs Bush. But I think this wikipedia list at least corroborates the general message that Nixon, Reagan, and W. Bush have had more political issues than other presidents.

The book Corruption and American Politics highlights these scandals:

I'm not sure that Clinton should really be in the same category as Nixon and Reagan, but I wanted to include this perspective.

(Sorry for not being definitive in this conclusion, but that's my inner skeptic.) I think that the source for the image spends a lot of time discussing methodology and data sources, something a lot of internet meme posts don't do. At a high level, the methods and data are sound. Second, the original image is broadly supported (again, at a high level) by data from wikipedia. (Note: I am not citing a single statement as fact, but aggregating a set of statements; this should be more accurate). This broadly agrees with the book Corruption and American Politics, though perhaps the Clinton administration should be perceived as less pristine than initially portrayed in the source image.

Closing thoughts: It's true that Nixon, Reagan, and W. Bush had more political scandals than other presidencies; on the low end of "scandalness," are Clinton and H. Bush. I don't think the (R) next to their names is a sign of correlation to scandal though. For instance, Ford and H. Bush both had fewer problems than other Republican administrations.

No, the graphics are incorrect.

The graphic talks about "Executive Branch Criminal Activities". The Executive Branch is a well-defined term of the US Government, and includes many departments and government corporations.

Nidal Hasan was a member of the executive branch (in particular, the United States Army Medical Corps) during Barack Obama's presidential administration. He was convicted of 13 counts of murder and 32 counts of attempted murder for his November 5th, 2009 attack. He was sentenced to death.

However, the graphics suggest no members of the executive branch received indictments, convictions or sentences during the Obama administration.

Therefore, they are technically incorrect by official definitions.

35
Is this map of Israel-occupied territory accurate?
2
Are the claims in this infographic about the UK Prime Minister accurate?
77
Is this pie graph describing US government spending accurate?
13
Did President Trump sign an executive order defunding Planned Parenthood (International)?
8
Is this a chart of permits you need to build a highway in the United States?
71
Is this photo of Jeremy Corbyn and caption accurate?
21
Was the supreme court Executive Order 13780 injunction stay unanimous?