Are these photos of burned home surrounded by pristine trees in California due to the forest fires real?

These photos are circulating on social media. Are they real? How can a forest fire burn homes in the center of a forest without burning the trees?

Portion of Paradise, CA after the "Forest Fire". 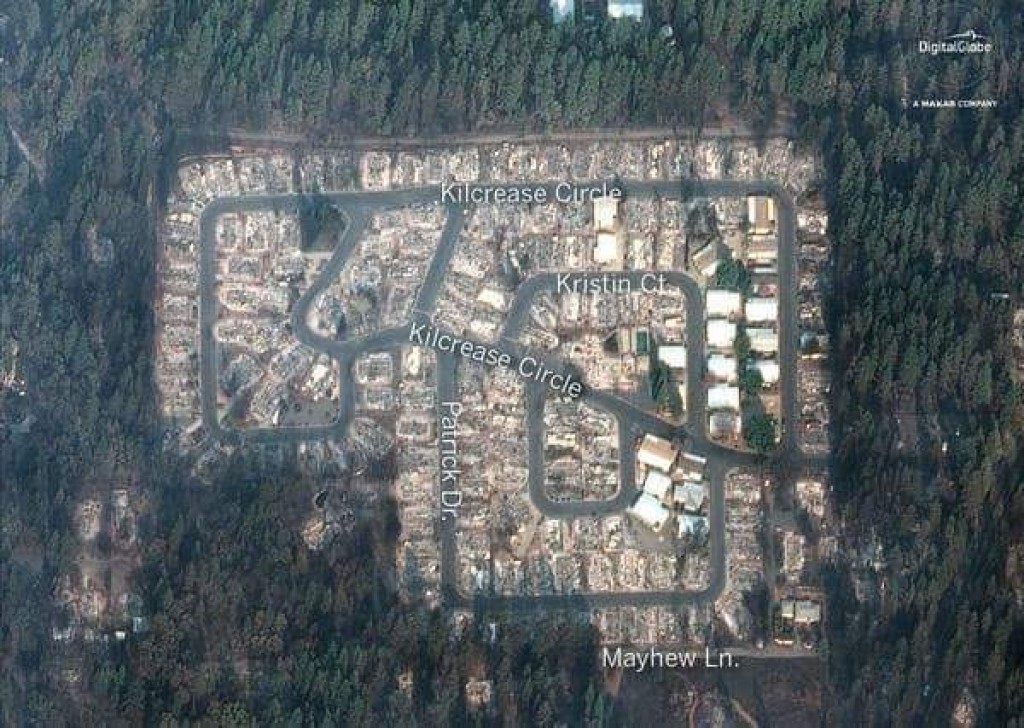 No, we'll call it what it is: murder. 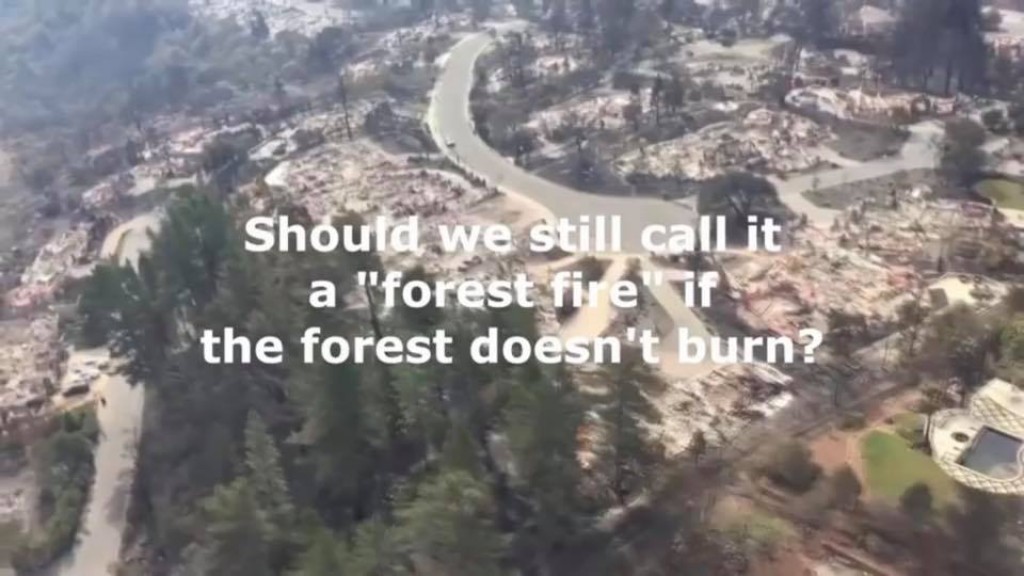 Because forest fires can burn half a house. It almost looks like it was laser cut. 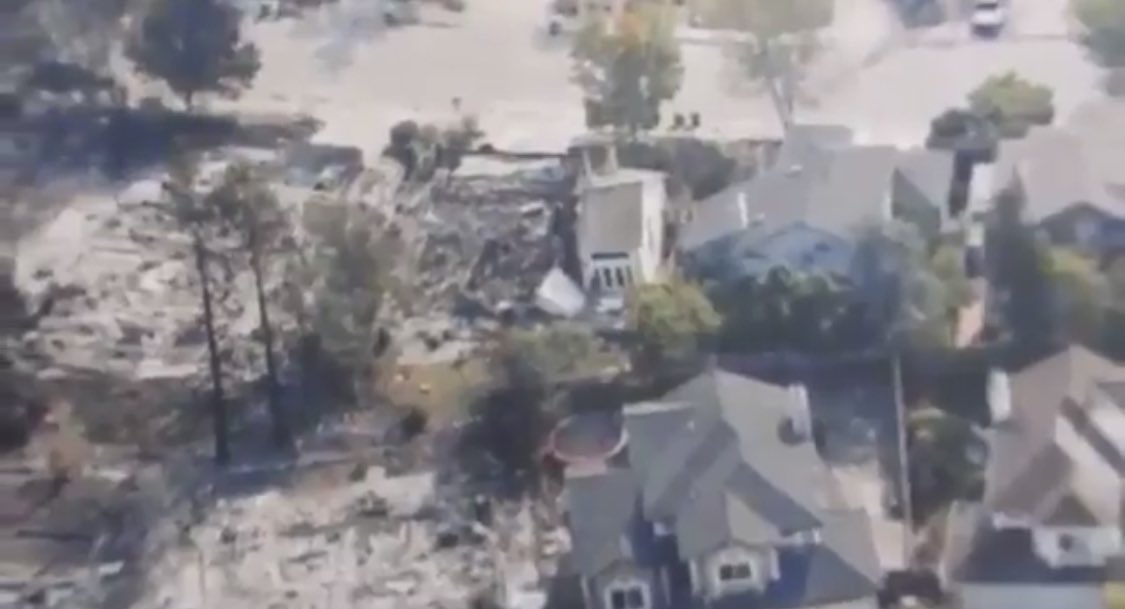 So explain how the forest fire skipped burning the forest and burnt this community of homes instead? OH! And the trees on the properties didn't burn either? 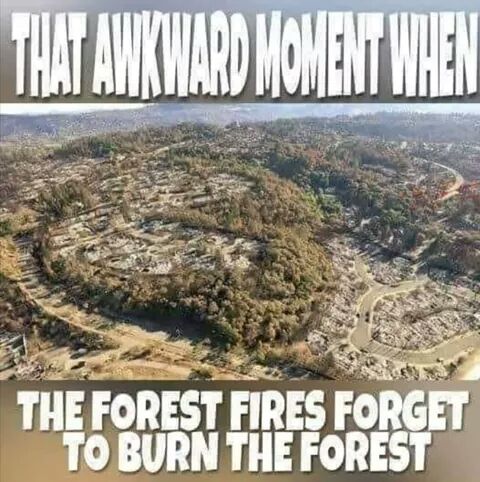 The first image is legitimate. It is of a Paradise CA neighborhood after the Camp fire raged through the town (KTVU).

The third image definitely is not of Paradise CA. This image was used three months prior to the Camp fire in support of a conspiracy theory regarding the use of directed energy weapons in these fires (conspiracy theorist).

Addressing the legitimacy of the images is not key to the question, nor is the conspiracy theory that prompted the question. The question at hand is

How can a forest fire burn homes in the center of a forest without burning the trees?

Not all wildfires are canopy (or crown) forest fires. Most forest fires, including the one that ignited Paradise CA (Curwen), are surface fires that burn grasses and other low-lying plants, but not the trees themselves (Graham). The ponderosa pine trees of the Sierra Nevada are fire resistant, having very thick bark and no branches until halfway up the tree (Graham). Those surface fires can be beneficial to California's forests. The fire burns away competition and provides nutrients.

The phenomenon in Paradise that Pangburn described — the fire spreading from structure to structure, tree canopies intact — is not unique to the Camp fire.

Fire behaviorists have documented it throughout the West, most recently in the aftermath of the firestorms that ravaged Northern California last year. In spite of this, the popular perception is that wildfires burn through these communities like a wall of flames. In fact, small, burning embers — firebrands — blown in advance of the fire are the primary cause of structural fires.

From the images in the question and elsewhere, it's obvious that the fire that started the conflagration in Paradise was not a canopy fire. From Hennig,

"Our perception is that this wall of fire comes through and destroys everything, and yet what I'm seeing is that there couldn't have been a wall of fire," Cohen told Stephen Quinn, the host of CBC's The Early Edition.

"The thing that would have carried the wall of fire is still there: The trees are still there and the structures are destroyed."

Instead of a wall of flames descending, burning embers blow downwind and ignite many spot fires over a wide area.

"That's how the whole area can be burning at the same time," Cohen explained.

Not the answer you're looking for? Browse other questions tagged united-states photography social-media fire .

8
Are these nude photos of Barack Obama's mother?
22
Are the 3 World Trade Center towers the only steel-framed high-rises to collapse due to fire?
8
Is federal firefighting the cause for the increase of US forest fires and their severity?
13
Do these photos from the Civil Rights Era show Bernie Sanders?
20
Were these photos of presidential inauguration crowds taken at the times claimed on the photos?
27
Did CNN use these 3 different photos of the same girl being rescued?
38
Are these photos of protests posters against the Obama Administration real?
6
Are the 2019 Amazon rainforest fires only 7% higher than the 10 year average?
41
Are environmentalists largely responsible for Californian forest fires?

// TODO sg: TMP solution until we are confident in our current implementation of async imports // once we are, we can move the if into the js entry file and dynamically load the mark obsolete module