Are most cases of polio derived from the polio vaccine?

According to this National Public Radio article:

So far in 2017, there have been only six cases of "wild" polio reported anywhere in the world. By "wild," public health officials mean the disease caused by polio virus found naturally in the environment. By contrast, there have been 21 cases of vaccine-derived polio this year.

Are the claims in this article accurate?

Numbers not exact, ratio plausible. This is a success story.

The WHO provides a queryable database on AFP / polio. I am a bit unclear on the exact meaning of the headers, so I'll list the 2017 global totals for all columns:

This graph visualizes the progress of polio eradication: 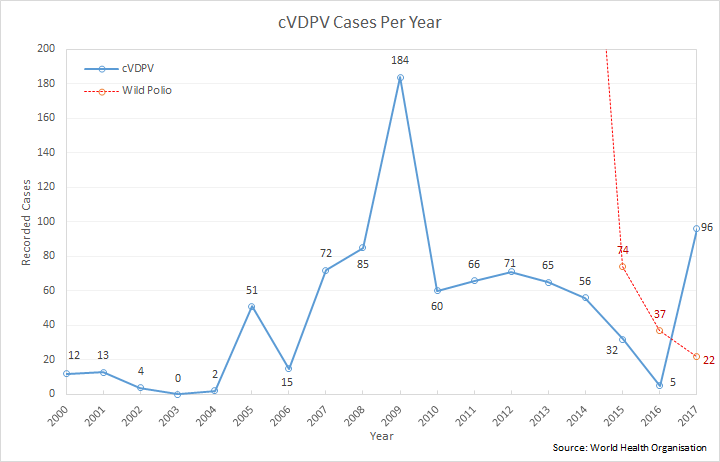 Quoted from the WHO page, emphasis mine:

It takes a long time for a cVDPV to occur. Generally, the strain will have been allowed to circulate in an un- or under-immunized population for a period of at least 12 months. Circulating VDPVs occur when routine or supplementary immunization activities (SIAs) are poorly conducted and a population is left susceptible to poliovirus, whether from vaccine-derived or wild poliovirus. Hence, the problem is not with the vaccine itself, but low vaccination coverage. If a population is fully immunized, they will be protected against both vaccine-derived and wild polioviruses.

Since 2000, more than 10 billion doses of OPV have been administered to nearly 3 billion children worldwide. As a result, more than 13 million cases of polio have been prevented, and the disease has been reduced by more than 99%. During that time, 24 cVDPV outbreaks occurred in 21 countries, resulting in fewer than 760 VDPV cases.

Actually they felt they could remove the most problematic strain of the virus from the vaccination:

Until 2015, over 90% of cVDPV cases were due to the type 2 component in OPV. With the transmission of wild poliovirus type 2 already successfully interrupted since 1999, in April 2016 a switch was implemented from trivalent OPV to bivalent OPV in routine immunization programmes. The removal of the type 2 component of OPV is associated with significant public health benefits, including a reduction of the risk of cases of cVDPV2.

So allowing for the latency mentioned for cVDPV to actually occur, vaccine-derived polio cases can be expected to go down as well.

Not the answer you're looking for? Browse other questions tagged medical-science vaccines .

3
Has the polio vaccine used in India from 2005 onwards caused hundreds of thousands of cases of paralysis?
2
Are the only remaining polio cases in Africa vaccine-derived?

20
Do "new documents" change anything about the Wakefield/MMR vaccine paper/retraction/fraud situation?
24
Was SIDS unheard of before "modern vaccine schedules"?
33
Are "pox parties" safer than vaccines for children?
12
Did 25 people die because of H1N1 vaccine of 1976?
12
Is the hunt for Osama bin Laden responsible for the setback(s) in Polio eradication?
15
Did the lead developer of the HPV vaccine come out against it?
2
Was human DNA found in a sample of Priorix Tetra MMRV vaccine?