In the U.S., is more water used for electric generation, and more electricity used for water infrastucture, than anything else?

Today I received an e-mail message regarding an upcoming Energy Water Nexus Technical Conference that made this unsupported claim:

Nationally, the largest category for water consumption is electric power generation. Similarly, the largest demand for electricity is water extraction and distribution.

Given the amount of farms and lawns in the U.S., I would expect crop irrigation to be the biggest water user. And, given the population and climate in much of the country, I would expect space conditioning (heating/cooling/ventilation) to be the largest user of electricity.

No, the claim is faulty on both parts

Using the US Geological Survey report on Estimated use of water in the United States in 2015, we quickly see that the original claim that thermoelectrical power-plants consume the most water is not correct.

Table 2A shows that thermoelectrical power plants do withdraw 133,000 Mgal per day, and that is on par with irrigation, and those two together are the top withdrawers. But 96-97 percent of the water that power plants withdraw is discharged back into the environment and is available for use downstream without further treatment. The consumptive use is only 4,310 Mgal per day (Table 12).

So when the original claim says that:

As for usage of electricity, the claim that making water available is the largest consumer of electricity: no, that is not true either.

As explained by United States Energy Information Agency, the Commercial, Industrial and Residential(**) sectors share about equal parts of electricity use.

...and the commercial sector is listed as using electricity for the following:

So water treatment and water transportation do not even have their separate posts, but instead get sorted in under misc. uses, presumably using less electricity than the 0.6% listed — in the commercial sector only, not 0.6% of all use — for water heating.

Hence that part of the claim is wrong too.

The original claim is the following...

So what is an Energy Water Nexus? Turns out Wikipedia has a page on that...

There is no formal definition for the water-energy nexus - the concept refers to the relationship between the water used for energy production, including both electricity and sources of fuel such as oil and natural gas, and the energy consumed to extract, purify, deliver, heat/cool, treat and dispose of water (and wastewater) sometimes referred to as the energy intensity (EI).

Further down the page, we find the following. Emphasis is original, bold is my addition.

Water can either be used or consumed, and can be categorised as fresh, ground, surface, blue, grey or green among others. Water is considered used if it does not reduce the supply of water to downstream users, i.e. water that is taken and returned to the same source (instream use), such as in thermoelectric plants that use water for cooling and are by far the largest users of water. While used water is returned to the system for downstream uses, it has usually been degraded in some way, mainly due to thermal or chemical pollution, and the natural flow has been altered which does not factor into an assessment if only the quantity of water is considered. Water is consumed when it is removed completely from the system, such as by evaporation or consumption by crops or humans. When assessing water use all these factors must be considered as well as spatiotemporal considerations making precise determination of water use very difficult.

So, in the context of talking about Energy Water Nexus / water-energy nexus, there is indeed a vital difference between claiming water has been "used" or if it has been "consumed".

The only way the claim about thermoelectric plants and water can be true is if whoever wrote that flyer made a mistake, and erroneously wrote "consumption" when they actually meant "usage". I personally find that to be either unlikely, or really embarrassing on part of someone that supposedly calls to a conference on the subject and thus should know the difference.

And no matter that, it still does not make the second part of the claim — about electricity being used the most for producing and moving water — true.

The following graphic, from the same Wikipedia page... 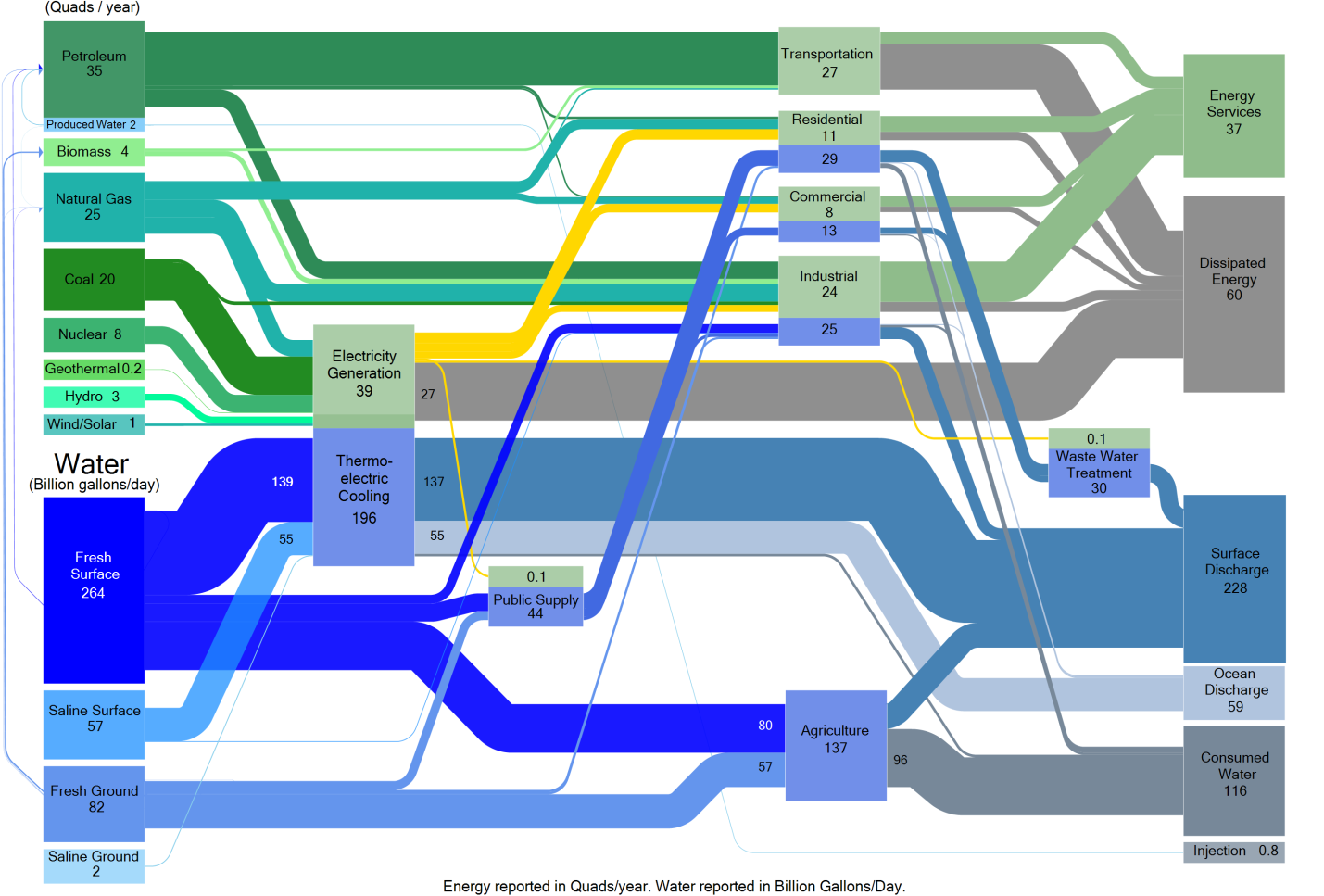 ...shows that electricity usage to produce water and waste waster treatment is 0.1 and 0.1 Quads per year (0.1 Quad = 29 TWh) respectively, while other usage of electricity is substantially more.

The same graphic also shows a very tiny portion of water leaving the "Thermoelectric Cooling" box and going into the "Consumed Water" box. The sums of other connectors means that — according to that graphic — water is consumed at a rate of 2,000 Mgal per day out of 196,000 Mgal/day used for thermoelectric cooling.

(**) Anyone else get SimCity vibes from that? :D

Apparently the claim is mostly correct, and hydroelectric dams have little to do with it. Impounded water that falls through a turbine doesn't count as consumption. Thermoelectric consumption of water instead involves turning (somewhat) usable liquid water into one of the following: Water vapor for cooling that goes into the atmosphere, somewhat unusable waste water that is treated as sewage, or quite unusable toxic waste water that needs significantly more treatment than mere sewage. The vast majority of the consumed liquid water is converted to vapor.

Since 1950, the US Geological Survey has produced a report on estimated water use in the US once every five years. The most recent is Estimated use of water in the United States in 2015. This document lists hydroelectric generation as the number one consumer, followed closely by irrigation. The following graphic is from that document. 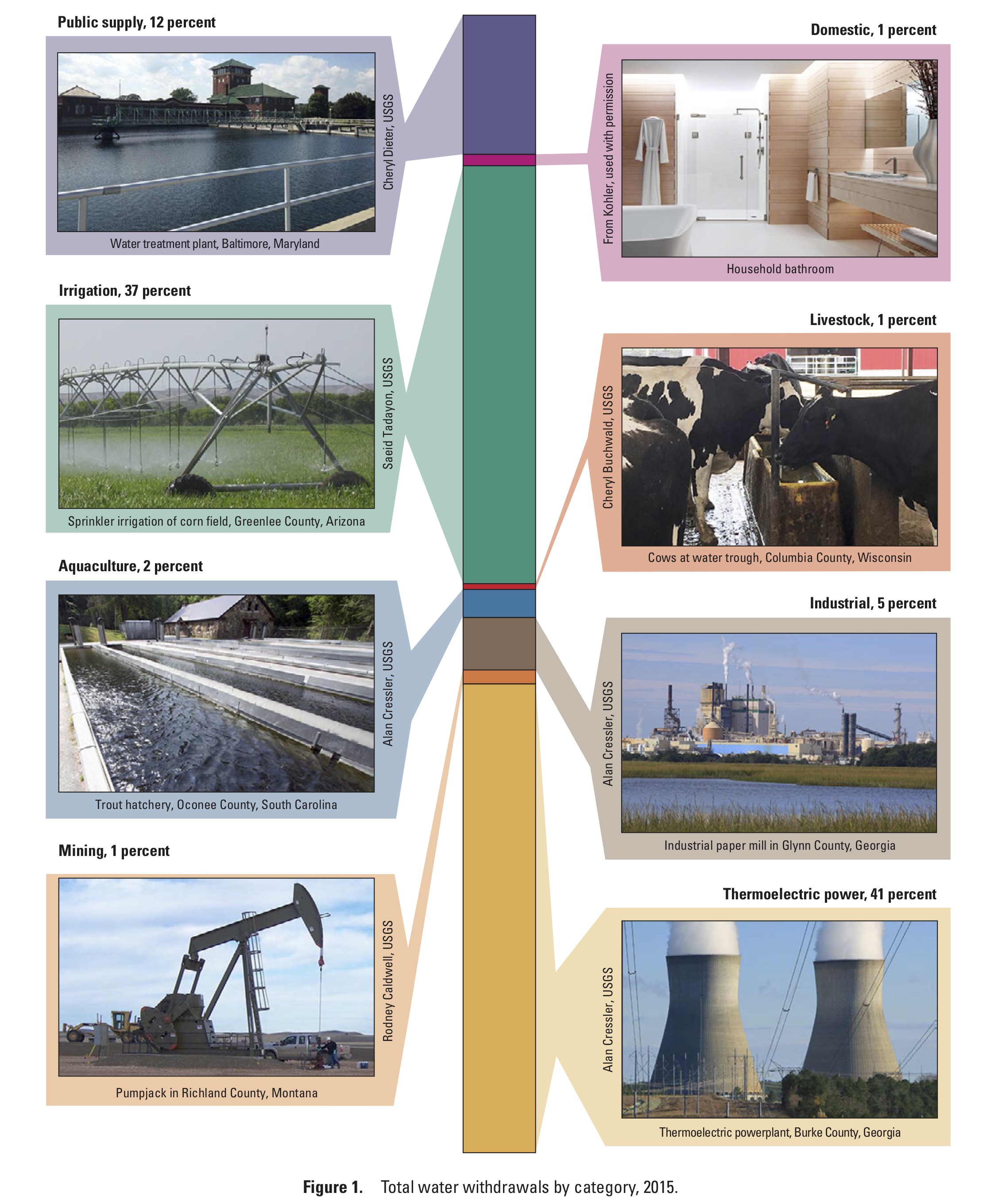 Not the answer you're looking for? Browse other questions tagged united-states water power-generation .

33
Can anything be 'more hydrating than water'?
30
Does Apple have more cash reserves than the U.S. government?
35
Are there more people with genius IQs living in China than there are people total in the U.S.?
17
Are guns in the USA used 80 times more often to protect life than to take it?
29
Have more U.S. senators been arrested for sexual misconduct in bathrooms than trans women?
4
Were additional fencing and magnetometers used on the National Mall for Trump's inauguration?
8
Did the USA used to have more guns per person than it does now?
9
Has the consumption of electricity, steel, copper, gold, water, paper, etc… decreased or flatlined in the U.S. since around 2009?
80
Have China and India more than doubled carbon emissions since 2000 while U.S. emissions have fallen?
7
Do the 2020 votes for Trump and Biden add up to more than the total number of votes made?