I was reading this article, and it's honestly better cited than a lot of things I read, but one of the claims it includes contradicts my expectations. Specifically, this claim:

“With the move to permanent villages and the increase in food supply, the population began to grow. Giving up the nomadic lifestyle enabled women to have a child every year. Babies were weaned at an earlier age – they could be fed on porridge and gruel.” [1]

But, Noah Harari notes that this pursuit of an easier life led to unintended consequences:

“The extra hands were sorely needed in the fields. But the extra mouths quickly wiped out the food surpluses, so even more fields had to be planted. As people began living in disease-ridden settlements, as children fed more on cereals and less on mother’s milk, and as each child competed for his or her porridge with more and more siblings, child mortality soared.”

Based on the context in the article, the agricultural revolution being described is the Neolithic Revolution around 10,000 BC. The source of the claim is listed as the book "Sapiens: A Brief History of Humankind" by Yuval Noah Harari, but I don't have access to that book in order to check that.

The specific thing I'm questioning is that during the agricultural revolution "child mortality soared". That seems extremely counter-intuitive to me, since I would expect increased consistency and availability of food and shelter to have a positive effect on mortality rates. Additionally part of the reasoning listed seems to be a cycle of "need more food -> need more people to farm the food -> need more food for those people" but I had thought the entire premise of the Neolithic Revolution is explicitly that people would be able to farm more food than they could consume, meaning that the "more people" step would increase food production more than enough to cover those people rather than ending up back at needing more food.

However, all of that is just "my logic" and vague memories from history classes I didn't really pay close attention to. I can't be confident with just that, so did infant mortality rates increase substantially during the Neolithic Revolution?

Probably someone can give a more detailed answer, but skeletal data seems to support this increase; form Bocquet-Appel, Science, 2011:

During the economic transition from foraging to farming, the signal of a major demographic shift can be observed in cemetery data of world archaeological sequences. This signal is characterized by an abrupt increase in the proportion of juvenile skeletons and is interpreted as the signature of a major demographic shift in human history, known as the Neolithic Demographic Transition (NDT).

There's also a graph in the paper on this: 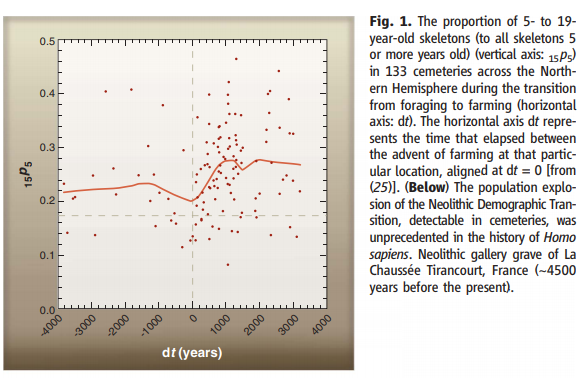 [The photo mentioned in the caption is just a bunch of bones, so I've omitted it here.]

Keep in mind that it went hand in hand with an increase in fertility though. Actually the Bocquet-Appel paper discusses this:

When compared with the Contemporary Demographic Transition (CDT) as described for Western industrialized societies, the NDT was its mirror image. In the CDT, the decline in mortality was followed by a decline in fertility, but in the NDT, increased fertility was followed by increased mortality. The CDT is slowing the growth of the world population, but the NDT was its springboard. In both cases, however, the time lag between the two stages produced an interval in which fertility exceeded mortality and resulted in a rapid increase in the population.

A more reserved paper by Gage & DeWitte (2009) notes that

About the only issue that is reasonably certain is that fertility exceeded mortality for some period of time during the transition so that populations grew. The idea that mortality and fertility increased (the consensus view) is based on indirect evidence and assumption.

I'll also note the title of your question (incorrectly) asks about infant mortality, but the quote you gave (and seemingly still doubt) is about child mortality, which is the topic of the Bocquet-Appel (and other) papers on the NDT. Infant mortality is defined as the death of children under the age of one year; child mortality typically refers to deaths under 14 years; in the Bocquet-Appel paper this is extended to 19 years.

Not the answer you're looking for? Browse other questions tagged history mortality agriculture .

43
Is the number of childhood vaccines correlated with infant mortality?
5
Did the Britons stop growing crops in the time between 3300BC & 1500 BC?
5
Did the British attempt to rename the Taj Mahal?
24
Are people dying of starvation because we cannot produce enough food?
30
Did people in ancient times, who survived childhood and were not killed in wars, have roughly the same chance to reach old age as contemporary people?
5
Does excess salt in food cause thousands of deaths per annum in the UK?
69
Is the infant mortality rate among African-American babies in Youngstown, Ohio greater than that of babies in Iran?