Are 2 million Uighurs and Muslim minorities put into political camps?

Gay McDougall, a member of the U.N. Committee on the Elimination of Racial Discrimination, cited estimates that 2 million Uighurs and Muslim minorities were forced into “political camps for indoctrination” in the western Xinjiang autonomous region.

The current Chinese position seems to be:

A Chinese official told the committee tough security measures in Xinjiang were necessary to combat "extremism and terrorism", but they did not target any specific ethnic group or restrict religious freedoms.

Is there evidence for Gay McDougall claim that China interns that many Uighurs and Muslim minorities?

The Chinese government has admitted the existence of these camps, claiming that they are for "anti-extremist ideological education, psychological correction, and behavior correction". If they ever put out official figures for how many people have been admitted to the camps, I will edit this answer and make note of it here.

The population of Xinjiang is 1.5% of China's total population, but in 2017, 21% of all arrests in China were made in Xinjiang, a total of 227,882 people, according to official Chinese figures. These figures show a 700% year-on-year increase in arrests. The type of sentencing for these arrests was not specified.

From January to March 2018, 461,000 residents in Xinjiang villages were "relocated" according to a report in Global Times. The specific destination of these residents was not specified other than "other parts of the region."

The first of Adrian Zenz's sources is Mizutani Naoko 水谷尚子, currently an associate professor at Meiji University. Mizutani comes from an anti-imperialist angle, beginning her research with a vindication of the Japanese war crime testimonials given by the Association of Returnees from China, which was positively reviewed in Japanese academic journals. Her research specialized in using Chinese sources to elucidate the relationship between the Nationalists and Communists in the 20th century. Starting in 2007 she became a critic of modern colonialist techniques in Xinjiang and published a book based on interviews with dissidents.

The figures used by Mizutani in her Newsweek article were obtained by the Istanbul-based Uyghur dissident source Istiqlal TV. However, Mizutani herself did not naively accept the numbers but cross-referenced them against publicly available data on total Uyghur populations and her own knowledge of Xinjiang administration:

This table records camp inmates by prefecture, and is missing values for cities such as Ürümqi, Hotan, and Yining (Ghulja). Chinese administrative divisions rank prefectures below cities. The administrative units at the level of large central cities may vary in method of control, so we may assume that the public official who leaked this data is charged with managing data at the prefectural level [only].

She adds that the data was likely current as of late 2017. Zenz uses these prefectural figures of 892,000, 12.3% of the prefectural population, and combines them with public data on the Uyghur population in cities to extrapolate a total figure of 1,060,000.

Mizutani continues to speak out about this issue, most recently discussing oppression of Uyghurs in an interview with the Communist Party of Japan.

Zenz's second source is a Radio Free Asia article, but it is not based on an anonymous leak like the Istiqlal TV data. The source is not named but is explicitly identified:

The security chief of Kashgar city’s Chasa township recently told RFA on condition of anonymity that “approximately 120,000” Uyghurs are being held throughout the prefecture, based on information he has received from other area officials.

“I have great relationships with the heads of all the government departments and we are in regular contact, informing each other on the current situation,” he said, adding that he is also close with the prefecture’s chief of security.

Tens of thousands of people are detained within Kashgar city alone, the Chasa township security officer said, citing statistics from the city’s subdistricts.

It would be very easy for the Chinese government to refute this statistic: simply provide the name of the security chief of Kashgar city’s Chasa township in January 2018 and have him deny the comments. I do not see evidence that this has happened.

Zenz also cites another RFA article with the bare statistic that

A staff member who answered the phone at Bayanday’s No. 3 Village committee told RFA on condition of anonymity that his office had been instructed to send “10 percent” of the 4,131 residents living in 1,073 households under its supervision to re-education camps.

This claim, too, would be easy to debunk by producing a specific number for Bayanday’s No. 3 Village. No one has done so.

Zenz's group also conducted anonymous interviews with Xinjiang residents which he used to confirm his figure of roughly 10% of the Uyghur population being imprisoned.

Additional evidence such as satellite photos of camps is available in this ChinaFile article and this Quartz article.

edit, March 2021: Additional evidence uncovered since this answer was written in mid-2020 have been compiled into an independent investigation by the Newlines Institute for Strategy and Policy.

This BBC report covers a Chinese official explaining that "education centres" are necessary to prevent terrorism. Another BBC report describes how new prison complexes in the area have been mapped. The Chinese government denies that these are prisons, describing them as "re-education facilities", but with high walls, razor wire and guard towers they look an awful lot like prisons. Reporters are not allowed to go anywhere near them to find out.

From the second report:

Pages of local government tendering documents inviting potential contractors and suppliers to bid for the building projects have been discovered online by the German-based academic, Adrian Zenz.

Cross-referencing this information with other media sources, Zenz suggests that at least several hundred thousand and possibly over a million Uighurs and other Muslim minorities could have been interned for re-education.

The estimates of the number of detainees are based on the size of these facilities, so the error bars are rather large. However most governments want to house prisoners as cheaply as possible, so the upper end seems more likely than the lower end. As such an estimate of 1-2 million seems perfectly plausible.

The evidence for that claim comes from only one or two sources which have a clear conflict of interest in geopolitical matters relating to China, and no further independent research has verified their results. Leaked internal documents from the Xinjiang administration put the figure somewhere in the low thousands.

Zenz's methodology of extrapolating figures obtained from hearsay is deeply flawed and requires rigorous independent verification to be credible.

To be charitable, we have unverified claims by two or more geopolitical opponents of China being used by a religious zealot, which is then sourced by news media as a reliable academic source. Zenz being a zealot does not discount the value of any rigorous scientific work he does, but that is clearly not the case. There is a clear conflict of interest violation taking place in this paper and associated body of research.

Alternatively dubious estimates in news media articles (such as the BBC report) are based on Google Earth imagery of buildings in Xinjiang and a number of volatile assumptions, such as:

So what is a more realistic number?

Leaked documents obtained by ICIJ suggest a radically different scale of political persecution. One document, titled "Bulletin #2", says that there were "4,314 Xinjiang people" who passed a preliminary screening to warrant investigation into possible ties with the violent separatism the region has been experiencing. Of those, "1,707" were currently residing in Xinjiang and warranted special investigation.

The later "Bulletin #20" expands the screening to include all 1.8 million users of a particular media-sharing software, of which 40,557 were deemed "high-risk" (having prior convictions, etc.). The bulletin explicitly identifies the "East Turkestan Islamic Movement" as a principle concern.

These figures represent the upper-bounds of possible incarceration. Not all suspicious persons will end up being convicted of treason (leaked court document). As such, the scale of political (terrorist) prosecution is liberally in the 1,000-50,000 region according to these internal documents, considerably less than Zenz et al.'s unsubstantiated 2 million figure.

The leaked documents also provide no evidence that there is any ethnically-motivated internment taking place. The concern of the Chinese officials is solely with combating the threat of violent extremism relating to ETIM and associated groups. Claims of "genocide" are similarly unsubstantiated by the documents, which describe a modern prison system that emphasizes the health safety of inmates and staff (The "Telegram" document).

The 2 million figure lacked substantiation. The number is frequently attributed to UN but it was Gay McDougall, Committee Co-Rapporteur for China, who raised such figures during a UN CERD meeting on China (https://www.ohchr.org/en/NewsEvents/Pages/DisplayNews.aspx?NewsID=23452&LangID=E). She refered to “reports” but never identified the reports. The only prominent report on this matter citing a figure in the millions during this period was the article by Dr Adrian Zenz (https://jamestown.org/program/evidence-for-chinas-political-re-education-campaign-in-xinjiang/).

Zenz’s derived figures are based on projections from numbers largely taken out of context from so-called “leaked documents”. Many of these documents are simply news posts and normal reports that anybody can access. Zenz just arbitrarily calls them “leaked dcouments” for effect. Actually, if you do follow Zenz’s given links and read the documents yourself, you will see the majority of them tells a different story, often opposite to Zenz’s constructed narrative.

Zenz has been using this dubious “research method” up until now. Case in point: Zenz extracted a phrase from a news report with the words “organised” and “mobilised”, and used that as “evidence” that China has been mobilising Uyghurs in an organised manner, so that must be forced labour! This was quoted by BBC in their well-publicised article “China’s tainted cotton”(https://www.bbc.co.uk/news/extra/nz0g306v8c/china-tainted-cotton).

But anyone who can read Chinese would see the characters “淘金” at the end of the quoted phrase that literally means “gold-digging”! I simply typed the Chinese phrase in Google and located the original document, which is a Sina news post (https://news.sina.cn/gn/2018-09-18/detail-ihkhfqns4300121.d.html?isJump=0&universallink=1&from=wap) that detailed 54000 Xinjiang workers heading out to cotton picking to dig gold and there was a celebratory party (欢送会) seeing off the first batch of workers. The report also said the state organised child-care centres, even cattle-care centres so the workers have less to worry during their 2-3 months away making money.

Similar methods were used by Zenz in deriving the figures in his 2018 report. Figures derived in this manner is highly questionable. Unless McDougall can properly identify her sources for the 2 million figure she publicly cited in UN and the reports themselves verified, the 2 million figure can hardly be trusted. 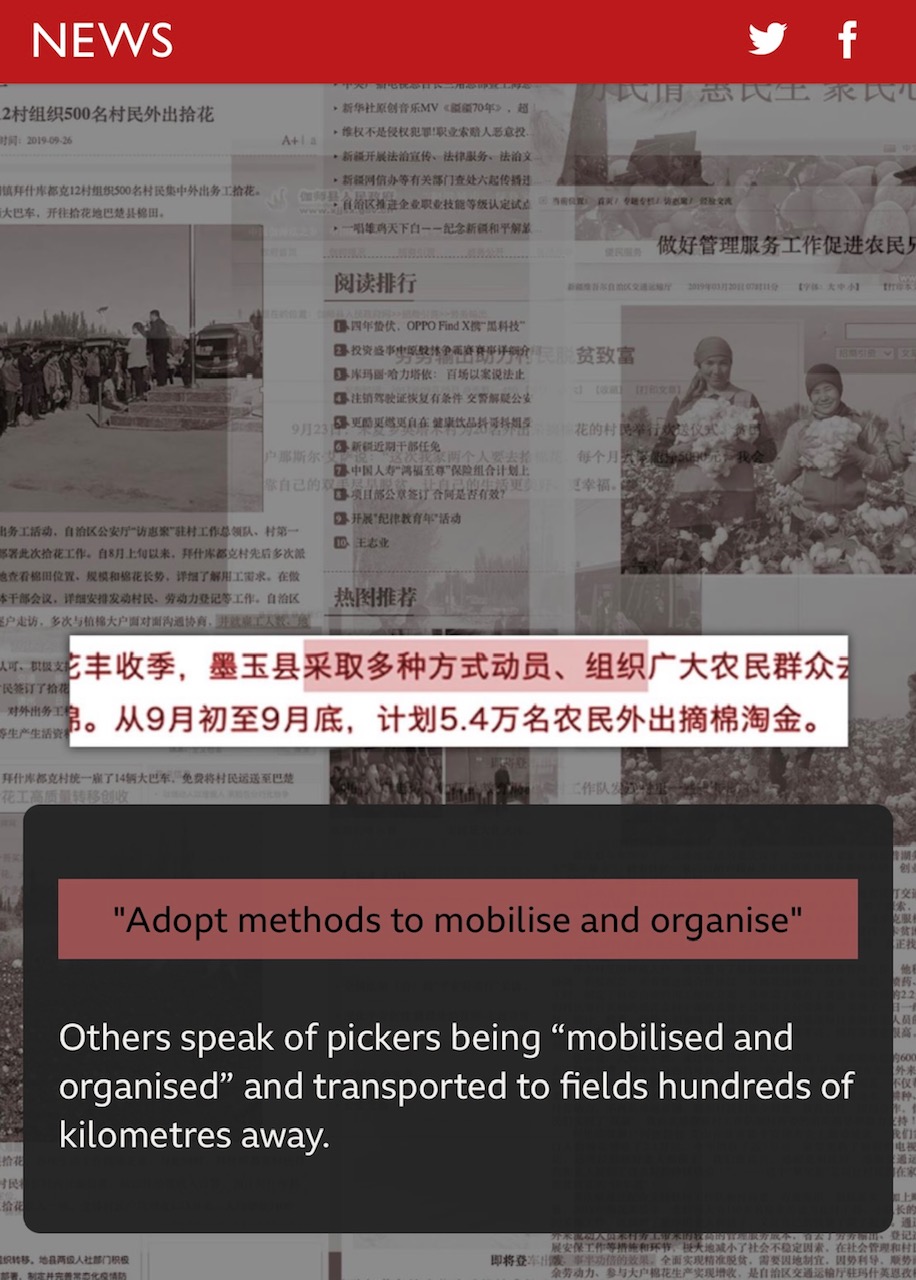 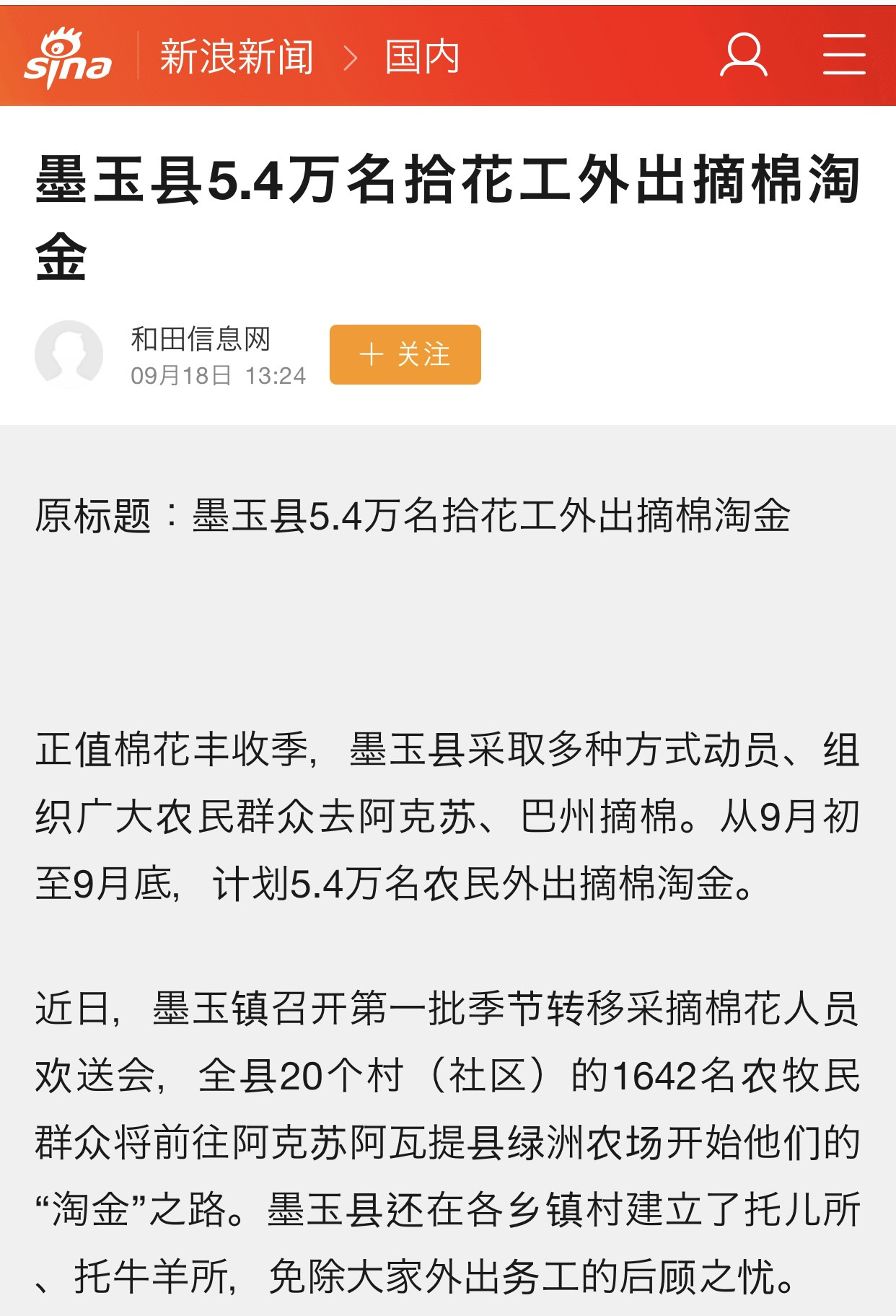 Not the answer you're looking for? Browse other questions tagged china genocide .

8
Did the US government accuse China of genocide against Uyghurs based on a single report?