Did Otto Warburg make this claim about diseases in an alkaline environment?

I came across the following quote, alledgedly by the biochemist Otto Warburg:

No disease, including cancer, can exist in an alkaline environment

or its German counterpart:

The meme is circled in social media as can be seen by this collage of images repeating this quote: 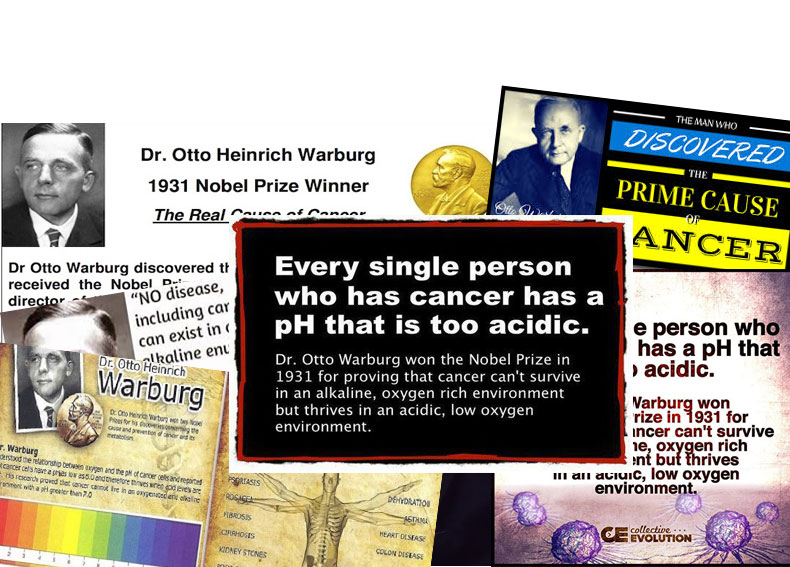 Searching google for this quote, I come across innumerable "alternative medicine" sites which use this as evidence that "alkaline diet" can prevent cancer.

Other sites, including the source of the above picture claim he didn't say that.

Did he say this? Does that mean he believed in the "alkaline diet"?

EDIT This question seems to be about the same topic, but does not feature the quote.

It was a different claim, and that claim is not validated

First, you cannot mess around with the body's pH value, because you die if you do. The pH value of blood must be between 7.35 and 7.45. And the body is quite good at regulating this. Hence, you cannot make the body into "an alkaline environment".

Second, Nobel laureate Otto Warburg did observe something that we now know as the Warburg Effect, that is present in many cancers (but not all, and not neccessarilly).

Warburg's hypothesis was postulated by the Nobel laureate Otto Heinrich Warburg in 1924.[3] He hypothesized that cancer, malignant growth, and tumor growth are caused by the fact that tumor cells mainly generate energy (as e.g., adenosine triphosphate / ATP) by non-oxidative breakdown of glucose (a process called glycolysis). This is in contrast to healthy cells which mainly generate energy from oxidative breakdown of pyruvate. Pyruvate is an end-product of glycolysis, and is oxidized within the mitochondria. Hence, according to Warburg, carcinogenesis stems from the lowering of mitochondrial respiration.

Put in his own words, "the prime cause of cancer is the replacement of the respiration of oxygen in normal body cells by a fermentation of sugar."

So you can see that Warburg's Hypothesis is a lot more sophisticated than just claiming that if you tinker with the pH value of the body you can prevent all disease.

Hence the answer to the question is: no, Otto Warburg did not say that having a too acidic body is the cause of all illnesses, nor that an alkaline diet can cure all disease.

Unfortunately, Warburg's words have been twisted in other ways as well and some people have taken them to mean that "sugar feeds all cancers" and that if you can just get rid of sugar, then you prevent cancer. Warburg did not say that.

Is the hypothesis accurate?

There is no strong evidence for the Warburg Hypothesis yet, but it has not been entirely discredited either. Warburg formulated his hypothesis before humankind had any knowledge of DNA and molecular biology. We simply did not know that our genes could get scrambled by various mechanisms, such as viruses, radiation and several other factors, and that this can cause cancer. After that discovery however, it is generally thought that gene damage is the genesis of cancer, and that the Warburg Effect is simply a consequence of cancer and not a cause of it, which Warburg thought. That is not to say that the Warburg Hypothesis could not have some influence on DNA damage as the cause of cancer, but as the one-stop-shop to cure all cancers, no... there is no evidence for that.

Several articles collected on this page discuss the hypothesis.

This position became known as the Warburg Hypothesis. With the discovery of oncogenes and the rise of the molecular biology of the gene, and the gene-centric emphasis in evolution, Warburg's Hypothesis was believed discredited and was neglected. However, Warburg never discounted the role of genetic initiators, and nuanced statements about the precise mode of causality and aerobic glycolysis probably suffered in translation from the original German. The misjudgment of the Warburg Hypothesis, dating back to the middle decades of the twentieth century, was probably based on a linguistic misinterpretation of the distinction between originating and proximate causality, and may well have cost us five or six decades in the war on cancer. Warburg, however, probably did err in his opinion that respiration in cancer cells was necessarily defective (Koppenol et al., 2011); it does appear that some degree of intact respiration can and does coexist with the accelerated and anaerobic glycolysis, which is typical of cancer cells.

Tumors exhibit a normal Pasteur effect; oxygen consumed is equally effective in inhibiting the formation of glycolysis end products in malignant and normal cells (Wenner, 1975; Vaupel, 1979). Possibly the strongest data ranged against the Warburg hypothesis were obtained in a series of minimal deviation hepatomas, which exhibited low rates of aerobic glycolysis and respired at the same rate as normal liver (Wenner, 1975). Thus, aerobic glycolysis is not a fundamental feature of malignant tissues. Nevertheless, this metabolic pathway is a frequent feature of cancer cells and has been correlated with growth rate (Burk et al., 1967) and the degree of malignancy (Racker, 1976) of tumors. Increase in glucose consumption has also been associated with malignant transformation in vitro (Hatanaka and Hanafusa, 1970; Weber, 1973).

Mitochondrial Medicine: The Mitochondrial Biology and Genetics of Metabolic and Degenerative Diseases, Cancer, and Aging

Not the answer you're looking for? Browse other questions tagged quotes alternative-medicine alkaline-diet .