Do leftist groups claim that "the Caravan" was "cooked up by Republican operatives"?

Then it also says:

Misinformation is not isolated to the right. In some leftist groups, a theory is percolating that the whole migrant caravan could have been cooked up by Republican operatives looking to turn out more GOP voters.

What are these "some leftist groups"? One can find examples of someone saying any crazy thing on the Internet. But beyond that, are there any such claims put forward by established left-wing groups, or shared in any widespread manner in the media, social or otherwise?

We can't be sure what what it's referring to, but there have been some notable people who have implied that Trump could be behind the caravan. Nothing, however, indicates that there are any serious conspiracy theories about Republicans doing it. (On the other hand, the theory that Democrats are behind the caravan seems to be being taken seriously, since we're seeing a multitude of politicians comment that they believe it, and one has suggested using the DoJ to investigate.) 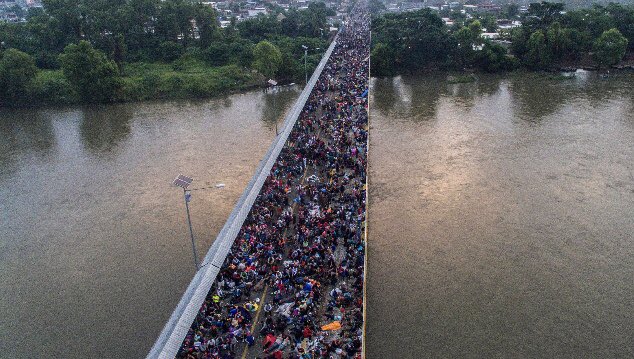 So here we have a beautiful aerial shot—just in time 4 the Midterms! And everyone falls for it. This is one of the most remote areas of the WesternHemisphere. Try finding a helicopter/drone down there to film this. You can’t. Trump’s genius is how he once again outsmarts the Dems

This is pretty clearly a conspiracy theory, although I'm not sure what he actually thinks Trump is doing (sending drones and helicopters to film things?), since he acknowledges that similar caravans have happened well before the Trump presidency:

This “caravan” has been going on for 20 years as refugees flee the violence of Guatemala, Honduras & El Salvador. Most end up in Mexico & are assisted by international refugee groups. Few walk the 1,000+ miles to the US. Trump is using this racist fear tactic to win the Midterms.

I'm not sure if there's anyone other than the right (to put it mildly) that is taking what he said as suggesting Trump is behind the caravan (instead of only suggesting that Trump manipulating the story to suit his needs). In any case, I can see clearly see buildings at the very top of the photo...

Alternatively, it might be referring to Van Jones (Democrat and host of CNN's Van Jones Show), who said:

I think it's much more likely that Donald Trump is paying for this than for George Soros to be paying for it. This is exactly the worst kind of thing to be happening in a moment like this because what it does is it gives another talking point to Donald Trump: "Look at these invading hordes, etcetera."

He was agreeing with Anderson Cooper who said that it wouldn't make sense to think that the Democrats were funding the caravan. Although Van Jones was smiling like he was joking about it being more likely that Trump is the one who funded it, it seems like some people are taking it seriously (example), although I haven't found any examples from people who would even remotely be considered left.

Maggie Haberman New York Times thinks that Trump is behind the caravan from Honduras, that Trump is the guy making all this happening. Ha! Ha! Ha! Don’t you love it?

Unfortunately, I'm not sure what he's talking about. I found no evidence to support that she said this or even that anyone besides him is talking about her saying this.

It's also possible that it's a (mis)interpretation of what one GOP operative said (which appears to be more broad than who's "masterminding" the caravan):

“Soros is probably not masterminding these people coming to the border,” conceded one GOP operative in an interview on Tuesday. “When it comes to allowing segments of the base to believe what they want to believe, it happens on both sides. Republicans are no more guilty of it than Democrats.”
Trump’s Own Team Knows His Caravan Claims Are Bullshit

Or it could be something else, but I haven't found anything else that's more notable than random people on the internet.

Not the answer you're looking for? Browse other questions tagged united-states politics immigration .

2
Do states give local governments the power to ban opposing political groups?
3
Was every Republican President since 1923 a Member of the Bohemian Grove?
49
Is there a "red shift" in U.S. elections — a significant shift to republican votes between polls and voting? Does this imply fraud?
18
In the USA, do supporters of the Republican party make more charitable donations than supporters of the Democrats?
36
Did 17 U.S. intelligence agencies claim that Russia was behind the DNC hack?
9
Does the Caravan have Middle Easterners?
5
Were Oscar and Valeria Martinez denied the ability to claim asylum at a port of entry?