For people who doubt radiometric dating, layer-counting may provide hard evidence for one or another minimum age of the earth. In its question-and-answer article on how the age of the earth is calculated, the website Biologos.org states:

The annual ice layers in glaciers provide a similar method [to tree-ring dendrochronology] that goes back much further in history. Each year, snowfall varies throughout the seasons and an annual layer is formed. Like the tree rings, this method can be verified by comparison to historical records for weather, as well as to records of volcanic eruptions around the globe that left thin dust layers on the glaciers. Scientists have drilled ice cores deep into glaciers and found ice that is 123,000 years old in Greenland and 740,000 years old in Antarctica. These annual layers go back much farther than the 10,000 years advocated by the young earth creationists. The Earth must be at least 740,000 years old.

"How are the ages of the Earth and universe calculated?" Biologos.org, emphasis added

This doesn't state outright that the annual ice layers go back 740,000 years, but it certainly implies it.

It was in 2005 that the researchers in Antarctica extracted a two-mile-tall plug of ice for historical climate research. While their purpose was to analyze the Earth's climate history by performing chemical analysis of the ice and not to determine the earth's age, it would by no means be impossible to learn something about the age of the earth from such a study.

...a team of researchers from the National Institute of Polar Research in Japan, drilled deep into an ice dome on the east Antarctic ice sheet called Dome Fuji. They extracted a core that spanned more than 700 millennia, including about seven cycles of glaciers warming, melting, and warming again.

The layers in the ice sheets are a lot like the rings in a tree stump: they can tell scientists about the environmental conditions when the layers formed. The presence of dust can indicate dry and windy periods, with gusts strong to blow debris in from South America. And the molecular compositions of the ice tells the scientists whether a layer formed during a warm or cold spell.

Besides all of the other work that they accomplished, has this Antarctica team (or any other) provided a layer-counting minimum age for the earth that is 700,000-years-or-greater without any contribution from radiometric dating? And if it's not 700,000+, then how far back is it?

The counting of layers such as tree rings, glacial varves, and annual ice layers, is a reliable way of establishing a chronology.

As far as the age of Earth is concerned, these methods provide a minimum age for Earth. Scientists do use radiometric dating to calibrate these methods from time to time—C-14 dating of some individual tree rings is an example—but layer counting firmly establishes an annual or seasonal count from the present into the past. With regard to the minimum earth age established by layer-counting, radiometric dating does not come into play.

How many layers have been counted?

Trees have been found having rings showing an age between 4000 and 5000 years, and some of these trees died a long time ago. By matching chemical and environmental qualities among trees at different ages, it is possible to construct a continuous environmental history to between 11,000 and 13,000 years ago. 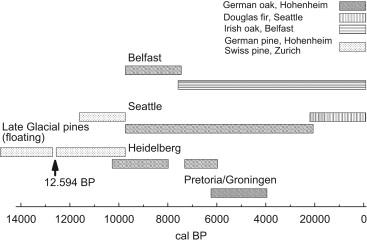 Glacial varves (the layered sediment at lake bottoms near continuously melting glaciers) have been found that clearly show 60,000 layers at Lake Suigetsu in Japan. Below this level, the layers are less distinguishable, but the age could be 150,000 to 200,000 years if you assume a uniform rate of sedimentation. 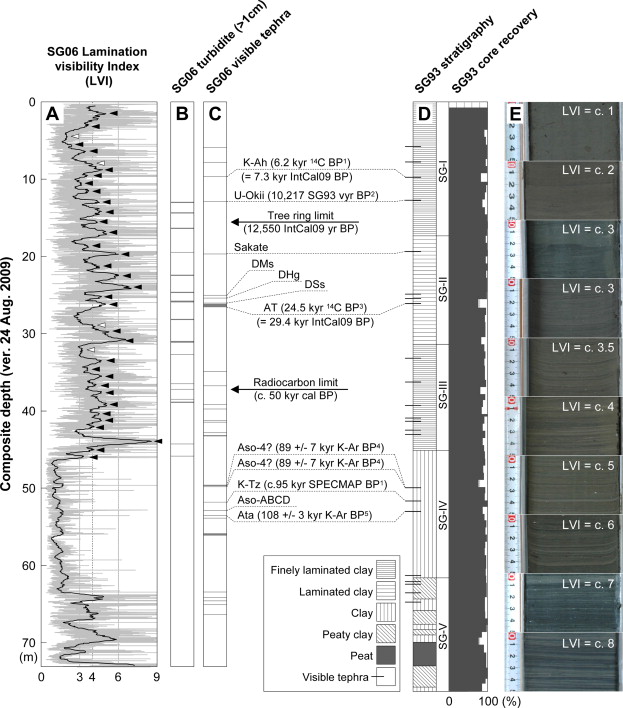 In 2007, scientists working in Antarctica cut out deep cores of ice from huge ice formations to learn about the climate of the past, providing approximately 740,000 years of history. But I was surprised to read that layer-counting was not done there in central Antarctica, because annual cycles are barely distinguishable. Instead, the history is dated by estimating the snow accumulation rate (together with information about static compression) and by matching various markers to other studies done previously. The researchers were pleased to note that up to 100,000 years, the markers provide excellent pattern-matching with two other Antarctica studies. 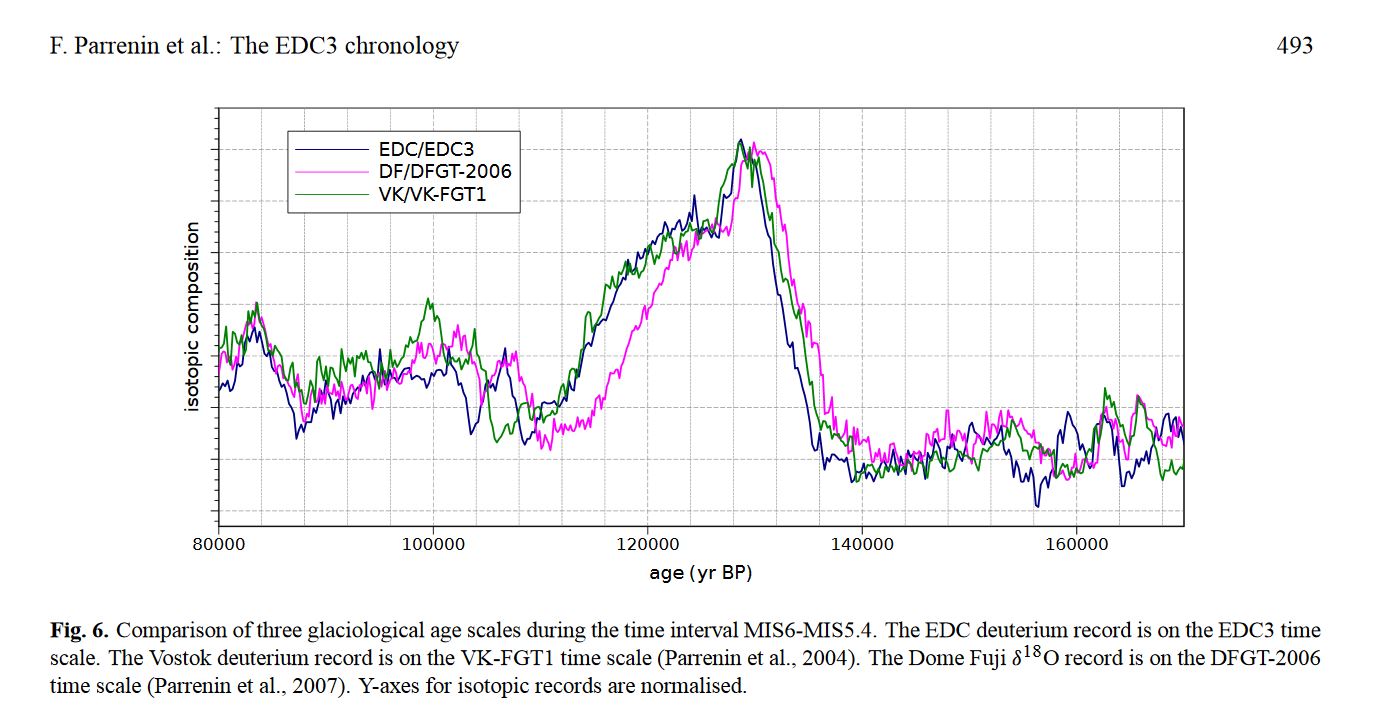 In 2005, scientists working in Greenland were able to count 42,000 layers back in time, providing a good basis for dates when combined with the other data that they recorded for each layer (and sub-layer to a very high resolution) such as chemical impurities, insoluble dust, and electrolytical conductivity. 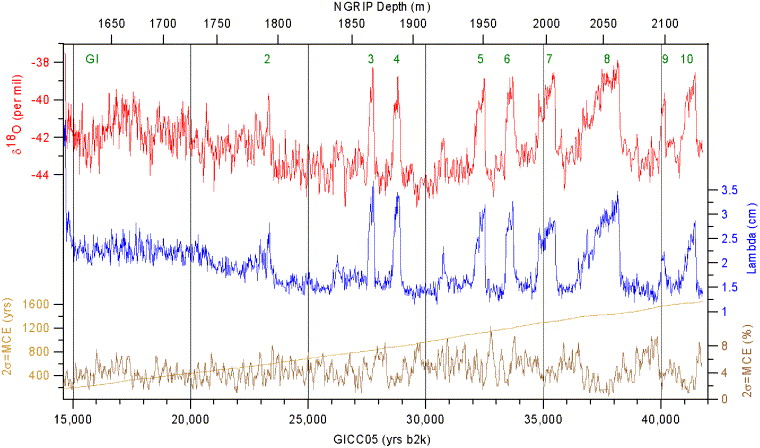 Only in Greenland and Japan have scientists found more than 40,000 layers; they found 42,000 in Greenland and 60,000 at Lake Suigetsu in Japan. Ages beyond these dates were estimated based on other methods, including the assumption of uniform rate of ice or sedimentation deposition and also radiometric dating.

Not the answer you're looking for? Browse other questions tagged geology young-earth-creationism .

55
Did hominids and non-avian dinosaurs ever coexist?

30
Is the Moon young?
8
Is Earth Crust Displacement real?
4
Could meteors have been been formed with lead, and mislead radiometric dating?
16
Have coelacanth fossils younger than 65 million years been found?
10
Are results of carbon dating cross referenced by other methods?