By browsing this, it is clear that the claims include acts of terrorism and war. (But being curiously selective about it, I found no reference to attacks by US or allied forces in Afghanistan, only the Taliban and their allies.)

There is no war going on in the US. There are very few terrorist attacks there. This means that, yes, it is safer in the US than many other places. Mass shootings in the US gain massive headlines, but aren't all that common, really, compared to war zones.

I jumped a bit at seeing Norway mentioned, since we are a peaceful country. Looking at the list, I see one single shooting. It turns out that in a small country with only 5 million people, a single shooting is enough to put us above the US. Technically correct, but hardly statistically significant. 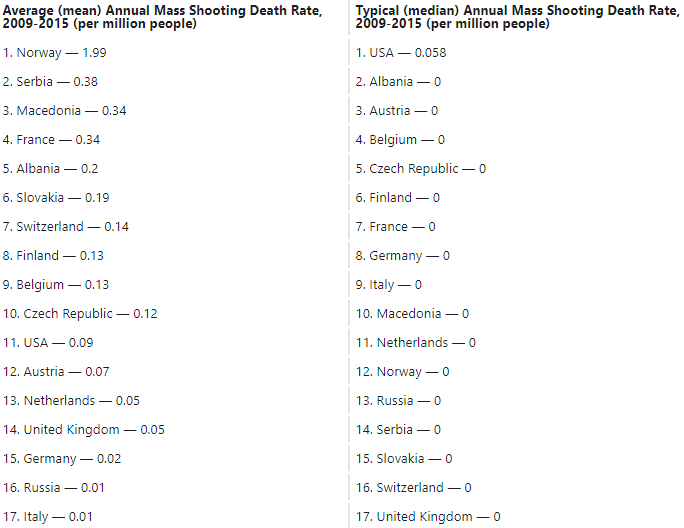 0
Is the USA “not even in the top 10 when one compares international death rates resulting from mass shootings”?
94
On average in the US, is there a mass shooting 9 out of every 10 days?
75
Is America “the only nation where this [a mass shooting] regularly happens”?
8
Are handguns used in 80% of mass shootings?

74
Did the National Rifle Association (NRA) block research into statistics related to gun control?
23
Is this graph of "mass shootings" backed up by reliable data?
19
Do Republican legislatures tend to relax gun laws after mass shootings?
8
Are handguns used in 80% of mass shootings?
6
Do illegal immigrants commit more murders than mass shooters?
3
Have 82 officers been charged for on-duty shootings since 2005?
75
Is America “the only nation where this [a mass shooting] regularly happens”?